Book Two of Strong Female Protagonist Is Killing It on Kickstarter 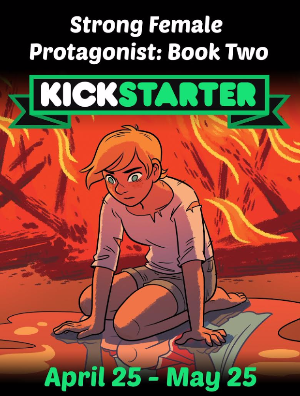 Strong Female Protagonist is one of the best webcomics around. The struggles of Alison Green, current college student and former Guardian, are enjoyable even for people who don’t typically get into superhero comics. Now Book Two of the collected comic has almost tripled its goal on Kickstarter within a couple days of going live.

This story is the work of writer Brennan Lee Mulligan and artist Molly Ostertag. Back in 2012, the friends decided to make a comic about an actual “strong female character”. I say “actual” because Alison Green is worlds apart from many of the women we see in movies who either have zero emotional depth or suddenly forget how to hero as soon as a dude steps on screen.

“We wanted to use the idea of a ‘strong female protagonist’ to make a comic character that was strong in every sense of the word,” says Mulligan. “So, Alison Green is strong in terms of heroism and moral conviction, she’s super strong and invulnerable, and she’s a strong character with enough flaws to keep her story interesting.”

I got into Strong Female Protagonist a little over a year ago. There’s something very real about Alison, about how she handles some very disquieting revelations about the nature of superheroes and how she tries to find a place for herself in the world that doesn’t involve tights. I also like that she has a deep love of the actual act of superheroism that’s at odds with her worries about the ethics of it. Alison really loves beating up bad guys.

Mulligan created a rich, believable cast of characters. Humans have mixed reactions to Alison’s attempts to live a normal life. There’s her government-mandated doctor who has grown into a friend, the friends who are a little thoughtless about her differences (it’s not cool to use your superfriends, Violet), and a host of resentful professors and annoyed bus drivers throughout. The Guardians who are still working (and wow do they not get Alison’s point of view) are a mixed bag, but my favorite non-Alison character is Patrick. I won’t say more about him because SPOILERS.

I love reading webcomics that update weekly (SFP updates twice a week) because you can watch the art evolve as the artist gets a feel for her characters. I think Molly Ostertag’s art for Strong Female Protagonist is one of its biggest assets. The line work has a dynamic feel to it, and I’m sort of in love with all the little pop culture references she works into the panels.

Book Two will be 320 pages of color content in a high-quality paperback format. Newcomers can read the comic here to catch up or pick the backer level that gives you both Book One and Book Two. Mulligan and Ostertag are using Top Shelf/IDW Publishing to publish and distribute, like they did for Book One, so this is a pretty low-risk project to back.

You can always wait for the book to hit standard bookshelves in 2018, but backers will be getting their books around the end of the year. Check out the Kickstarter for more details there. The campaign runs until May 26th and it’s already funded (almost triple funded with only word of mouth advertising, in case you’re wondering how good this is).

Of note: I neither got paid for this review nor got a free copy of this book. I’m just a fan. I did back it, though, so you can look for a review whenever my book gets in.