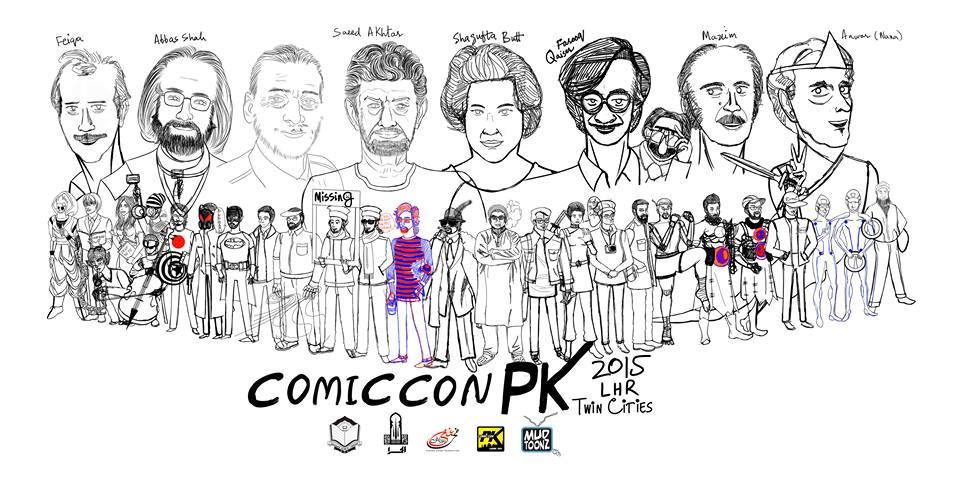 The moment I heard about a Comic Con happening in my city I immediately set out to contact anyone responsible for such an event. Comic book culture is rapidly growing in Pakistan especially due to the MCU and other superhero franchises. I got in contact with Mudassar Butt, one of the members of the team behind Comic Con PK, and talked about the inspiration behind the con and future plans. Check out our exclusive interview!

The first thing I noticed about Mr. Mudassar Butt was that he was quite open. He’s the brainchild behind the company MudToonz. He got the idea to setup the company back in 2008 when he went to renew his passport and noticed people talking about going abroad for better opportunities and jobs. He was working as a chief designer at a design firm in Lahore at that time. “It shocked and saddened me that almost 90% of people over there wanted to leave the country.”

Three years after that experience, he got the opportunity to teach graphic design and digital illustration at a vocational school. He was disappointed to see that most of the kids were learning skills sets in programming and graphic design to either study abroad or live there. In one of the orientation seminars he asked more than a hundred students, “What if I told you that 10-20 years from now like most of you are emigrating to foreign countries for a better job and education, foreigners start migrating in 10 folds from foreign countries to Pakistan because it became one of the central nexus for global trade, education, art and culture, etc.”

The response to his question was 88% of the students laughing, believing that he had just made a joke; however, 12 kids came to him after the seminar and asked him to explain further. One thing led to the next and he officially announced the formation of MudToonz comics and cartoons in January 2012.

While it’s a small company, he hopes that through the use of comics and cartoons, the company can show a “Lighter and whimsical side of Pakistan and Pakistani culture.” He believes that this is important because “Most foreigners consider us all fundamentalists and terrorists, even the ones in the womb.” He also believes that “Comic books and cartoons can break barriers of confusion and distrust between the East and West.”

Mudassar also illustrates the comic book KODA or Kings of Dangerous Actions, and he was generous enough to provide me a copy along with other awesome swag.

We also got to talk about the support he got from his family. His mother is an artist herself and illustrates the comic book The Accursed. While his mother supports his endeavors, she discouraged creating fan-art. “She always wants me to create something original and is not a fan of me drawing other superheroes and characters.”

Mudassar and his team set up the first Comic Con PK in December 2014 in Lahore and the turnout was something they weren’t expecting. “We only printed out a few hundred tickets but people came in the thousands. We had more than 2000 people attending the con. Kids would attend in the morning then go back and come again with more of their friends. The attendance kept growing in the two days the con lasted.”

There were booths for local artists to showcase their work to the public. They also held cosplay competitions at the con. 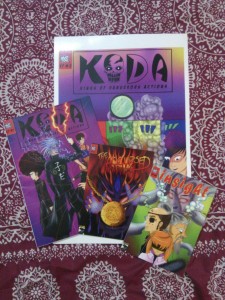 The team learned from their first experience and is ready from the second event they will be organizing in November this year. “We changed the month from December to November because it gets very cold that time of the month and isn’t something cosplayers look forward to.”

I was surprised to know about the ticket prices for the con. “We might price the tickets at fifty or even ten rupees because there’s no sense in looting people out of their money even before they enter the con premises. We want them to spend cash once they start attending the con rather than worry about pricey tickets and not having enough money to buy swag.”

For those of you who might now know, Pakistani 50 rupees is equal to just 0.50 US$ and rupees 10 is even less! Not a bad bargain especially compared to the ticket prices international cons have.

I also asked about his favorite comic book characters. “From DC I like Hawkgirl and Hawkman. I got to know about Hawkman when I was kid and played around with a toy figure that my cousin owned. From Marvel I like Wolverine because he’s immortal and no one really knows how old he is. He could possibly be the first ever mutant on Earth if Marvel decides to tap into some repressed memory of his. I also like Deadpool because he too has a healing factor, and is a fun character that breaks the fourth wall.”

Mudassar is currently busy making preparations for the con as well as for national artists who have shown interest in attending. “The response has been great! Everyone supports the cause and some have even decided to attend.”

Various international comic book artists and cosplayers have also shown interest and Mudassar is hopeful they will show up this year or even the next.

“My mother wants me to spread Comic Con PK like the plague. She wants to have Comic Con PK not just in Lahore but in other cities such as Karachi, Islamabad, Gujranwala, and more!”

“One of the basic reasons for having such a con is to support local projects and productions. I want to be able to compete with the international market with our own creations. The comic book and cartoon industry in the country is desaturated right now. There are a lot of things; some salt, some pepper, which can be added into it to develop it further. A lot can be achieved right now by artists with considerably less struggle compared to international markets.”

While organizing Comic Con PK is an impressive feat, Mudassar is also busy with projects of the scientific nature. He manages the day-to-day operations of an NGO/NPO called F.G.F (Fakhar Ghani Foundation) where he comes up with ideas, with his family and friends, regarding alternate energy projects: HHO Tech Energy, Solar Tech, 3D Printer Tech, and even the field of Bio technology when it comes to artificial limbs, etc.

Comic Con PK will be held from 20-22 of November 2015 at Alhamra Art Center, Lahore. I can’t wait to attend and meet up with other geeky people!

What are your thoughts about Comic Con PK? Which local cons do you enjoy? Let us know!