The Geekiary Takes On NaNoWriMo – Join Us! 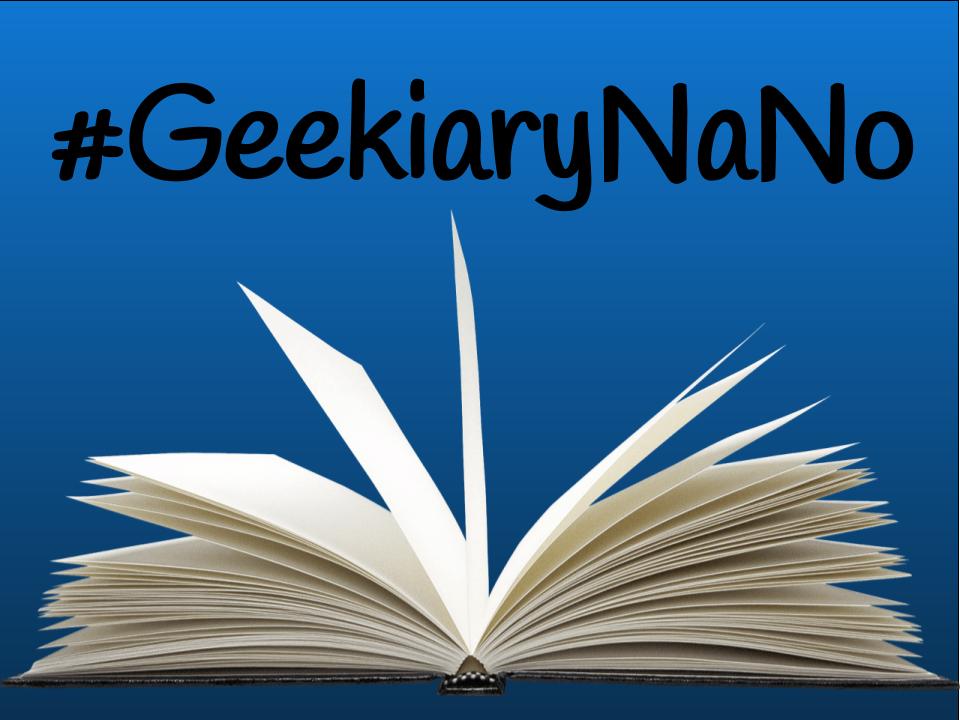 NaNoWriMo 2017 is upon us! Join us here at The Geekiary as we attempt to write novels in the month of November.

NaNoWriMo, also known as National Novel Writing Month, is an annual event that encourages people to write a full length novel in one month’s time.  This year, numerous Geekiary contributors are making the attempt.  You can follow our progress with the hashtag #GeekiaryNaNo and see our follow up post at the end of the month.  How far will we get? We don’t know, but we’re going to give it our best shot.

Will this be your first NaNoWriMo?

Khai: I’ve tried every year for an embarrassing number of years. The first time I was in Iraq and bored off my [redacted] during downtime. It turned out that I had less downtime than I thought. Every year I tried but kept having excuses. Finally, last year I made a new NaNo account for a fresh start. I joined the local meetups, put in the work, and reached 50K for the first time!

Tara: Nope! My first year was 2012. I haven’t won every year (not by any means) but I’ve at least attempted to every year since then.

Lucian: This will be my first year! I’m mega nervous as I usually have trouble sticking to such tight schedules.

What genre will you write in this year?

Angel: I’m going to do non-fiction essays about my life that could conceivably be a novel at some point.  There’s a lot of stuff I don’t think I could ever publish about myself, but there’s a lot that could fill a novel and others might find interesting.  I think the reason I gave up in 2015 was because fiction (besides fanfiction, anyway) just isn’t my genre.

Tara: I have no idea. I’ve thought about horror but I’ve already done that…I’ve thought about something similar to what Angel mentioned – in my case, combining experiences from some of my relationship experiences into one story – but I’m not sure if that would be too believable or completely unbelievable, haha. I might just end up using the month to finish my third novel, even though *technically* that goes against NaNo ‘rules’. (Or at least it used to…maybe that’s changed?)

Lucian: I am doing what I know best, short stories. I already planned to do a collection of short stories featuring LGBTQ+ characters with supernatural partners (ghosts, werewolves, sirens, witches, etc) and figured NaNoWriMo would give me the kick in the pants to do it. Hoping for around 8 – 10 stories but it all depends on their length!

Have you ever completed a novel before?

Angel: Never.  The best I did was a 70,000 word vampire AU Destiel fic.  Novel length, yes, but definitely not an actual novel.

Lucian: Never a novel. I have done short stories for my website, GenderTerror (“Click”), as well as having a story published in Werewolves Versus: Hollywood called “Seeing Stars”.

Why do you want to participate in NaNoWriMo?

Lucian: I write best under deadlines and forcing myself to get my butt in gear. If I have a clear window of what needs to get done and when, I work better. Always have.

Khai: Who doesn’t love a race you run with your brain?

Tara: Honestly, because it usually kicks my butt into gear with my writing the way few other things ever have.

Angel: I’ve been wanting to write these essays for about a decade.  Since my fiction writing attempts failed, I’m going to use this as motivation to get my non-fiction work finally completed.

Outside of NaNoWriMo, what type of writing do you usually do?

Khai: By day I’m a freelance content creator. By night I write for board games and comics. I’m working on one right now with an incredible writer (you’ll hear it here when I get the go ahead to share!).

Tara: In the real world I write social media content and press releases for a continuing medical education company; I also write reviews, news, and editorials for The Geekiary. Other than that I’ve written many, many different types of fiction throughout the years…in fact, even with NaNo I’ve tried a different genre every year!

Angel: I usually write articles for the Geekiary or slash fanfiction.  Significantly more of the former, of course.  But I still take pleasure in the latter.

Lucian: Short stories are always my thing. I prefer to write horror and have started working on something I am going to try to get published (and may work on along NaNoWriMo). Since I am what I call myself to be a ‘character writer’ I also tend to write romance and stories that focus on relationships. This may or may not (ok, it definitely) includes fanfiction.

Last question. Are you excited?

Angel: I’m determined.  I’m going to give it a go again and not let myself get overwhelmed again. I can’t run out of ideas if I’m drawing from real life, right?

Lucian: I am excited, and nervous, and terrified too. This is the biggest thing I’ve ever tried to do at once. I also may be car hunting and moving into a new apartment during November. That means I need to juggle moving, car shopping, work, AND trying to write at minimum 2,000 words a day.

Tara: I’m not excited, no. To be honest I’m not really sure how I feel, probably because this is the first year ever where I don’t already have at least an idea (and most years I had an outline, sometimes even research done, by this time). But at the same time, I’m ready in the sense that I know I need that annual NaNo kick in the butt and I’m hopeful that it will jumpstart my writer’s blocked brain.

Khai: I’m trepidatious. I know how much work it took to finish last time, and I’m girding my loins to keep my streak going.