The Road to Paradise Hills is Under Construction 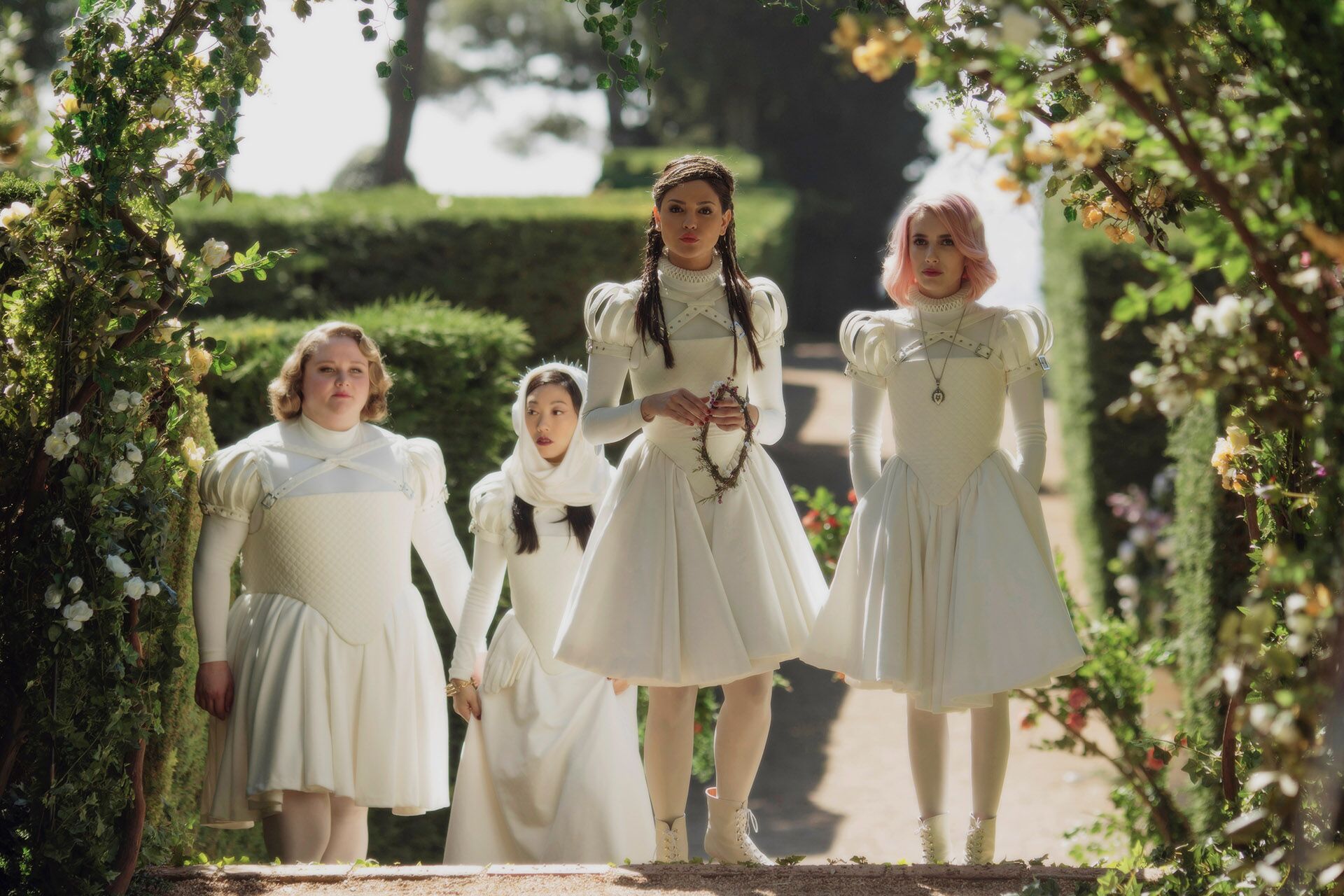 Director Alice Waddington takes you on a journey with her first feature, Paradise Hills. Though the message is clear, getting to your destination might be its own frustratingly beautiful journey.

Paradise Hills is a triumph of vision. Set on an idyllic island in the not so far future, our story begins at the wedding ceremony of our protagonist Uma (Emma Roberts). As soon as the relationship is about to be consummated (upstairs from the party no less), we’re thrust back in time (two months) to understand how we got to this indefinable place.

Uma is drugged and kidnapped, waking up in a sort of re-education center disguised as a sanitarium. Under the guiding eye of “The Duchess” (Milla Jovovich), Uma – along with her new friends Mexican popstar Amarna (Eiza Gonzalez), plus size southern belle Chloe (Danielle Macdonald) and anxiety-ridden Yu (Awkwafina) are all subjected to classes, therapy and diets meant to refine them into outstanding young ladies. To be perfect.

“I think the main message of the film is that social networks are telling us we’re never going to be perfect or popular enough.”

I had the opportunity to speak with the film’s director about the themes and messages she’d like the audience to experience while watching. 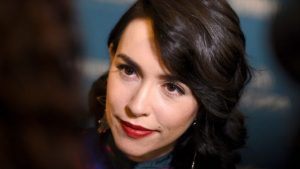 Waddington grew up in Vilar in the north of Spain. She was privileged to live in a household that valued cinema and cinematic discourse.

“My father had a film club when he was in uni and they would play banned films. Both my parents were cinephiles who enjoyed film from all over the world, but my mother was more into sci-fi so we loved the English classics as well.”

Waddington cites movies like Neverending Story and Lord of the Rings as the kind of high fantasy classics she was drawn to in her youth. Along with Spanish director influences like Luis Berlanga and Luis Bunuel, Waddington was surrounded by genres that enthralled her, though something was missing.

“I lived to escape to parallel worlds and finding new worlds and the genre narrative behind those films, but at the same time I could never fully see myself in those stories.”

Waddington was a young girl who’d encountered bullying while struggling to deal with her sexuality and gender politics.

“Making ‘Paradise Hills’ was a part of my invention of inserting myself and my friends into the narrative. The movie has influences of ‘Logan’s Run’ and ‘The Prisoner’ which are both hard male sci-fi references, that I didn’t want to feminize, but rather, to see it played out with a female protagonist. Offer a different perspective.” 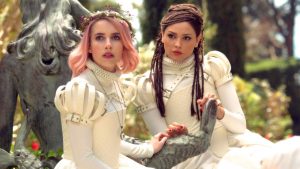 Visually, I think Waddington hit the mark. I mentioned the juxtaposition of modern technology with old-timey items such as the hover Rolls Royce kind of indicates a future nostalgia and she agreed that the references were meant to help tell the story.

“I believe the movie is happening in a world similar to ours, but maybe something happened differently historically, like a war was won or lost. The nostalgia in the film is sometimes seen as positive, such as the locket Uma carries that reminds her of her father, and other times it can hold us back in a certain sense.”

The idea of a finishing school or even sanitarium is something you’d think would be outdated in this world of immense technological advancement and obvious wealth, but it goes to show that no matter what era we think we’re living in, the base concepts of human interaction are always the same.

“When you have a ton of women in the story, some of them are going to be terrible people, and some wonderful. Yes, it is a film and I want people who watch to be entertained, but I also want teenagers who watch the film and see the way perfection is reflected. I want them to know they don’t need to change for other people and they should find someone who will love them for who they are.”

I mentioned the movie also displayed the sacrifices that can often occur trying to make unrealistic changes and Waddington agreed, using the character of Amarna and her journey as an example.

Overall it’s an inventively shot movie with keen attention to detail. And again, it’s gorgeous. I talked to Alice about the symmetry positioning in the film and she noted how much she appreciated Kubrick’s one-point perspective. Several of her shots are very symmetrical with the added twist of one item being slightly off-kilter. Just enough to cause unease and let you know that not everything is as it appears. It’s a device that’s effective and not overused in a movie where extra eats up the scenery. The opening wedding is a lavish affair featuring wild hairstyles and avant-garde make up.

The Duchess’s wardrobe is resplendent in gown and hair in swinging pin curls. Milla Jovovich was very excited to play a role in which she got to wear “pretty dresses.” The dresses act as a counterpoint to her cool demeanor and mysterious motives.

The film is full of easter eggs and nods to past horror and thriller classics like Nightmare on Elm Street and Labyrinth, and it’s a lot of fun to go through and pick out Waddington’s take and trope subversion. 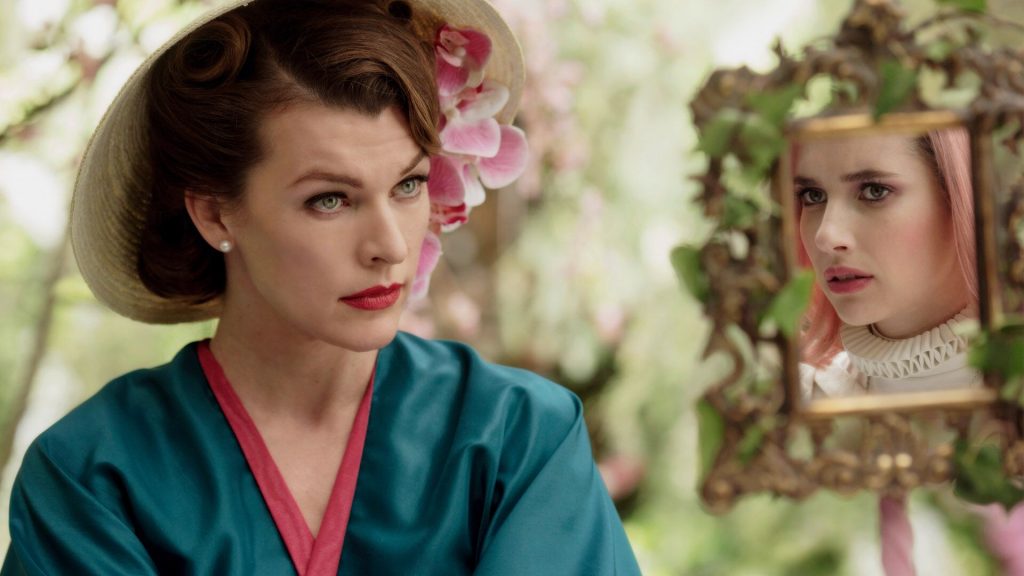 If there’s to be any criticism in the film, it’s perhaps due to a bloated script.

The road to Paradise Hills has a few too many potholes to make it a wholly satisfying venture. In a film where the scenery is so big, it’s always in the best interest of the filmmaker to scale back plotwise. There were about two or three side stories (including the male romantic interest) that had no bearing on the outcome of the film and just weren’t needed. And trying to navigate those plots took away from the main thrust of the story, to the point that when motivations are revealed and the curtain is pulled back, there’s not enough time to fully ingest the revelation.

It takes a lot of skill to elevate a script on a constrained budget and timeline, and I appreciate the inventiveness that went into getting the movie to screen. But when that skill doesn’t play in congress with the script and dialogue, you end up asking the audience to fill in a lot of holes without understanding the context.

For example, the wedding starts with a song where the wife is singing, promising her husband to “serve him on her knees” among other patriarchal tropes. We could infer that this was to show the patriarchy of the society Uma lives in, but then later in the movie, Amarna sings this song to Uma with whom she’s developed an unrequited infatuation. The song is sung during a karaoke night that shows the girls in some much-needed downtime. It’s instantly shut down but it’s hard to tell if it’s due to the nature of the song (is this a traditional wedding song?) or just to the overt way Amarna was singing it in the direction of her three friends (the camera shows her singing it directly to Uma, but there’s no way the guards should know that).

It’s a declaration of love given through a wildly misogynist and heteronormative song, and I was left confused about what the point of it was. What was the point of the boyfriend, or stealing two weeks of development from your audience by giving into a last-minute time jump? And several threads are never fully fleshed out. I would rather spend time on understanding the relationship between Amarna and Uma than about 75% of the story involving the center using Uma’s fond memories of her father to torture her. Ultimately it’s not something that holds any weight in the story.

For a light Sunday matinee, I may not immediately suggest this film. A “popcorn flick” type of showing only causes you to miss some of the nuanced story the direction alone tells. I think it’s best viewed under a watchful eye where you can enjoy the story told by its beautiful visuals and thematic inspirations. When viewed this way, I think it’s a film that has the potential to stay with you and enjoy it’s beauty far after the curtain has closed.

Paradise Hills was released on October 25th, 2019. Check your local theater for showtimes.

Previous:Are You There, Tyler Hoechlin? It’s Me, Empathy
Next: The Adventure Zone: Graduation Ep. 1 “Orientation”