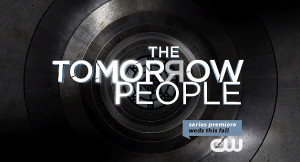 Last week on The Tomorrow People we learned about the inner workings of Ultra, met a new “paranormal” (the new name they coined because everyone hated the term “homo superior”), and found out that Stephen is really bad at teleporting (which I admit, I enjoyed immensely.) This week the focus is closer to home and it’s wrapped in a touchy subject: the separation between paranormals and humans.

Episode three highlights Cara in a big way, delving into her back stor

y and the events surrounding the activation of her powers. Needless to say it wasn’t kittens and rainbows. I would have been more than happy to have an entire episode just about Cara. As it was, her flashback scenes were almost too short and I found myself struggling to catch up with what was going on. It took me a couple of flashbacks just to catch the fact that Cara was deaf (which evidently she no longer is) but overall they served their purpose and gave good insight into her feelings about humans.

On the other side of things, Stephen is still playing double agent at Ultra though he’s acquired a new partner, an especially strong telepath named Darcy. She’s tough, kind of sinister, and I can’t wait to see more of her. She promises to be an interesting character along with Jedekiah (Stephen’s uncle and boss at Ultra in case you’re just tuning in) who remains as cheerfully menacing as ever.

The nice thing about The Tomorrow People is that it lets you see your villains up close and personal. It also shows you just how similar they are to the heroes. This is never more apparent than when Stephen blunders into the knowledge that one of his classmates may be planning to commit suicide. He asks for help from both the Tomorrow People and Jedekiah and he’s shocked to receive the same advice from both: do nothing. In fact, the only one who’s willing to help Stephen approach his classmate is his friend Astrid.

The request also causes some unexpected complications when Astrid accidentally witnesses Stephen teleporting. That one surprised me. I really thought the show was going to hold onto his secret a little longer but I look forward to seeing the effect this has on their friendship especially now that Stephen has begun to embrace his powers and his quest to find his father. Which will win? His human life or his paranormal one? Or maybe, just maybe, he’ll be able to balance both.

Three episodes in and The Tomorrow People has officially hooked me. It initially drew me in with its promise of teleportation and Mark Pellegrino and has kept me with the assurance of even more teleportation, interesting characters, and intrigue.