American Horror Story: Coven started out strong and has no intention of slowing down.

In the first two episodes of the season we got introduced to the rivalry between the Voodoo practitioners of New Orleans and the witches of Salem along with what the Voodoo Queen, Marie Laveau (Angela Bassett) did to the vicious Delphine LaLaurie (Kathy Bates).  We got to know a new teenage witch, Zoe Benson, who just discovered her powers and is admitted to a private school where three other young witches are protected by Cordelia Foxx (Sarah Paulson). 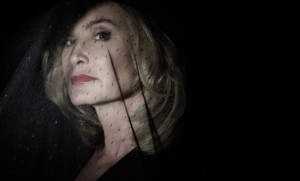 The balance is upset when Cordelia’s mother, Fiona Goode (Jessica Lange) shows up. She’s been having trouble accepting that she’s growing old and wants to put a stop to it. Long story short, she digs out LaLaurie who has been underground since the 1830s because of Laveau and she wants the potion of immortality.

Zoe and another witch, Madison, crash a party. Madison gets gang raped by a group of frat boys and ends up overturning their bus, killing them all…Yes, telekinetic powers do come in handy. She also kills the frat boy Kyle who was nice and tried to help Zoe and Madison. Zoe is distraught and the two witches piece him back, using his face and body parts of other boys who died, along with the help of a witch with necromancy powers, Misty Day. Misty also helps with Kyle’s…you know, Frankenstein scars and other stuff. Meanwhile, Laveau doesn’t want to help Fiona and they are at the brink of war. The voodoo Queen also sends out her Minotaur/lover after LaLaurie.

Phew! That was a lot to take in. Anyway, let’s get back to the current episode. We see Fiona feeling uneasy and gets up from bed at night, wandering towards a liquor cabinet. We get a flashback of when she was young and a student at the Secret Witch School. Young Fiona wants to be the next Supreme (the most powerful of witches) and she knows she is the one! She ends up standing against the Supreme of that time, Glinda who doesn’t want Fiona to take her place. Which, let’s face it, if you have been watching the series, is a good idea. Young Fiona doesn’t have any of it and slashes Glinda’s throat. She is witnessed by the caretaker, Spalding and they agree to share the secret and we come back to the present time.

We get another flashback of young Fiona being able to seduce every man in the bar but now she has gotten old and is growing weaker everyday, so that has stopped happening. The scene then changes to Zoe talking to Kyle’s mother. The conversation they have has a lot of red flags!

Back at the The Little Witch School, the other three young witches, Madison, Nan and Queenie, are ogling at some boys who are moving stuff into the house next door. One of them takes his shirt off and the scene, accompanied by the slow and sweet ‘La La La’ soundtrack of the series, makes you think you are watching some kind of commercial for a summertime drink. Well, the drink does come but it’s the boy’s very religious mother, and she doesn’t like the girls looking at her innocent boy. Even the Heavens could hear Madison vowing to get her hands on the boy candy and now!

We see LaLaurie still trying to understand what’s wrong with the current world. Seeing Obama as the President of the U.S. doesn’t sit well with her.  Then she’s forced to become a maid by Fiona. Watching what LaLaurie did to the black community in her days, I enjoyed watching this scene. At breakfast LaLaurie refuses to serve Queenie and they have an amazing scene which also includes Fiona. You can see the despair and anger in LaLaurie’s face and it feels so good! 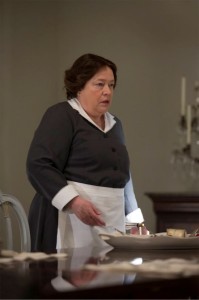 Misty has healed Kyle and Zoe comes to take him back to his mother. Misty isn’t pleased and she starts spinning when they leave. I am so sure she just cast a spell or something. Nan and Madison go to meet their new neighbor, Luke, and Nan baked his favorite cake…you go girl! Luke has a connection with Nan and completely ignores Madison. Before the girls could flirt any longer, his mother intervenes, tells him to go to church. Madison bad mouths Christianity, they fight, and Madison sends a knife flying across the room. She even sets a part of the house on fire… #AngryHornyWitch

Cordelia goes to the doctor for fertility treatment. Nothing has worked. Not even the creepy love making she had with her husband with snakes hatching around them last episode. The doctor tells him she just can’t have a baby. Fiona is also at her doctor talking about a face lift but she can’t because her immune system is failing her.

Zoe drops Frankenstein Kyle at his mother’s. The woman takes her in but not before we get a closeup of him looking in back at Zoe in fear. Yes, we all know things are going to get crazy. Fiona gets a visit from Luke’s mother. The Supreme doesn’t listen to her until she gets to know that one of the girls set her house on fire. To see if her suspicion is true she asks Madison to light her cigarette and she does with sheer willpower.

Kyle’s mother molests him…Yes, people, that just happened! Think happy thoughts, think happy thoughts. Who knew the person behind Glee could write something like that, too. Cordelia visits Laveau because she knows of a fertility ritual, Laveau refuses but not before we are shown how the ritual works…talk about intense!

Fiona takes Madison to lunch and then gets her drunk at a bar. You can tell it isn’t going to end well. At school it’s night time and the Minotaur arrives for LaLaurie. She begs Queenie to save her and the witch makes a cut on her hand and collects the blood on a dishtowel. She then goes outside and lures the Minotaur towards her and asks him (it?) to love her. My whole body shivered during the scene and not in a good way! 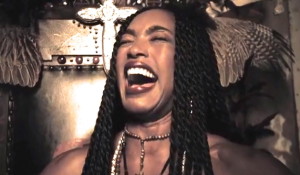 Meanwhile Kyle gets fed up with the incest thing and runs away from home. But not before taking revenge on his mother. Back at the school Fiona, pretending to be drunk, and Madison, clearly drunk, have a conversation about being a Supreme and how she’s the chosen one and Fiona is dying. The episode ends with one of the best scenes of the season, which I don’t want to spoil for any of you. Kudos to Emma Roberts (Madison) for standing up against two-time Oscar winner Jessica Lange (Fiona).

Episode three gave us a look into Fiona’s past and some interesting experiences for other characters. Questions did arise from this episode and I’m pretty sure they will be answered as the season continues. We have to keep in mind that we are watching American Horror Story: Coven and there’s definitely room for more surprises and twists!