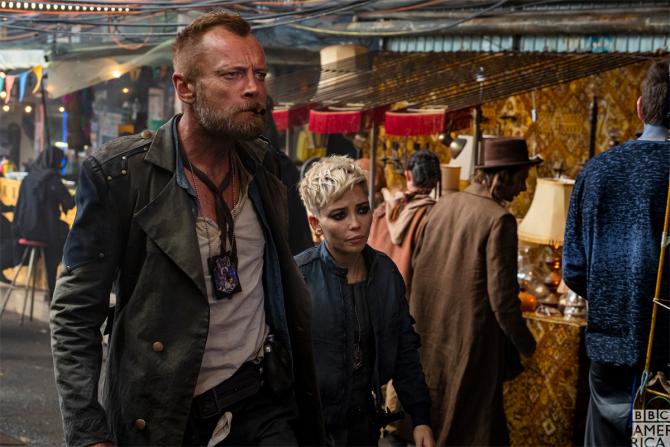 “Who watches the Watch?” It’s a question Havelock Vetinari asks of Sam Vimes in the City Watch series by Terry Pratchett, and with the books currently being adapted for the small screen by BBC America, it’s a question that’s soon to be answered with viewing figures. The Watch is slated to air in 2020, and future Watch-watchers have been tantalized by the announcement of an unexpected main cast, and some controversial photos from the set.

For those familiar with the original Terry Pratchett series, casting choices and photos from the set of upcoming show The Watch are raising questions.

It’s safe to say the pictures are not generally popular. The world they present is very different to what many fans were expecting, and an outpouring of doubt has been trending on Twitter in the UK. For a lot of people, it’s brought into question whether Sir Terry Pratchett’s works are being treated with respect in the transition from page to screen.

Production stills, like first draft of a book, look very different from the finished product. If nothing else, what we see in the pictures likely hasn’t been through the same color-grading process that we’ll see in the show itself, so we need to shelve any questions about the tone they set through the sheer superficial look of them until we see a trailer.

Even so, there are some obvious differences to the Ankh-Morpork we know and smell: we can see a couple of desk fans and what looks like a kettle, for instance, in the background of one of the pictures, and an electric light in another.

Definitely worth an eyebrow-raise, considering the apparent addition of electricity to the world of The Watch. (A brisk shiver at the idea of the books’ Corporal Nobby Nobbs anywhere near a power outlet. You have to wonder what his interesting scent would adapt into when lightly fried. Or would he rust the metal inside the plug to the point of breaking it, before the electrics had the chance to cook him? Unstoppable force meets immovable object, perhaps.)

For fans who are comfortable with the idea of a transformative work, the possibility of these changes isn’t completely daunting. An adaption doesn’t have to be completely faithful to be good, and deviating from Pratchett’s choices was always going to be necessary when moving from book to television. Pratchett’s works aren’t perfect, by his own admission.

And all of this is said through gritted teeth, while thinking wistfully of what it would be like to see an adaption that truly captures the tone, characters, and world of Terry Pratchett’s creation.

As far as casting goes, it’s Anna Chancellor in the role of Vetinari, the Patrician of fictional city Ankh-Morpork, who has so far been the subject of the most intense debate. Vetinari was a man in the Pratchett books, and it seems as though this will not be the case in the show itself. There have been the inevitable voices calling for an end to “PC culture”, which merit an eye-roll, and maybe even a yawn.

To politicize the existence of a type of person inside one’s own mind, and then to cry “too political” at anyone who casts, or caters to, or even actually is that type of person, is something worthy of Pratchett’s ever-sharp satire. Vetinari’s gender in the books is as relevant to his story as his hair color or the shoe he puts on first, but for some it’s still a detail too crucial to change.

Aside from these predictable responses, though, there are also plenty of people excited to see Anna Chancellor in the role. It’s thrown expectations in a way that the Vetinari of the books would have found a way to make use of, and we can only hope the creators of the show will be as canny.

The actress cast as Lady Sybil Ramkin, vividly described by Pratchett as capable of having “carried off a battalion”, is also being discussed. Her physique’s exact specifications are left mostly to the reader’s imagination in the books, but we are made absolutely aware that Sybil Ramkin is a big woman.

Fans of the series were speculatively throwing around names: Miranda Hart, Gwendolyn Christie – even American tennis player Serena Williams, though she has yet to show an interest in acting. (Her continuing triumph in the face of racism in tennis, though, ignites a sudden wild hope that she might turn her attention to getting an Oscar.)

The casting of Lara Rossi as Sybil took many readers by surprise. Fans hoping to see a tall, fat book character represented as a tall, fat character on the screen are destined to be disappointed. One commenter remarked, “Sybil as a gorgeous young slim woman instead of the older, viking warrior build really rankles […] still can’t bear the idea of larger, older women having a love life eh?”

Among fans there has also been plenty of appreciation, however, for the casting of an actor of color in the role.

Sybil’s character seems to have been significantly altered: she’s described as a “chaotic” vigilante in the most recent information we have about the show, and while she was of Valkyrian build in the books, in her day-to-day she tended more toward the traditionally aristocratic than the pugilistic. She lived in a big house, and cared mostly about the breeding of her livestock (admittedly, dragons are less traditional, but still).

The show’s plan for Sybil might allow for some fun moments of chemistry and frustration as her vigilantism clashes with Sam Vimes’ more steadfast and plodding Watch – that would be a rather flashier romance than their understated union in the books, which was quietly underpinned by heartfelt emotion, rarely mentioned.

Further fan discussion surrounds the casting of Jo Eaton-Kent, a non-binary actor, in the role of Constable Cheery. In the books, Cheery Littlebottom struggles to express herself and be seen as the female dwarf she is, rather than the male dwarf that people assume her to be. She tries lipstick and skirts for the first time, considers changing her name, welds metal heels onto her boots, and inspires other female dwarves to follow her lead – but draws the line at shaving off her beard. Fans of her story have seen many parallels with the trans woman experience: her story is, at its heart, one of finding her womanhood in a world that insists she must not.

With The Watch unaired, the exact intentions for Cheery are uncertain; in the most recent information officially released about the show, though, the character is confirmed as non-binary. At first glance this is an exciting choice, given how few representations of non-binary narratives we find on the screen. The adaption of another Pratchett work, this one in collaboration with Neil Gaiman, brought us one of those rare instances of representation.

As rare and interesting as these questions are, there’s an argument to be made here that gender-related issues are not interchangeable, and it shows disbelief in Cheery’s hard-won expression of womanhood in the books to shift her to being a non-binary character in the show. Unlike Vetinari, Cheery’s gender identity was a focal part of her story, and so the gender shift has to be viewed under a different critical lens.

Perhaps we can settle on the fact that both the Cheery of the books and the Cheery of the show will be characters who challenge the mainstream understanding of gender, and bring representation where it’s badly needed.

When adapting stories as beloved as Terry Pratchett’s, there will always be dissent over every choice. Discussion over the production stills is to be expected. The concern over the three actors that have been mentioned, however, leans less toward typical fannish grumbling and more toward larger questions of representation and diversity.

Does the casting of an actor of color in the role of Sybil offset the apparent removal of her identity as a big woman? Does it more than offset it? Is the industry as a whole to blame for the fact that a search for an established big British woman actor of color would not be a simple one?

Can Cheery’s transition and woman-focused story be respectfully changed to a non-binary narrative? Should every possible chance to write that narrative and cast a non-binary actor be taken, given how few parts they’re allowed to read for?

And was Scarlett Johansson just not available for any of these roles?

In a series of novels where questions of identity and diversity are integral, it’s unsurprising that fans are openly addressing these issues. Like Ankh-Morpork itself, the fanbase is a rowdy hodge-podge of all sorts, some of whom probably sell questionable sausages, all of whom have an opinion.

Perhaps The Watch will be an adaption that we can only love by briefly developing a very specific collective amnesia about the source material, and letting the show make its own impression. Perhaps it will be terrible, but in a fun way. Perhaps it will be simply terrible. There’s a chance it might be properly good.

We can hope that the creators of the show love the gloriousness that is the works of Terry Pratchett enough that the show is saturated with it, and we can hope that it will be genuine and exciting, rather than a cash-grab. In the meantime, above all else, we can always comfort ourselves with one thing: at least this British cultural gem is not being adapted by Steven Moffat.

We have to celebrate the little things.