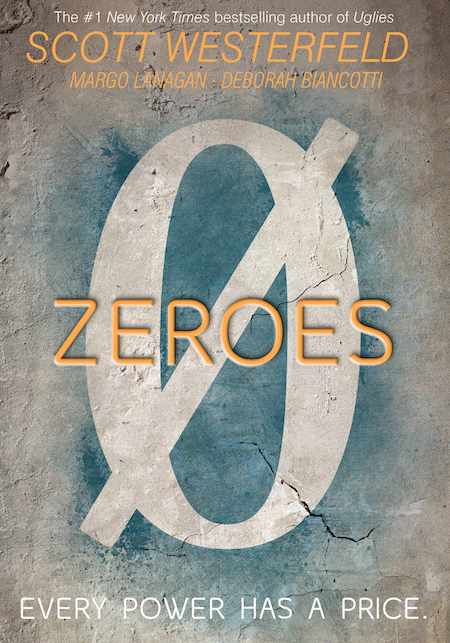 Every power has a price. So says the cover of Zeroes, the combined effort of authors Scott Westerfeld, Margo Lanagan, and Deborah Biancotti. Zeroes tells the story of a group of six teenagers with special powers – but don’t call them heroes, because they’re not. Their powers are slightly unorthodox (you won’t find anyone who can fly or who has super strength), and it’s not like they’ve consciously banded together to fight crime. In fact, they’re not even friends – not anymore, not after what Ethan said to them last summer. But then Ethan’s power predictably gets him into trouble, and he has no one else to call to get him out of it. Soon, they’re in way over their heads, having accidentally stumbled into a bank robbery and somehow gotten afoul of the mob, and it will take all their combined efforts to survive.

Zeroes has a great premise, and not only that, it has the execution to follow through on its premise. A lot of times a book will sound interesting but will fall flat in its delivery, leaving you disappointed without really knowing why. There are dozens of superhero stories out there, and the premise tends to wear a little thin. The great thing about Zeroes is that it’s not your typical superhero story. This isn’t some coming-of-age tale about teen heroes coming into their own and mastering their powers to fight for the greater good. This is a novel about teenagers grappling with the drawbacks of having attributes that are difficult and sometimes impossible to control. Some of them don’t even want their powers – like Ethan, whose mouth literally has a mind of its own, or Thibault, who gives whole new meaning to the word “invisible”.

By giving these characters abnormal abilities, the authors have created an interesting and complex new world; they turn the whole idea of superheroes on its head. Zeroes does what a lot of superhero stories don’t by focusing on the problems rather than the benefits, but it is ultimately the characters who make Zeroes so compelling. A diverse cast of characters who are flawed and multi-layered, with various and complicated interpersonal relationships. All of them are still dealing with the fallout of what happened the previous summer and trying to find their way back to being friends. Not all of them are well-developed, which made it difficult to connect with them, but the fact that friendship is emphasized more than romantic relationships is something I really enjoyed. Not to say that there isn’t romance, it just isn’t important in the grand scheme of things.

While well-written and engaging with a sufficiently nerve-wracking climax (I do so enjoy when you honestly don’t know whether or not a character is going to live or die – plot armor is so overrated), it does suffer a bit from pacing problems. It is, after all, 560 pages long; though to be honest, I was so engrossed in the story that it didn’t feel that long to me at all. This is one of those “almost made me miss my subway stop” books, because I didn’t want to stop reading to get off the train.

In short, Zeroes is not without its problems, but I think that the story is intriguing enough – and the characters interesting enough – to forgive some of the more minor pitfalls in favor of the overall package. If you’re interested in seeing a different take on the fast-becoming over-saturated market of superheroes, I highly recommend you check out Zeroes. Or if you just want to read a really good story.

Zeroes by Scott Westerfeld, Margo Lanagan, and Deborah Biancotti is published by Simon Pulse and is currently available wherever books are sold.