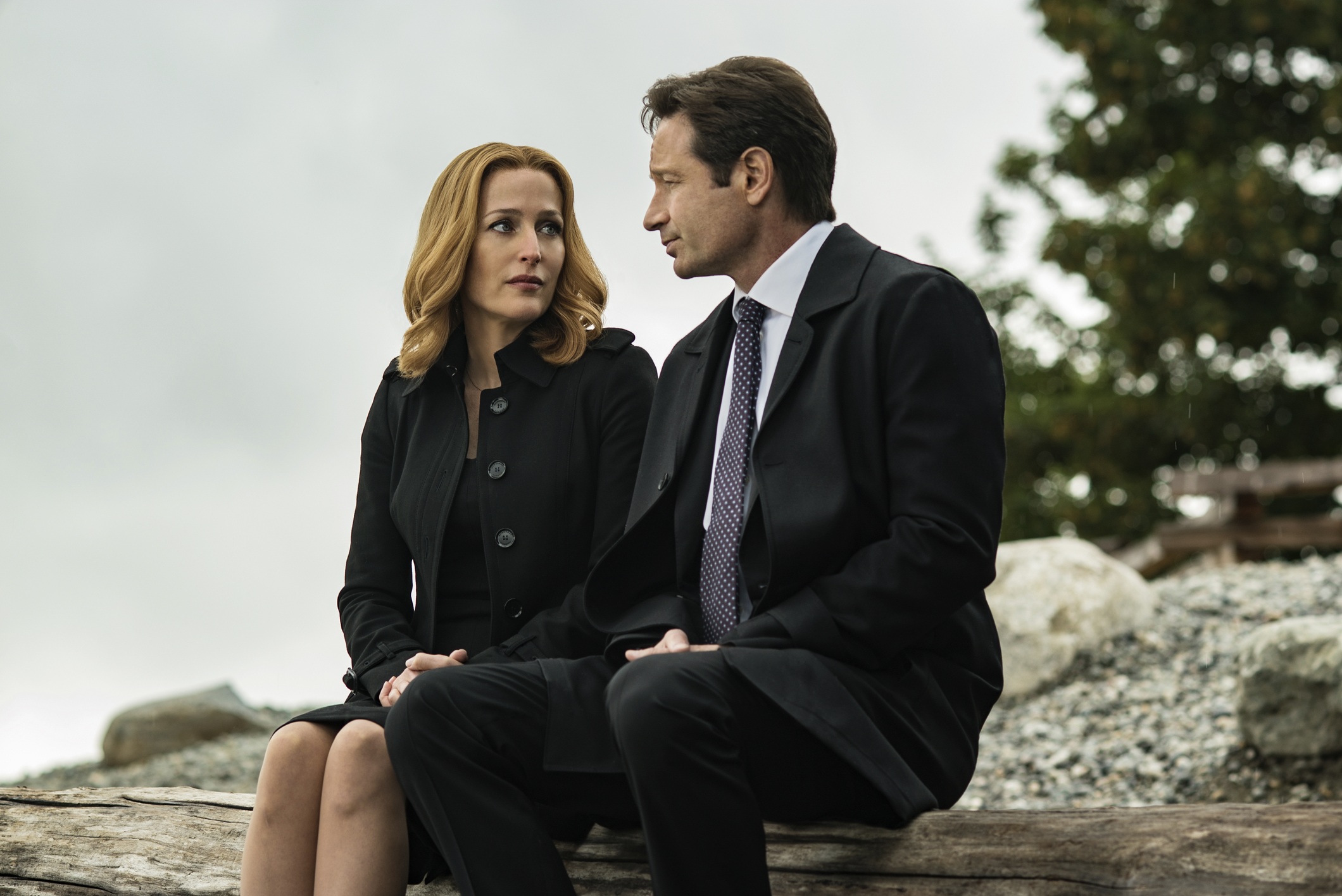 I suppose I’m just going to have to get used to the abrupt changes in tone during this shortened season of The X-Files, because “Home Again” was certainly very different from the first three episodes this season.

“Home Again” opened with a cameo by none other than Alessandro Juliani, who I’ve recently enjoyed on The 100 and immediately had BSG actor feelings about when I saw him appear in this episode of The X-Files. Unfortunately, his character Cutler didn’t last past the first scene, which showed him trying to clear homeless people out of an area of Philadelphia only to be brutally murdered (literally torn apart) by what appeared to be a very large walking corpse. That seemed to be living in a garbage truck.

Yeah, this episode was weird. 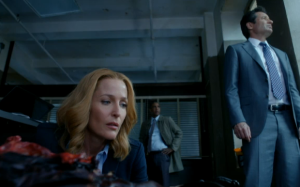 Mulder and Scully showed up, but almost right away Scully received a call (or rather, many calls) from her brother, who was trying to reach her to tell her their mother had had a heart attack. At first I had a bad feeling when Mulder told her to go back to DC – not because she shouldn’t have, of course she needed to, but because a lot of bad things have happened to the two of them whenever they’ve parted ways. Thankfully this time that didn’t really come to fruition, at least not in any way I was concerned about.

I will admit that I thought the whole mystery-solving portion of “Home Again” was a bit awkward. At first it seemed that Mulder was figuring things out almost too fast – the security cameras were knocked out, so the guy had to be tall, but one of them showed a blank billboard across the street that, on the morning after Cutler’s murder, had a giant creepy-looking man painted on it. On top of that Mulder even picked up a gross-looking band-aid on the bottom of his shoe while he was at the crime scene and of course had it analyzed…but then it seemed like he was back at square one when the band-aid turned out to be “clean” (or at least, somehow contained no organic or inorganic material).

I did really like the scene between Mulder, Nancy, and Landry, where Nancy was fighting against moving the homeless to the old hospital because they’d be too close to a school, while Landry was arguing that they’d be better off there than in the streets, though he was of course doing it so he could build his apartment building. But Mulder immediately called it like it was – they were both claiming to speak for the homeless when really they were speaking for themselves, and when he asked who actually spoke for the homeless, a man replied, “Band-aid nose man”. The thing is, wouldn’t we know if “Band-aid nose man” had been tearing people apart all over Philadelphia prior to this incident? How did they already know this “man” was speaking for them?

Of course, not long after that we also saw the creepy giant man-thing take out two art dealers who were, err, confiscating the homeless’ art. This time he climbed out of the portion of the billboard they’d absconded with, which definitely left me more than a little bit confused.

Back in DC, Scully dealt with finding out that her mother had changed her living will and didn’t want to be kept alive with life support, despite having told Scully the opposite many years before after Scully herself was in a coma. Other than that, we only know that her mother asked for her estranged son Charlie before losing consciousness…and that Mulder showed up just in time to be there for Scully. (Big “awww” moment for this fan, though of course the sad situation tampered that a bit.)

In the end, Charlie did call, and though he didn’t exactly say anything nice, hearing his voice woke Momma Scully up for a moment – long enough for her to take Mulder’s hand and tell him “My son is named William, too” before passing away. Of course Scully’s reaction was heartbreaking; Gillian Anderson really showed her acting chops in “Home Again”. Perhaps her breakdown over the fact that those were her mother’s last words, her confusion about the quarter her mother had framed and wore as a necklace, and then her sudden insistence on returning to Philadelphia because she needed to work right then was all a bit rushed, but considering the one-episode time constraint I think Gillian and the writers handled it pretty darn well. 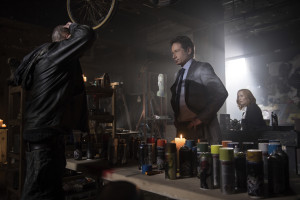 Not that creepy not really alive man-thing (okay fine I’ll call him Band-aid nose man from now on) took a break while Mulder was away. He took care of Nancy before the agents could get back to Philadelphia, and this time he arrived via garbage truck again. Between that and what Mulder and Scully learned when they found and chased down the artist who “created” him, I’m still not sure how I feel about the villain aspect of “Home Again”. Band-aid man was sculpted by Trash Man, who then willed him to life through meditation and planted violent thoughts/ideas in him by mistake, all because he was upset over the homeless being treated like trash? I mean, I get being upset over that, but using that anger to will a giant sculpture of a man to life and then practically urge it to rip apart anyone harming the homeless is a bit much.

Of course, there have been a lot of strange X-Files episodes in the past, but this one is definitely up there with the best (or worst?) of them.

To top if off, the end of the episode felt a bit rushed. We finally got to see the homeless moving into the hospital, and I found myself even more pissed at Landry when I found out that he’d taken their dogs to the shelter on them, because yeah, separating people from their animals is totally going to make them want to stay in your spooky abandoned hospital. Still, I kind of assumed that Mulder, Scully, and Trash Man would arrive in time to save Landry…only they didn’t. Not only that, they didn’t see where Band-aid man went, despite being just seconds too late to save Landry.

Next thing we know, Trash Man is skipping town and leaving his Band-aid man sculpture behind, but not before giving it a new head – a big round one sporting the original smiley face. My guess is this is one of those X-Files we’ll never hear about again, but then, who knows what could happen now, I suppose.

“Home Again” wrapped up with a touching scene between Mulder and Scully, during which Scully promised to be by his side while he solved his mysteries but lamented that hers would likely never be solved. Despite their previous conversation about giving their son William up for his own good, his name popped up on her phone every time someone else called her in this episode, and of course her mother’s last words took their own toll. Still, I think Scully’s worry that they treated William like trash is a bit much; it felt like the writers were just forcing this conversation to come back around to the theme of this episode.

Yes, to me, “Home Again” was one of those maddening X-Files episodes that I’d almost let myself forget existed (thanks, nostalgia), but I’m still excited to see what happens next…and to see whether or not they can wrap up an overall story in just two more episodes. 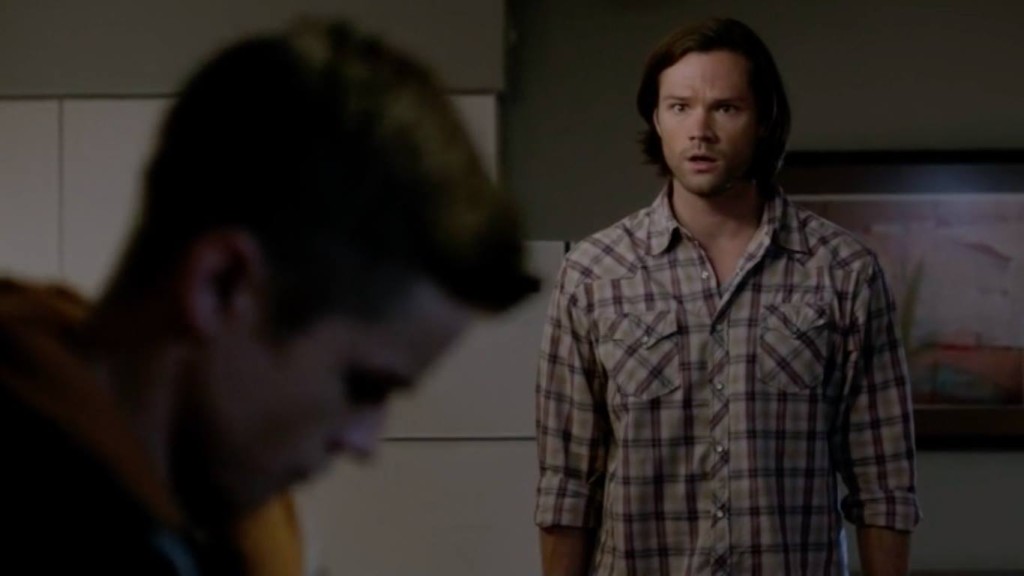 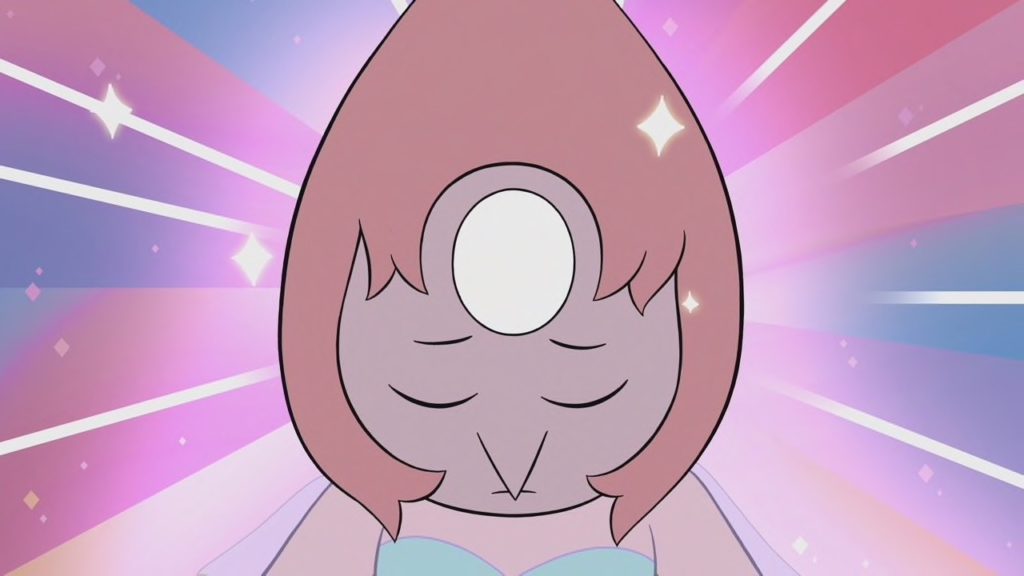 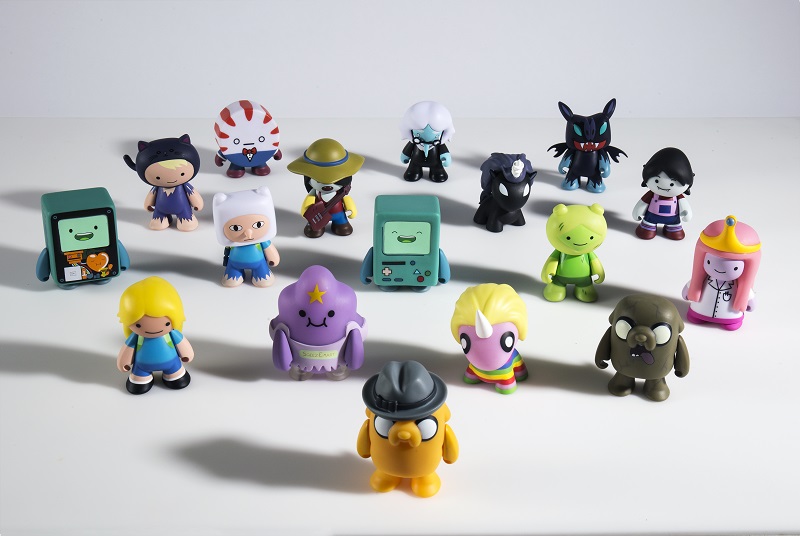