Adult Swim Drive In a Delightful Night of Laughs and Lines 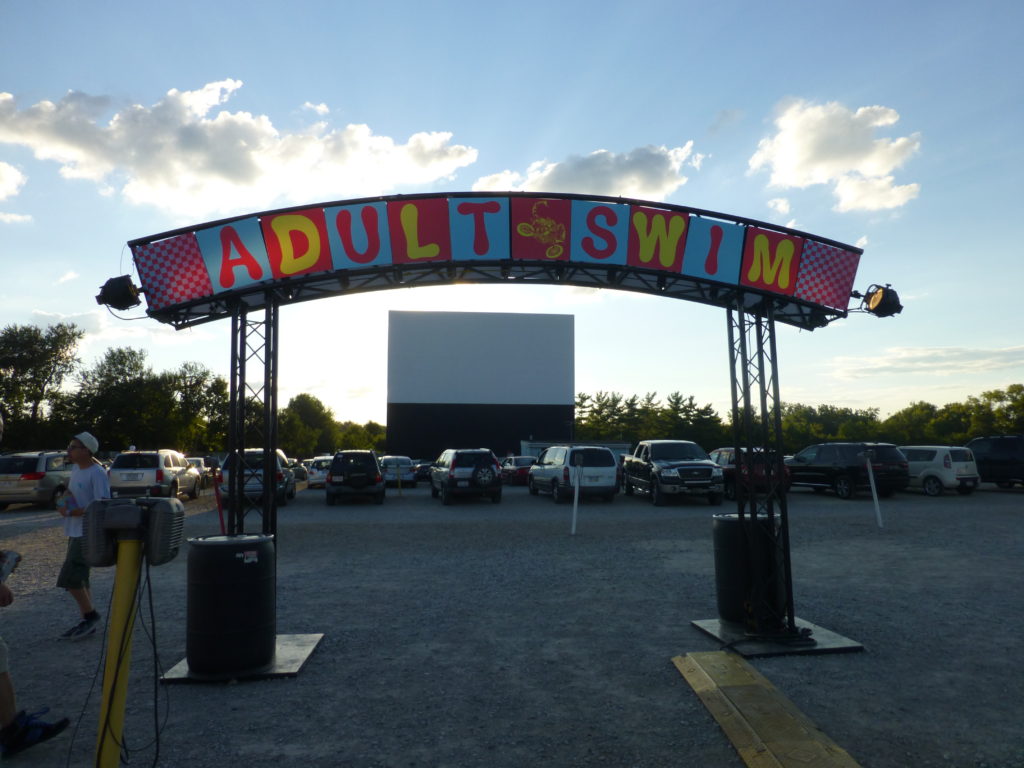 Last night I attended the Adult Swim Drive In event at the South Drive-in Theater in Columbus, Ohio. We were treated to a free event with food, fun, and a screening of exclusive Adult Swim content. 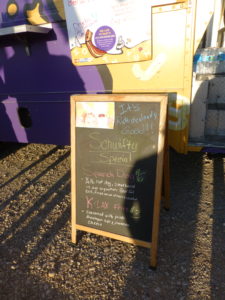 We waited in a long line of cars and were slowly directed through the drive-in and told where to park. Cheerful volunteers clad in pink shirts and baseball hats checked our RSVPs and doled out wrist bands and free food vouchers. You could either drive and park and watch the clips traditionally from your car, or bring your own chairs and blankets and watch from the lawn instead. If Adult Swim Drive In is coming to your city, I would suggest the former, as we were allowed in first, and got access to the food trucks and other activities provided by Adult Swim well before the rest of the crowds.

There were some small organizational hiccups in terms of directing crowds and cars, but considering that each location where this event takes place is a different drive-in with a different setup, I was quite impressed with how they handled everyone.

I was less impressed by the lines that formed once the cars were settled and they started allowing folks in on foot. There were only four food trucks and one of them was an ice cream truck — for people who got there later, they waited in line for hours to get fed. The lines were still very long when the show started, and it didn’t help folks’ patience that they had to first wait in a line of cars before waiting in a line for food. 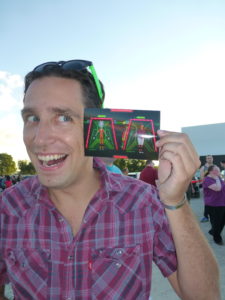 Spent some time in space jail

Still, the event allowed bringing your own snacks, as long as they remained in non-glass containers and didn’t contain alcohol. They also didn’t allow drugs or cigarettes, but that didn’t prevent an array of different kinds of smoke from wafting throughout the grounds during the event. I guess when you offer a group of young people a free event, some rules are bound to be broken.

The Adult Swim Drive In was 18+ and I would guess the average age of attendees at early- to mid-20s. We were a very diverse bunch of nerds, mingling, complimenting each other’s awesome cartoony apparel, appreciating the work Adult Swim put into this event. While I am fairly confident they are using the Drive Ins to gather information from their target demographic like email addresses and phone numbers, it’s hard to be disgruntled when the event itself was free.

At check-in they doled out posters and wristbands. Once inside, besides getting food, you could pose alongside Rick in space jail, play cornhole, or get treated to free candy and popcorn. As the sunlight dwindled we played a few rounds of trivia, texting answers as they appeared on the big screen. Winners got prizes, but no one in my group won anything, so I’m not sure what they were.

Finally it was time for the screenings themselves. I was hoping for something like a sneak peek into the upcoming Samurai Jack miniseries or maybe even some exclusive Rick and Morty content, but they were mostly testing newer stuff.