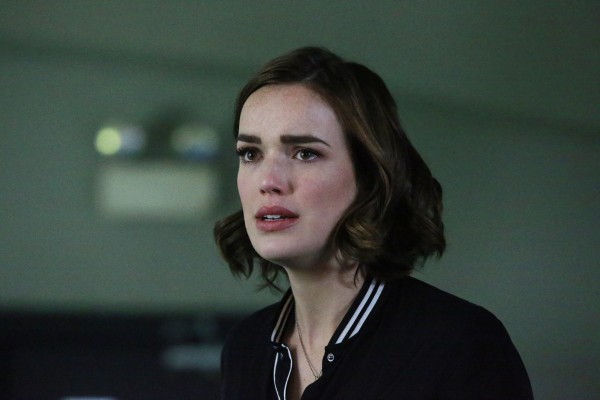 Agents of S.H.I.E.L.D.’s two part finale, “S.O.S”, was epically awesome and at the same time hugely unsatisfying. There were parts that showcased just how far this show has come, and how much better it has gotten, but many of the emotional climaxes just didn’t pay off. But I’m getting ahead of myself, because overall “S.O.S” was a romping good time that tore my heart in all the right places. The action sequences continue to be great, and Evil!Ward is just the gift that keeps on giving. 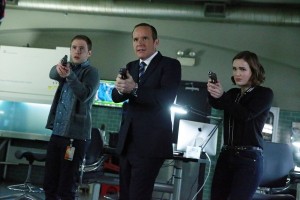 This week on Agents of S.H.I.E.L.D., Jiaying manages to start a war even though everyone except the InHumans has figured out she’s the instigator. Doesn’t really matter who started it, because the InHumans attack the S.H.I.E.L.D. ship while Cal goes full Hyde back at base. Also Raina dies, Skye figures out her mom’s true nature and Mack is actually James Bond. Meanwhile Ward is still beautifully bonkers as he helps Kara find closure by torturing Bobbi. In the end Cal kills Jiaying, S.H.I.E.L.D. wins, Ward kick starts Hydra, and Simmons gets swallowed by a mysterious Kree weapon.

Lots of stuff happened – like so much stuff happened – but really the core of this show still comes down to the six main characters (I know Lance and Bobbi are in there now, but their storyline is basically a season long set up for a spin-off that isn’t happening). All the stuff that happens only matters because it affects Coulson, May, Ward, Skye, Fitz, and Simmons – the original team. In order to understand what these episodes – and this season over all – gets right and what it gets wrong, we need to look at how it affected the core six.

Coulson’s storyline this season is particularly interesting because he went from being the main protagonist in Season 1 to a secondary character whose narrative is almost entirely linked to another character’s journey. In this case it was Skye’s search for family. Coulson is set up as a surrogate father and presented in direct opposition to Cal. Almost everything Coulson did this season was paralleled by Cal in some way. These intertwining paths came to a head in “S.O.S.” as Cal and Coulson are forced to work together to save Skye. 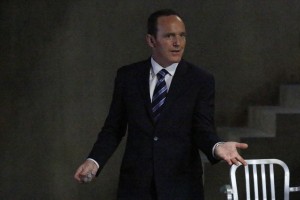 Generally I’ve enjoyed the way Coulson and Cal’s storylines complimented each other and informed Skye’s inner conflict, but I wasn’t particularly satisfied with the conclusion. The main issue was that in the end Coulson and Cal’s story seemed to be less about how they impacted Skye and more about how Skye impacted them. The two men spend much of the episode discussing Skye, as they have done for much of the season, but neither of them seem particularly interested in talking to Skye. Despite the fact that much of this season has been Skye’s story, it’s Cal and Coulson’s actions that ultimately save the day and that’s a little disappointing.

May, like Coulson, is used as a surrogate parent for Skye – an alternative to Jiaying – but her role as surrogate mother is more personal as shown through the Cavalry flashback. May and Skye’s storylines reached their climax when they fought at Afterlife and I loved it, because their issues are not yet fully resolved, and it’s one of the few things that isn’t tied up in a neat bow at the episode’s close.

May’s other significant character arc was less about motherhood and more about identity. Kara is wearing her face and she’s making the same mistake May did by trusting Ward. The conclusion of May and Kara’s storyline works because it’s the fact that she’s wearing May’s face that ultimately kills Kara. It’s got symmetry and that’s always somewhat satisfying. At the same time, they just killed a WOC to give Ward more angst. As much as I love Evil!Ward I’m not so keen on the implications of that decision.

Ward was great this season, but his actual storyline was a bit of mess. Sure, part of what was so delightful about watching Ward was that his actions didn’t really make any sense. At the same time it would have been nice to see his personal journey intersect with the wider season narrative. Because Ward’s story is completely separate from the InHumans story, every time the episode turned to focus on him it interrupted the narrative flow. It was also kind of annoying because it took May away from the main action and she really should have been a part of the epic InHumans vs. S.H.I.E.L.D. battle.

I love Ward and I love every time he’s in an episode, because I know that whatever happens it’s going to be entertaining as hell. I also really loved the weird twisted relationship between Ward and Kara despite the fact that it didn’t make any sense. But it didn’t connect to the wider narrative at all. It was like watching a completely separate show, and in the finale it was worse, because not only was it the bonkers Ward show, but it was also trying to set up the Bobbi and Hunter show, which I just don’t care about at all. So yeah, Ward is a great character; they just really need to figure out how to fit him into the actual story. 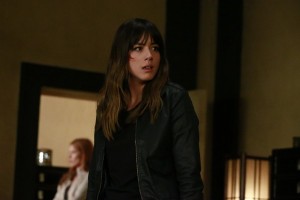 Skye’s storyline on the other hand continues to be THE BEST and most consistent thing Agents of S.H.I.E.L.D. has ever done. Her storyline comes full circle in the finale as she first choses to side with the InHumans before witnessing Raina’s death makes her switch sides. It’s so perfect that it’s Raina that ultimately convinces her of her mother’s true nature because everything that has happened between them has led to this point. I’m sorry to see Raina go, and I’m still not really down with fridging female characters, but her journey was emotionally satisfying.

The conclusion of Skye’s journey got even better as the episode saw her team up with Mack, who was the character that was most distrustful of superpowered people. It was also fantastic that her new powers were inhibited so she had to rely on her regular human abilities, proving that Skye is a hero with or without superpowers. She got to confront her mother and forgive her dad and begin her journey towards figuring out where powered people fit within S.H.I.E.L.D. Just everything about Skye’s journey was brilliant. (And I am so excited about Caterpillers!)

This season FitzSimmons became Fitz and Simmons and it was fascinating to watch them discover who they are without the other. Fitz became more compassionate and Simmons was harder. But both had already reached the conclusion of their journeys of discovery before the finale arrived, which might be why “S.O.S” felt like a bit of a regression for them. Fitz is in the field (his early speech problems all but forgotten) – he even gets to kill the bad guy – and Simmons seems to have come to terms with powered people. 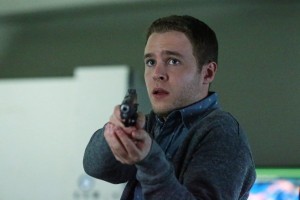 The only significant thing that happens to Fitz and Simmons for the majority of the episode is the fact that they finally discuss their feelings, and it seems that Simmons has changed her mind and decided she does want something romantic with Fitz. Now I’ll admit to shipping them a little in the first season, but then they handled the unrequited aspect so well that I lost interest in them as couple because it wasn’t as interesting as watching them rebuild their friendship. It was so refreshing to see a female character not automatically fall in love with any guy that shows interest in her, and I think they have undermined a truly beautiful relationship by choosing to make it romantic.

Ultimately while this episode was fun and exciting, there were a number of emotional climaxes that just didn’t hit the mark for me. I’ll leave you will my two demands for Season 3. First make Henry Simmons a series regular because he is pure gold that should not be wasted. Second, Simmons better not actually be dead at all because that would be unacceptable.