After the emotional freefall that the SPN fandom was put through last week with the death of the beloved Charlie Bradbury, you’d think that Supernatural would try to win us back. Instead, we are even more emotionally compromised, thanks to the last few minutes of the episode. Or at least, I am. 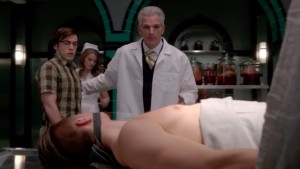 I’ll get to that, but let’s talk about the episode first. The Stynes, ugh. Wow, was that a lame introduction last week. They were a short-lived and pointless evil bad guy arc. And you get megadouche points for insulting Dean’s taste in music and trying to burn the photo of his mother! I am not even going to waste anymore words on them. I am glad they are gone. I don’t even bemoan Dean for killing the kid in the end. He was the embodiment of their version of Sam Winchester (i.e. floppy hair, backpack, going to California), and he would be dragged back in. I saw the reasoning, and though it was brutal, I understood. Mark of Cain Dean was vengeful, yet logical. 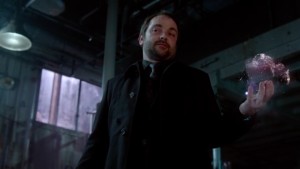 I’m go glad that Crowley finally grew a pair. Yes, he was trying to be good, trying to be human. It was a hold over from “the cure” from last season, but I’m really happy he’s (at least angling to be) evil again. One thing I do find very interesting, his eyes (for the first time in the body of Mark A. Sheppard) turned colour! They were red, too! Very interesting. I would additionally like to point out Sam’s description of Crowley: “the accent, the suit, the snark” – PRICELESS! Also, we now know that he’s a lot more powerful than he let on, or possibly Rowena isn’t as strong as she thought. He dug a bullet out of himself! C’mon, that’s pretty hardcore. Also, Sam now owes him his life. I can definitely see Crowley collecting on that. Rowena is definitely worried, and she should be. Her son isn’t as spineless as she thought. I truly think this might be a turning point for Sam. He needs to (possibly?) protect himself from Crowley. I can see him going to Rowena for help. I never thought I’d say it, but I ship it. Maybe not romantically, but I like the pairing even if it’s for them to avoid mutual destruction. Though Cas is happy to kill Rowena just for the fish comment, someone better tell Crowley.

Now, Dean. Well, the episode started with flashbacks of Charlie. Not cool. I started off the episode a bit misty and ended it shaking and trying not to cry. Hey, TPTB, you suck. Are we not in a fragile state as it is? Hell, let’s just make it worse for the LOLs. So… Dean was pretty badass in every which way in this episode. Definitely harkened a bit back to the Purgatory Dean, which I kind of miss. This was definitely him on a rampage, no doubt about it. He pulled out some pretty sweet moves and was kicking ass both with and without any weapons. I honestly approve. I’m not sure if it’s because he’s pissed about Charlie or it’s the Mark, but it seems like it’s too focused to be random killing. 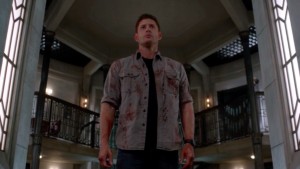 So this brings us to the last few minutes of the episode. I have to admit, I’ve had to pause a few times writing this paragraph already. There is a lot crammed into this scene. First of all, it took the entire episode for Cas to catch up with Dean, which pissed me off at first. I can probably count on both hands the amount of times these two have been in the same scene this season. (I know, my shipper hat is showing, I know I tried to keep it just to Tumblr, but this scene…*eats an entire pie to calm nerves*) Let’s first talk about Cas’s explantation to Dean about the Mark:

Cas is right. Now that he has his grace back, he will be the only witness to what Dean will become. It is heart-wrenching. Even if it’s just watching your best friend doing that (regardless of shipping), I wouldn’t wish that on anyone. That was definitely a kick in the feels. But, being Supernatural, they love to add insult to injury, so we get what has been in the minds of everyone since 8×17 – a reverse crypt scene:

Wow. I just have no words for the fact that Dean beat up Cas and he didn’t fight back. Like what happened in “Goodbye Stranger”, just the other way around. I honestly am feeling too raw to talk more about this scene. I knew that Dean wasn’t going to stab Cas (the camera stopped on him and his hand was shaking – SO WAS I). Honestly, I was a bit pissed that it took the whole episode for them to be in the same room, but I was speechless after this. I still am, to be honest. I can’t believe that Dean would hurt Cas in such a way. It’s not right (not in any way, shape, or form), but for symmetry of story, it works. Cas was being controlled by a higher power (Naomi), and so is Dean (the Mark of Cain). I really can’t talk about this more without fully throwing on my whole shipper outfit (I’ll leave that to Tumblr, because I’m trying to be as impartial and respectful as possible), but at the least, you have to recognise that there is still a profound bond between Dean and Cas, parallel storytelling aside. 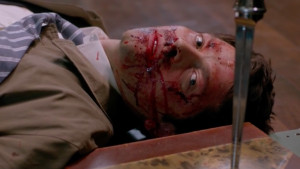 Ultimately, there is no way that Supernatural can repair the damage it did by killing Charlie, and I’m really worried they may dig themselves in deeper. (Yes, I’m worried for Cas. I always worry about him – so sue me!) Though they have seemed to fix a few things they messed up, or at least tried to make some sort of amends. I have to say, regardless of the atrocity that was “Dark Dynasty”, I actually really liked this week’s episode. A lot. There has been a lot of backlash on social media about Charlie’s death, many fans giving up on Supernatural, and there was a surge of discussion about it with the #askcw on Twitter today in preparation of the upfronts this week. The other two most common themes (that I saw) were Wayward Daughters and a certain popular ship… I don’t know what is going to happen next week, but I know that I am going to need to have a whole pie and some hunter’s helper to get through it (especially now that I’ve watched the promo about 50+ times – did you see Cas in the mirror before Dean breaks it?! And is that Metatron’s grace used for some spell with Crowley, Rowena, and Cas all in the same room?! And, yes, I know my fangirl is showing), because I know that it will definitely be one heck of a Hellatus this summer. Chuck help us all.