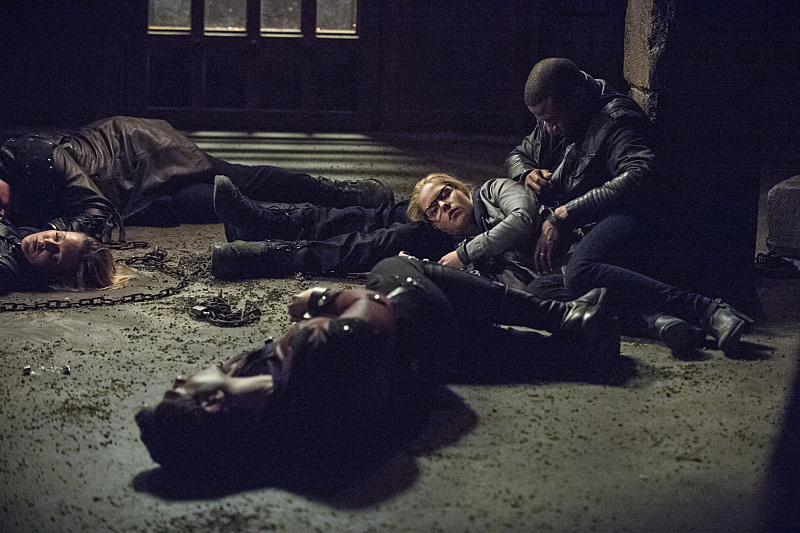 This review is going to be short because try as I might, I really don’t care about anything that has happened in this season of Arrow. Well that’s not entirely true; I care that they fridged my fave queer female character. I also care that they took another female character’s agency to do it. And I care A LOT that the man responsible has not received any retribution for his actions. So yes, I care about some things but mostly I’m just kind of meh about this episode, and this season in general.

In the final episode of this long drawn out and incredibly boring season, Oliver has to become someone new… again. It’s a good thing too, because everything is coming up roses for whoever he is now. Despite the fact that he’s acted like a total ass for much of the season he basically gets everything he wants. He defeats Ra’s al Ghul, Felicity forgives him, and he gets to drive off into the sunset after giving a supervillian access to an army of assassins.

Nothing that happened in “My Name Is Oliver Queen” was particularly surprising or interesting. I guess it kind of completed the mess of storylines that made up this season, but who cares? This whole season can be boiled down to one thing: building a team of heroes so that Oliver doesn’t HAVE to be the Arrow anymore. And they did that. Team Arrow 2.0 is great; I would watch a show about them fighting crime in Starling City. I also understand that it’s thematically important for Oliver to let go of his mission so that he can make the choice to come back and fight in Season 4.

You know what had ZERO impact on the emotional arcs of Arrow’s main cast? Ra’s al Ghul, the League of Assassins, Amanda Waller, and Hong Kong. Without those things, these characters would probably still be in the position they are in right now and that is REALLY not a good thing. It meant nothing, and it wasn’t even fun to watch. It was just stupid and I am very disappointed in Arrow for making me watch a whole season of this mess.

The only thing to do is leave things behind and hope that the Arrow team remember what made this show work in Season 4. Only time will tell.

Previous:Thor #8 Review: The Woman Beneath The Mask
Next: “Mad Max: Fury Road” Is Not Quite Feminist Propaganda But Still Damn Good