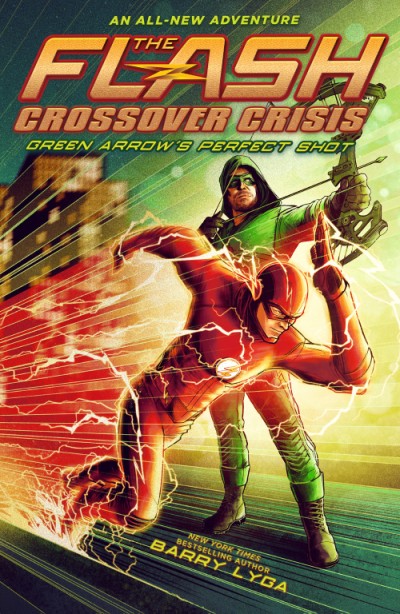 Join Barry Allen, Oliver Queen, and the rest of Team Flash and Team Arrow in an all-new adventure from author Barry Lyga. Crossover Crisis: Green Arrow’s Perfect Shot is the first in a trilogy that finds our heroes facing a crisis that could end not just their universe, but all of them.

I have apparently been living under a rock for years, because I didn’t even know that there were books based on the DCTV CW shows; that was silly of me. Of course there are books based on those shows. I mean, even Teen Wolf had books. Anyway, the Crossover Crisis series will feature characters from The Flash, Arrow, Supergirl, and Legends of Tomorrow. Green Arrow’s Perfect Shot focuses primarily on Team Flash and Team Arrow and has a mystery in each city. In Star City, a serial bomber somehow connected to Brie Larvan is terrorizing the city, while in Central City, a dimensional breach has opened and thousands of refugees from Earth 27 are pouring through, fleeing Anti-Matter Man, who has rendered their planet uninhabitable.

Green Arrow’s Perfect Shot reads just like an episode of The Flash with one key difference – Flashpoint never happened. All of the characters are perfectly recognizable; I can picture them clearly and hear their voices in my head. There’s not a lot of introspection or exposition, but in a book like this where we already know the characters, they’re really not necessary, and I don’t think the book is lacking because of it.

The writing style is simple, and this is a quick, easy read, but it isn’t dumbed down. I imagine it’s much like reading a script for one of the shows. Also, as someone who is familiar with both shows but hasn’t watched in quite some time, I wasn’t lost or struggling to figure out who was who or what was going on. There is backstory peppered throughout, and for people who are caught up, it might seem a little redundant, but for someone like me, it was very helpful in allowing me to follow along. I really liked the story and am completely intrigued by the concept of the alternate timeline – I kind of hope that comes up at some point in the series.

Fans of The Flash and Arrow who are looking for more adventures with these characters will like this book. It was rather an enjoyable read. I’m looking forward to the next books in the series!

Crossover Crisis: Green Arrow’s Perfect Shot by Barry Lyga is published by Amulet Books and is currently available wherever books are sold.

*I was provided with a copy by the publisher in exchange for an honest review. All opinions are my own.*