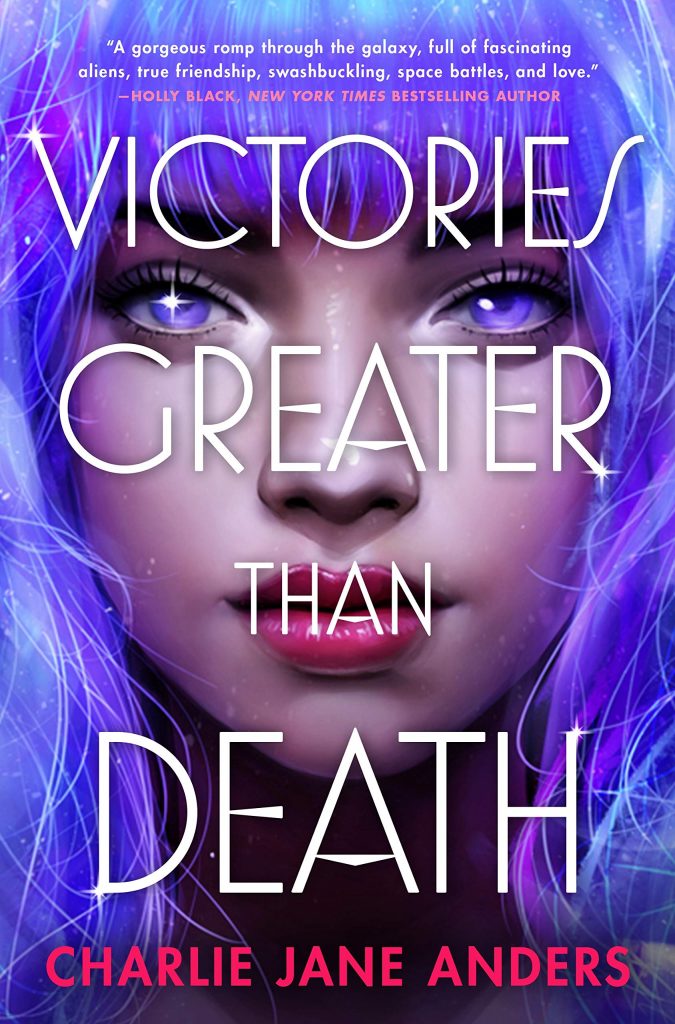 Victories Greater Than Death takes you on a fun and emotional journey that explores heroism and identity.

I received an eARC of Victories Greater Than Death from Netgalley and Tor Teen in exchange for an honest review. All opinions are my own.

Charlie Jane Anders, the author of the critically acclaimed All the Birds in the Sky and The City in the Middle of the Night, exceeds expectations in her upcoming novel Victories Greater Than Death (April 13, 2021).

While reading, I had to put my Kindle down after reaching the 70% mark. I didn’t want Tina’s story to end. Doctor Who, She-Ra (2018), and Spider-Man: Into the Spiderverse come to mind while reading. There’s action, fascinating alien worlds to explore, and high stakes to keep your eyes on the page. Anders has written a compelling story that will resonate with its target audience.

Anders wastes no time in getting you buckled up for the ride. Tina’s voice is established from the first page. She speaks and acts like the average teenager today, even though she has a destiny that she must embark on once the time comes. She is the clone of the space hero Captain Thoah Argentian, her DNA masked as a human on earth to avoid being hunted by enemies. When those enemies have tracked her down, she and her best friend Rachael are transported to the spaceship The Indomitable, where a diverse team of aliens awaits the arrival of Argentian’s clone.

Victories Greater Than Death navigates themes about supremacy, genocide, heroism, and identity. Tina questions her existence as the clone of an infamous alien hero. She doubts her ability to live up to Argentian’s legacy. What I still don’t see in a lot of superhero media is the vulnerability and sense of self that comes with the package. Tina’s personal journey mostly revolves around her fears of failing her human and alien friends. At the end of the day, she is a teenager, and there are moments where she releases her fears and doubts.

The story’s external conflict involves the ongoing battle with the Compassion, a group of aliens that have committed genocide despite their aim to spread peace throughout the galaxy. The Compassion’s leader Marrant, Argentian’s enemy and former friend, wants to achieve a superior form of existence. An ancient alien race called the Shapers has left behind a superweapon that could grant Marrant’s wish. This part of the story seamlessly intertwines with Tina’s arc. In between The Indomitable crew’s mission in defeating the Compassion, Tina wonders about her place in the universe. Her relationships with the other characters, particularly her developing romance with Elza, adds dimension to Tina’s narrative arc.

Besides Anders’s carefully crafted scenes and balance of action and interiority, her sensitivity in human diversity is impressive and appreciated. The aliens and homeworlds show Anders’s infinite imagination, but her attention to her human characters deserves recognition and praise. The story introduces Yiwei (Chinese), Damini (East Indian), Keziah (Black British), and Elza (Black Brazilian, travesti). Chosen to help defeat Marrant and the rest of the Compassion, they apply their skills and talents while adapting to life on a spaceship. However, the story also allows room to develop these characters, putting them as people first. Anders had consulted with sensitivity readers to make sure those characters are represented well.

An exciting story that explores what it means to be a hero, Victories Greater Than Death is a fantastic start to a new YA series.