To All Would-Be Wanderers: Consider “The Ten Thousand Doors of January” – Review 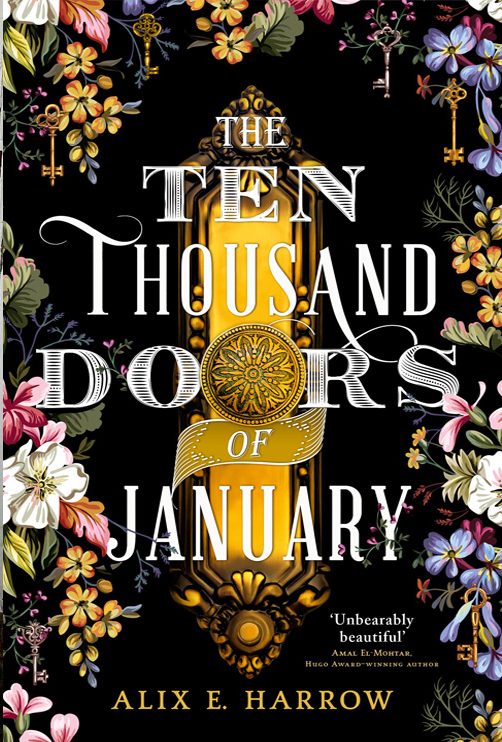 This past weekend I was walking through Central Park, and as I was wandering, I got the sense that there were certain spots in the park that are gateways to elsewhere. This probably had something to do with the book I was reading, The Ten Thousand Doors of January, which follows a young girl as she learns that there are doorways that lead to other worlds and the lengths to which men will go to keep knowledge secret.

The Ten Thousand Doors of January by Alix E. Harrow is the story of January Scaller, a mixed-race young girl, the daughter of a scholar and an archaeologist, raised by her father’s wealthy benefactor as he traipses across the globe looking for treasures from lost civilizations. Her only friends are Samuel, the grocer’s boy, Jane, the African woman paid by her father, and her ill-tempered dog, Bad. One day, January discovers a book – The Ten Thousand Doors – in a chest, and through reading, she learns about Doors, gateways between worlds. That same day, she learns that her father has disappeared and is presumed dead; her life is not the same after that.

Reading this book is almost like watching a dream; it is, quite literally, other-worldly. The writing is lyrical, magical, and immersive; it’s difficult to believe that this is a debut novel when you look at how perfectly polished Harrow’s prose is. For anyone who has ever looked at a stone bridge and wondered if crossing underneath it would lead to a land of fairies and magic, this is a book for you. It’s escapism at its finest, a call-to-arms for would-be wanderers who long to see just what is out there.

The Ten Thousand Doors of January is imbued with the charm and grace of nostalgia for a bygone era while also acknowledging that those memories are being viewed through rose-tinted lenses. Set in the early 1900s, January is afforded a life of wealth and privilege that a mixed-race girl would not have been granted at the time, but she is not content. She wants to travel with her father; she wants to escape. It isn’t long before her idyllic world view is shattered. Her safety and security vanish at the same time her father does, when she discovers that money can buy anything, and that the powerful will stop at nothing to stay that way.

January as a protagonist is incredibly appealing – a girl who has never wanted for anything who must strike out on her own for the first time, a damsel in distress who rescues herself. Jane, likewise, is a thoroughly compelling character with similar qualities; there’s a certainty about her that I envy. If only I could be that sure about where it is that I belong. Samuel is a little underdeveloped, but that’s mostly because he isn’t quite as important to the story as the two ladies. The villains are shadowy, faceless men corrupted by a power they manufactured and all the more frightening for it.

The book-within-a-book format also tells the story of Adelaide and Yule Ian, two people from different worlds who meet by chance, are separated, and move heaven and earth to find each other again.

Ever since I was young, I was a dreamer. My greatest wish as a child was to be a Care Bear, because I wanted so badly to live in Care-A-Lot. The Ten Thousand Doors of January is a book that resonates with me because it’s about extraordinary magic in ordinary places, which is something I always hoped I would discover when I was younger. That a door is not a door, but a chance. January’s story is haunting and hopeful, and the overall theme is about the perseverance and enduring faithfulness of true love. This book has joined There Will Come a Darkness on the top of my recommendations list.

The Ten Thousand Doors of January by Alix E. Harrow is published by Orbit/Redhook and is currently available wherever books are sold.

*I received an advance copy in exchange for an honest review. All opinions are my own.*