Hatch a Plot with “The Storm Crow” 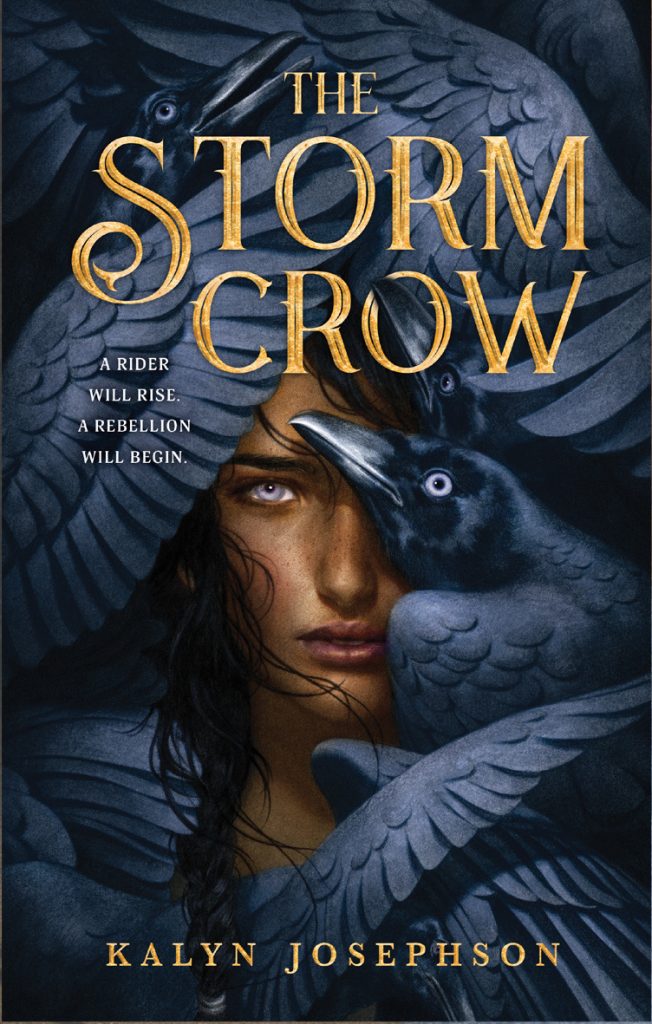 For my return to my regularly scheduled reading list, I read The Storm Crow by Kalyn Josephson. The Storm Crow is an engaging fantasy about a young princess who must marry the son of her nation’s greatest enemy in order to stop a war.

Rhodaire is a tropical kingdom, almost entirely dependent upon the aide of the magical Crows, who are a fundamental part of every aspect of their daily lives. But then one night, soldiers from the Illucian empire invade, kill all of the crows along with most of their riders and the queen, and destroy all of the eggs. Rhodaire is brought to a standstill; without the Crows, the country is dying, and newly-crowned Queen Caliza has asked her sister, Thia, for an impossible task – she must marry Ericen, the Illucian crown prince in order to stop the coming war. Thia, distraught, takes refuge in the destroyed rookery, where she stumbles across a single, solitary egg – the storm crow, the last of its kind.

The Storm Crow was entertaining and well-written, albeit with some unfortunate tropes. I loved the relationship between Thia and her best friend/bodyguard Kiva, even though I found it odd that Kiva all but abandons Thia in hostile territory to romance one of the servants in the Illucian palace. (There is more to it than that, obviously, but it’s still strange to think that neither of them seem at all worried about Thia wandering around without protection.) Ericen is a wonderfully complex character, and I honestly wish we got the chance to be in his head; but the Illucians, in general, come across as stereotypically evil, so I would like to see them get developed more. In her attempts to hatch the egg, Thia begins a relationship with Caylus that smacks of insta-love, which is frustrating. Much of her time with Caylus is glossed over and lumped into paragraphs that mostly describe their egg-hatching experiments with little-to-no time spent on their growing relationship.

There is diversity in the characters, which is always appreciated. The servant Kiva is romancing is a woman; one of Ericen’s biggest rivals has a boyfriend. The different kingdoms mentioned vary greatly by climate and culture, including one that seems to be mostly ruled by warrior women. Thia has depression, which is a rare thing to have in a fantasy novel, though referring to it as “depression” seemed out of place given the setting. Thia has burn scars from the night Rhodaire was attacked; Caylus is similarly scarred from events in his past.

I’m a huge fan of fantasy so I devoured this book, but as a fan of fantasy, it’s a pretty run-of-the-mill story. The idea of animals having magic instead of people is certainly interesting – and I hope that’s something that’s explored further in the next book – but there isn’t anything particularly groundbreaking in here. That isn’t to say this book isn’t a good read – I enjoyed it very much; it’s just a fairly straightforward story. I would like to mention this is one of the more well-written debuts I think I’ve ever read. If I hadn’t known this was Josephson’s first novel, I wouldn’t have been able to tell.

The Storm Crow by Kalyn Josephson is published by Sourcebooks Fire and will be available July 9 wherever books are sold.

Previous:Stranger Things 3 Made Me Feel Every Emotion Imaginable…and I Loved It
Next: “Spider-Man: Far From Home” Offers an Enjoyable MCU Chapter Post-Endgame – Movie Review