Do Yourself a Favor and Read “There Will Come a Darkness” 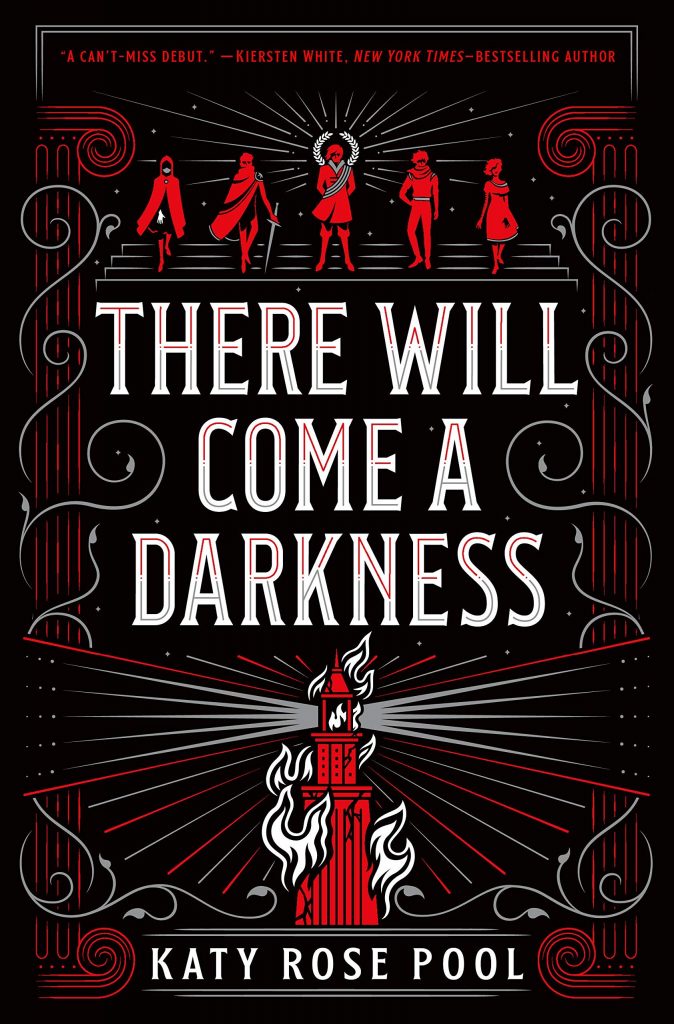 Occasionally a book will come along that absolutely knocks me off my feet – a book that makes me want to shove my copy in everyone’s faces and go, “Have you read this? You should, IT’S AMAZING.” Currently, that book for me is There Will Come a Darkness by Katy Rose Pool.

There Will Come a Darkness tells the story of a group of five interconnected strangers who don’t yet realize how they’re all connected. They live in a world that was once ruled by the Seven Prophets, who bestowed upon humanity the gift of the Graces. One hundred years ago, the Prophets disappeared, but not before leaving behind a final prophecy that foretold the end of the world. And now the Age of Darkness is coming.

In this book, the first in a trilogy and Pool’s debut novel, you enter a richly-detailed and beautifully crafted world (I could almost taste the food) where magic and faith intertwine, where a Grace can make one stronger, help them see the future, or allow them to raise the dead. It introduces a power structure skewed heavily in favor of those who are Graced and explores the relationship and the power struggles between those with abilities and those without. It also examines the idea of free will versus prophecy, and how much of what happens is because of your own choices and how much is because of circumstances beyond your control.

There Will Come a Darkness plays with the conventions of the fantasy genre, featuring fully-developed, amazingly flawed characters whose actions are completely unpredictable. Our main characters – Ephyra, Beru, Hassan, Anton, and Jude – all come from different backgrounds and cultures. Each of those cultures is well thought out and evident in their behavior and perspectives. One of them is a warrior, one is a gambler, one is a murderer, one is a prince, and one is dying. You’ll have to read the book to learn which one is which, but each one is distinct and goes through their own personal journey. Some of them are more frustrating than others, based on their actions, but they are, I feel, the most human. Be prepared for a lot of inner turmoil and plenty of wrestling with personal demons.

This is a world where the major division is between those who are Graced and those who are not, so there is no thought to things like skin color or sexuality. It’s an excellent meld between classic fantasy tropes and some more modern sensibilities, for those of us who wish to see a little more diversity and inclusion in our fictional worlds.

The action moves at the perfect pace; it’s almost too fast, but maybe that’s just because I kept skipping ahead and then having to go back and reread. Told in alternating points of view between the five major players, you don’t know what to expect, who you can trust, or what will happen. Short chapters bounce back and forth between characters, moving us across the city or even across the country, giving us glimpses of a fully-realized world that this first installment only hints at. I was intrigued right from the start, but the more I read, the more immersed I became in the world. The action builds naturally to a thrilling, frustrating conclusion that has me anxious for the next book.

If you can only pick up one of the books I’ve reviewed this year, let it be this one. Do not miss your chance to join what will surely be the next great YA fantasy trilogy at the beginning. Do yourself a favor and read There Will Come a Darkness.

There Will Come a Darkness by Katy Rose Pool is published by Henry Holt and Company and will be available September 3 wherever books are sold.

*I received a copy from the publisher in exchange for an honest review. All opinions are my own.*