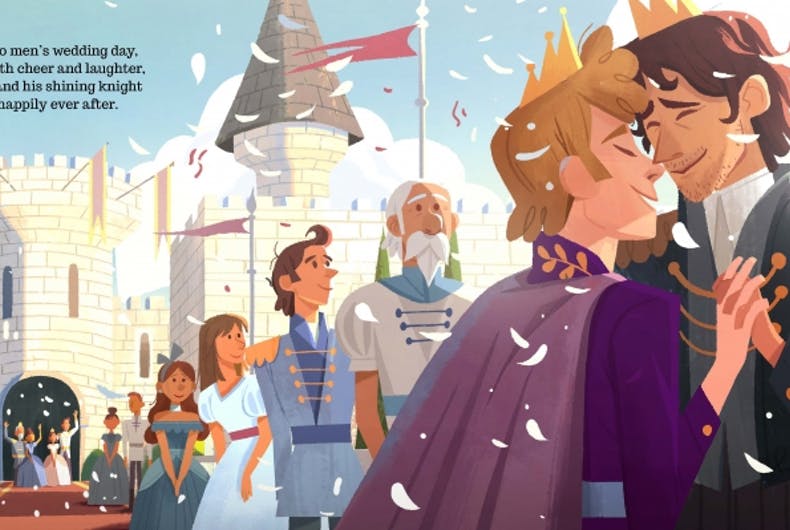 A West Virginia library pulled copies of the same-sex fairy tale children’s book Prince and Knight, but the LGBTQ+ organization GLAAD and several other organizations are fighting back against the ban.

The book Prince and Knight is a “fairy tale in rhyme about a prince who is looking for a partner.”  As the story progresses, that partner ends up being a knight who helps save the kingdom from a fierce dragon. According to West Virginia based Calvary Chapel Mountain Highlands Pastor Josh Layfield, that’s a major problem.

The pastor contacted the Library Director with his ‘concerns’ and the book was immediately pulled from the shelves. The Library Director scheduled a meeting with the board to make a final decision on the matter, but Pastor Layfield took to social media to blast his anti-LGBTQ+ rhetoric to an even wider audience.

“As a father of four boys, I know my boys love princes, kings, and rulers. They love knights in shining armor and they emulate these men by acting them out in play. This book is a deliberate attempt to indoctrinate young children, especially boys, into the LGBTQA lifestyle. This book is deliberately appealing to their imagination, creativity, and their innocence when they still think girls have “cooties”. Children’s books, which are promoted by the state and put into circulation by taxpayer funds, should remain innocent. Unfortunately, this is an intentional leading of children into sin and parents and citizens within this community must be mindful of what is happening.”

The board meeting was scheduled to take place today, but the Upshur County Public Library suddenly postponed the gathering, meaning the book will remain off the shelves even longer. However, this delay also means those of us on the opposing side have even more time to organize and push back against the Pastor’s narrative that this book is somehow ‘inappropriate’ for the children of West Virginia.

The idea that this children’s book isn’t ‘innocent’ because it features two men falling in love is obviously ridiculous. Organizations, particularly GLAAD, aren’t letting this type of rhetoric go unchecked. Buckhannon Pride, the local LGBTQ organization, has started a Change.org petition that urges the library to keep the book available. The petition was then signal boosted to a national audience by GLAAD. (You should obviously go sign it).

“Treating LGBTQ+ books as dangerous reading material will only create more division in our community,” the petition says. “The book was written for children to show acceptance and love, and it is important that children have access to these types of stories that’s been proven to reduce bullying, hate crimes, and suicide amongst LGBTQ+ youth.”

The author of the book, Daniel Haack, has also spoken out about the issue. He points out the obvious, that “all the gay adults who grew up only reading about straight romances,” and yet we are all still gay. The idea that a children’s book could change someone’s sexuality is absurd.

But the reaction to the ban has also been somewhat uplifting for Haack.

“[It’s] so heartening to hear from all the local parents and community members who are standing up in support of the book and its celebration of love and acceptance,” Haack said. “In many ways, it’s just like the brave prince and knight facing the dragon to protect the vulnerable citizens of their kingdom, and whatever happens, the children of Buckhannon will know they still have plenty of kind, loving and inclusive neighbors.”

West Virginia has recently become a battleground for LGBTQ+ rights in America so, sadly, this kind of attack on something as innocent as a children’s book isn’t exactly a surprise. However, due to recent battles, the LGBTQ+ community has been galvanized to push back against this type of attack. They won’t be mowed over by bigotry.

“We at Buckhannon Pride try to set an example of diversity within rural West Virginia,” Buckhannon Pride said in a statement to GLAAD. “It has been a tough year for our LGBT community within our state, from one of our state delegates using derogatory language in the peoples house, to a Drag Queen Story Time in Morgantown having to cancel due to threats on the Queens lives, our towns non-discrimination ordinance failed to pass and now a book being censored. LGBTQ folks are part of this great town and state.”

The Upshur County Library, though it has postponed the public meeting on the issue, conveyed to WHSV that the book won’t be banned from the library completely, but could potentially be removed from the children’s section. They’ve vaguely set a time frame of ‘before January’ for an official decision, but no other details are available.

Regardless of whether the book is removed entirely or just removed from the children’s section, this type of censorship is detrimental to the LGBTQ+ community of Upshur County and other communities struggling for acceptance. These types of books weren’t available to me when I was a child and it took until middle school for me to stumble upon media that helped me understand my own differences. And even for heterosexual youth, this type of book would help normalize giving respect to people with same-sex attraction.

But according to people like Pastor Layfield, this is ‘indoctrination’ and sinful.

“Whenever I used to bring my kids here, we would sit down, I would grab a magazine, they would grab books,” said a resident of Upshur County, Robert Allen, explaining his bigotry in relation to this controversy. “We’d go home and they would act out what they saw. I don’t want my kid grabbing five books off the shelf and that being one of them.”

I hope his kids do pick up this book. I hope a lot of kids do, and that they learn about the diversity of the world around them. Maybe the next generation will be just a bit less hateful than those that came before them. I hope that children growing up feeling like something is different inside them can look to literature like this and realize that that difference is okay. And I hope that other children treat them with the love and respect that I didn’t have at that time in my life.

We aren’t trying to convert people by making these books available. We just want to not be hated and marginalized. We’re tired. Let the cute children’s book remain available to the masses. And let bigotry against the community fade away into the past.