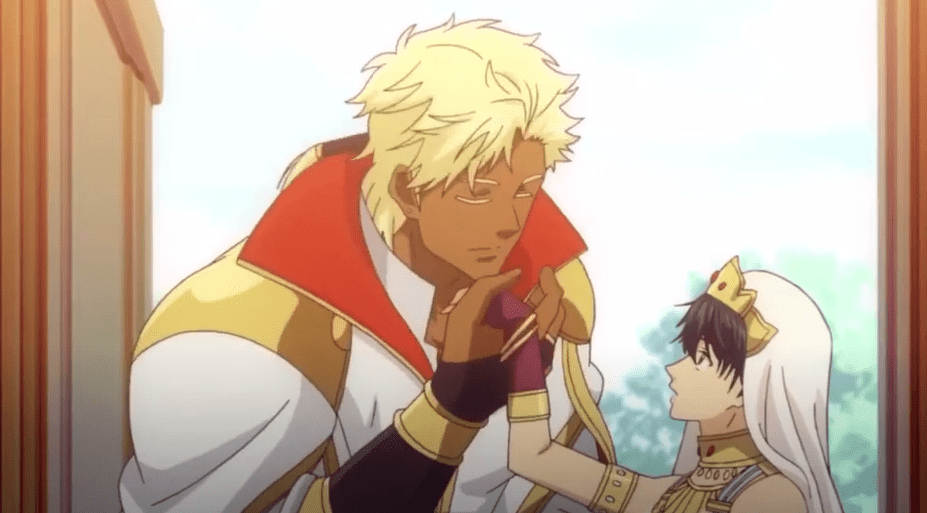 Caius spending time with Koichi in ‘After the Party’ (Image: Screengrab)

‘After the Party’ gave Koichi the answers he wanted. We know Koichi’s been doubtful about Caius’s love. With how things progressed between them in this episode, you know that Caius’s feelings are true.

The previous episode had Medina, Caius’s ex-finance, show up to the castle. Of course, Koichi didn’t feel comfortable about her appearing out of nowhere. But before the writers had those two interacting with each other, we got a bit of a time skip. ‘After the Party’ opened with Koichi wearing a very skimpy outfit. It was time for Caius to introduce his spouse-to-be in front of everyone during the kingdom’s anniversary.

This was Koichi’s first time being in close proximity to other titans. I liked how Caius placed a protective arm around Koichi’s shoulders to assure him that he’s safe. Not only that, but Caius also spent most of the event sitting with Koichi. As the ruler of the kingdom, Caius was supposed to be mingling with others during the anniversary. However, all he cared about was being close to Koichi. Ah! The feels.

The mood of the event instantly changed when Medina walked in. Turns out the rest of the titans aren’t fans of her. Apparently, they didn’t like how easily she broke off her engagement with Caius after hearing the prophecy about how their marriage will ruin the kingdom.

As far as my opinion goes, I applaud Medina for what she did. She understood why she couldn’t marry Caius even though they loved each other. Due to how much of a romantic Caius is, it took a lot of strength from Medina’s side to call off the engagement for the good of the kingdom. Other titans should show her more respect.

I liked how Caius came to defend her. He told everyone that due to Medina being a royal guest, he won’t tolerate anyone disrespecting her. His declaration instantly silenced the rest of the titans. The two are clearly good friends and I’m here for it!

‘After the Party’ revealed why Medina came to the castle. She received news about there being trouble between Caius and Koichi. So, she decided to pay Koichi a visit to hopefully have him understand his relationship with Caius. If Koichi felt jealous about Medina being near Caius, that would mean that he’s got feelings for Caius.

In my opinion, the manga did a better job of explaining Medina’s motivations. The entire thing was too rushed in the anime. I have to say that I appreciate the writers sticking to the source material and not turning Medina into a jealous ex. She’s a good being and I hope to see her again soon.

The current episode also allowed us to learn more about Koichi. He’s a young man who constantly considered other people’s feelings before his own. While Medina was focused on discovering if Koichi was jealous of her, he was feeling bad for her in return. Koichi blamed himself for coming between Caius and Medina’s love. He’s such a mess!

After everyone shared their true intentions with each other, the episode showed Koichi finally deciding to sleep with Caius. One of the things I like about The Titan’s Bride is how it’s been handling consent. The entire scene featuring Caius and Koichi being intimate with each other was done quite well, in my opinion. Caius only did what Koichi was comfortable with and didn’t force or emotionally manipulate him into doing something else. So, yay!

With how the episode ended, I can’t wait to see how the anime will handle Koichi’s mysterious ailment.

You can view the censored version of the episode for free right now.

Did you watch ‘After the Party’? Let us know.

Previous:Boruto: Naruto Next Generations 1×158 Review – ‘The Man Who Disappeared’