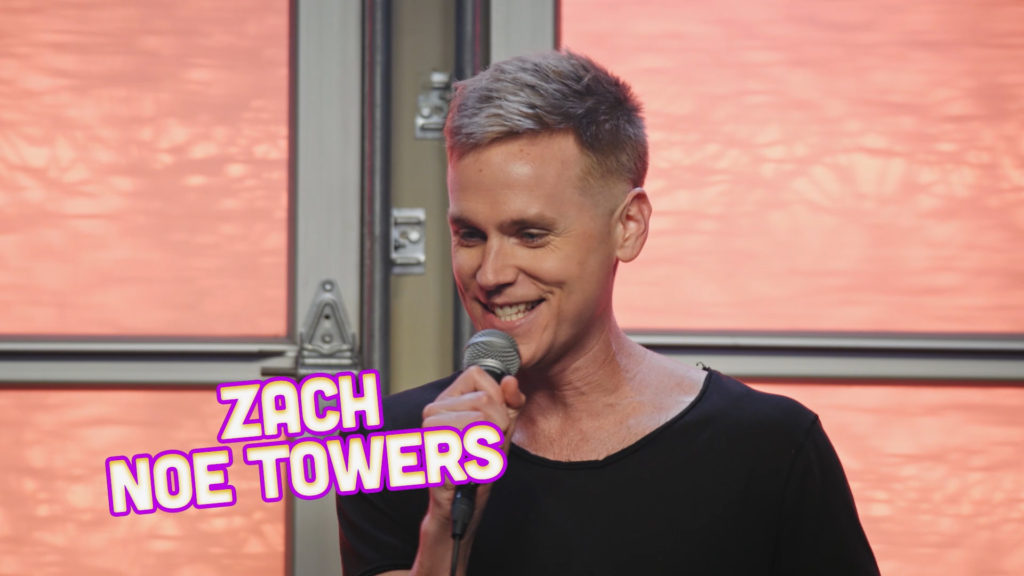 If you have been looking for a stand-up comedy show featuring LGBTQ+ talent, OUT On Stage should definitely be on your radar. With the series set to premiere on Dekkoo come January 17, 2019, we were able to interview the incredibly funny host Zach Noe Towers.

I am all for freedom of speech in comedy, but there is a thin line between being funny and coming across as intentionally rude. The LGBTQ+ community has continued to be the target of many jokes. And no, being homophobic for the sake of a few misplaced laughs or wanting to seem edgy doesn’t make you a funny comedian.

That is why I greatly appreciated watching OUT On Stage. It is the first ever all queer stand-up series!

If you want well-written jokes about the queer community, why not support queer voices who are ready to bring all such material (and more) to the table?

I will definitely be doing a feature-piece/review near the premiere date. Until then, let’s get to know Towers a bit more.

The Geekiary:  How young did you realize you wanted to become a comic?

Zach Noe Towers: I was probably 19 or 20 when I started watching stand-up comedy and realizing it could be a path for me, but I’ve loved making people laugh since as young as 8 or 9 years old.

What drew you to a project such as OUT On Stage?

It’s a platform for queer voices! What’s there not to be drawn to? This project provides such an interesting variety of comics, there’s bound to be something for everyone. I was so happy to share the stage with so many talented peers.

I got to provide a huge, long list of queer comedians to the producers and then casting went from there. The project was originally focused on gay male comics, but towards the end of the process it opened up to lesbian comics as well. If there’s a season two I hope a point will be made to keep broadening the diversity of the lineups. Representation from the whole LGBTQIA community would be ideal!

Any thoughts about the ‘PC’ (Politically Correct) police culture in comedy? Should comedy be ‘constricted’ by such standards? Where does the line between ‘offensive’ and ‘funny’ blur in your opinion?

I think comedians should be allowed to talk about whatever they want, as long as the material is more funny/smart than it is offensive.

Would you like to share what you think of the Kevin Hart 2019 Oscars debacle because of his tweets toward the gay community and how they were meant as ‘jokes’ he has grown out of?

I think we’ve all said things we could be issuing apologies for, and if you’ve truly out grown an ignorant phase of your life it should be incredibly easy to do just that: apologize. I think all most people want is an honest, genuine, heartfelt apology. If I were in his shoes I would be more than happy to give that.

Any advice you would like to share with young queer kids hoping to begin their career as comics?

Be kind. Be patient. Work hard. Hopefully shows like OUT On Stage will help clear a path for you to succeed.

I enjoyed the show a lot! Can we expect another season?

Because The Geekiary is about sharing what makes us fanboy/fangirl, what do you fanboy over?

Scary movies. I can’t get enough, even the bad ones!

What’s next for you?

Catch me on Dating #NoFilter on E! starting January 21, 2019, and season 3 of Dear White People on Netflix.

(Out On Stage – Trailer from TLA Releasing on Vimeo)

I hope you all add OUT On Stage to your watchlist. The queer community needs such platforms and our support. I will be back with more information about the upcoming show soon. I couldn’t stop laughing!