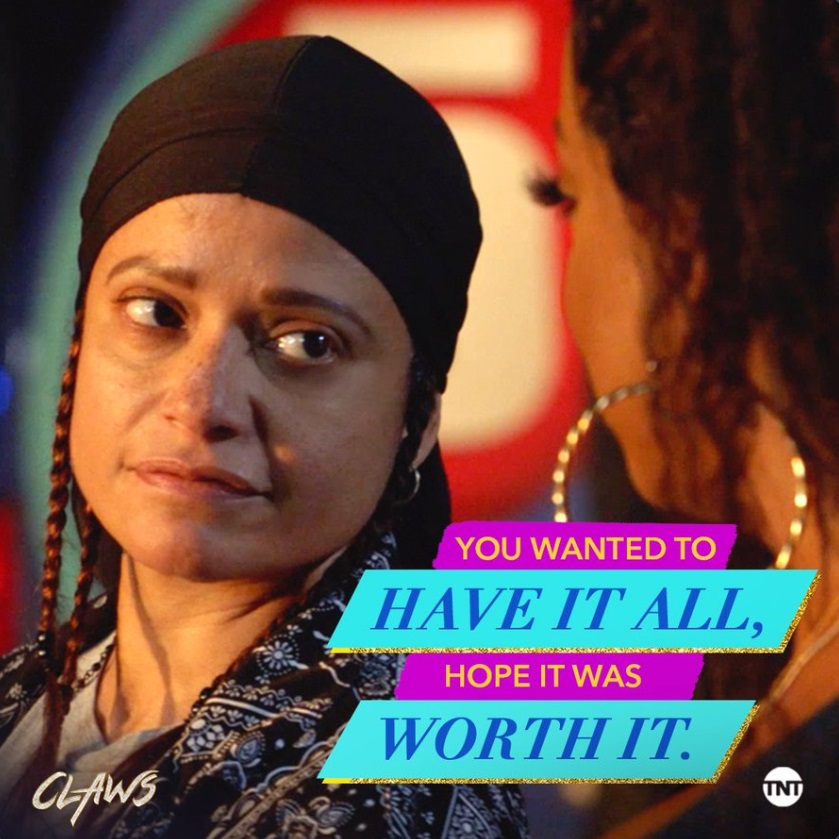 The season 3 finale of Claws, titled ‘Finna,’ closed up numerous plotlines that were introduced during the show’s third outing. While as far as I can tell this series hasn’t been renewed by TNT (yet), I hope to see more of Desna and her crew.

I was provided a free review screener of ‘Finna’ for review. The opinions are my own.

After getting rid of Melba Lovestone in ‘Melba Toast,’ the finale pitted Desna against the Triad member. With the Lovestones and the Governor killed, the Triad saw no use in keeping Desna alive. Of course, always being a resourceful woman, Desna immediately used Ann’s brother as a lifeline. The moment she mentioned his name, I knew Ann wasn’t going to go along with Desna’s plan.

Ann has lost a lot during this season. Getting her brother involved in such a dangerous situation was a bad move on Desna’s part. The current season has been showing cracks beginning to appear in Desna’s crew. Even though Desna loves Jenn, Polly, Ann, and even Virginia, her thirst for power can go to her head. Desna should have listed to Ann, all the way during the season three premiere, about not getting involved with the casino. But she didn’t listen, and things just grew worse for everyone.

I liked seeing Ann working with Joe to burn the casino to the ground. Both Ann and Joe didn’t feel appreciated by their bosses and it made sense for them to take matters into their own hands. Ann even managed to kill the Triad member. There are some fan theories about him still being alive. So, let’s see whether or not he appears if this series continues.

As for the rest of the crew, Polly finally let go of Joe and went back to Ken. I don’t know how long Polly and Ken will last considering Polly isn’t really in love with him. I was surprised to see Jenn’s storyline with EJ being dropped. Perhaps he will pop up again in the next season to gain custody of his daughter?

‘Finna’ also focused a lot on Desna and Roller’s relationship. After Toby framed Roller, Desna and her boyfriend had no choice but to run away. However, when the moment came, Desna couldn’t make herself leave her brother Dean behind. Will Roller return? I have no idea.

As for Dean, I liked how Virginia decided not to get back with him. Dean needed to face consequences after how he treated Virginia.

All in all, ‘Finna’ delivered a satisfying finale for the third season (and that takes writing talent). So, kudos to everyone involved!

Are you looking forward to more Claws? Let us know.