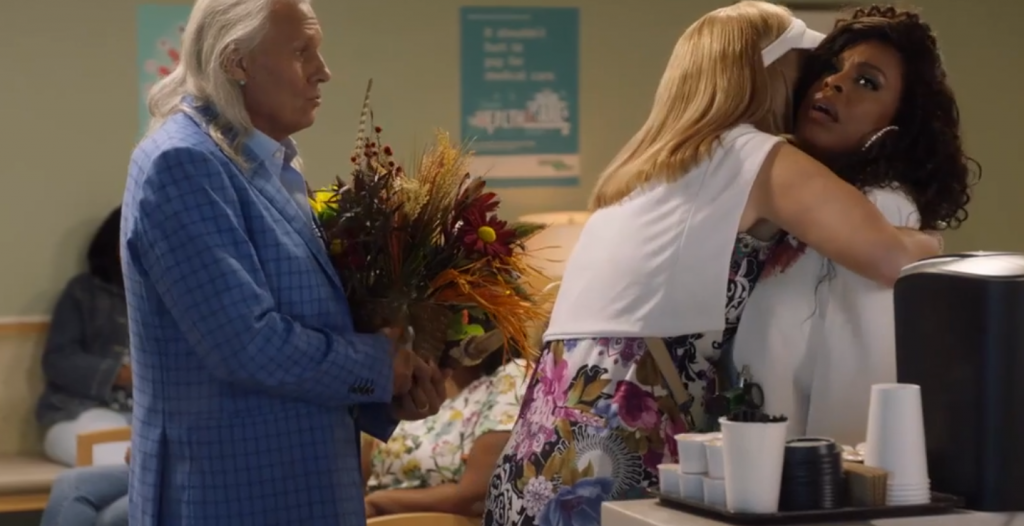 The Lovestones and Desna in ‘Just the Tip’ (Image: Screengrab)

Claws, one of the best TV shows currently airing, came back with an incredibly awesome season 3 premiere. ‘Just the Tip’ showed Desna that being a boss isn’t easy. She got introduced to new antagonists and I can’t wait to see how she and crew win this time.

I was provided a free review screener of ‘Just the Tip.’ The opinions are my own.

The episode picked up from where the season 2 finale left us. After Virginia got shot, Desna rushed her to the hospital.

Tensions are quite high for Desna after owning Ruval’s casino. Even though she wants to be a boss, uneasy lies the head that wears the crown. There are numerous people she can’t trust and the season 3 premiere introduced two more for her to handle.

Turns out, Ruval was a minor partner in the casino with the Lovestones being the major party. I didn’t like the Lovestones the moment they appeared onscreen. You could instantly tell they were a crazy married couple. The way they tortured their accountant was just bad. I want them gone. However, while I’m rooting for Desna and her crew, I’m also a bit worried because the Lovestones will play dirty.

‘Just the Tip’ served as a reunion for Desna’s crew after two members kind of separated during the second season finale. With Quiet Ann already offering support to Desna, Jenn came back after learning about Virginia’s condition. Polly, in a comedic sequence, decided to run away from the mental health facility to be with her crew.

Thankfully, Virginia survived the gunshot, but not before having an eye transplant. Due to Claws being a weird show, Virginia’s new eye was from a white old lady who was also a Reiki healer. I don’t know about you, but I kind of enjoyed seeing Virginia sharing some random sage advice after the transplant.

‘Just the Tip’ had Desna teaming up with Roller to try and find out what the Lovestones were really up to. Now, I’ve been clear I don’t like Desna and Roller as a couple because of the toxic past they share. They both have tried to kill each other during certain moments. While Roller has grown soft on Desna and wants to be with her, I liked how Desna told him she doesn’t have time for romantic entanglements right now. She has an empire to build. So, good for you, Desna!

As for other relationships, Ken is still in love with Polly. Ann and Arlene also had an intense bonding moment at the gym. I like Ann and Arlene as a couple, and I hope they’re able to fix the issues between them.

The main mystery in the premiere dealt with who shot Virginia. The good news is the writers didn’t make us wait long. Turns out, it was Toby who did it. He didn’t like how Desna disrespected Uncle Daddy. According to Toby, she made Uncle Daddy feel like a minority in his own country. I expected better from Toby. However, it did make sense he would try and hurt Desna in such a manner.

Claws offered an explosive season 3 premiere, complete with a musical number, and I can’t wait to see what happens next!