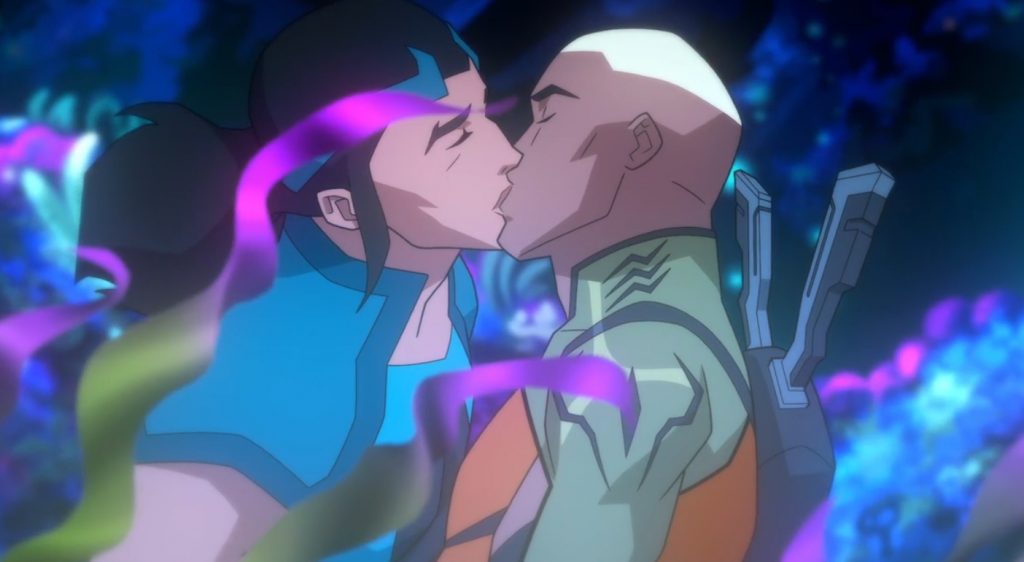 Even though I stopped watching Young Justice a long time ago, I’m glad the animated series Young Justice: Outsiders finally made it obvious to everyone that Kaldur (the new Aquaman) isn’t straight. He even got to share a kiss with his boyfriend during the latest episode.

Kaldur has been through a lot during the time between seasons 2 and 3 of Young Justice. Due to Aquaman (King Orin) leaving the Justice League to rule Atlantis, Kaldur took up the famous name. Other than that, his previous love interest (Tula) died, and he got to know his father was the villainous Black Manta. His most recent mission with his teammates also hadn’t gone smoothly.

Anyway, during episode 20, titled “Quiet Conversations,” we saw Kaldur take a new meta-teen girl to Atlantis. In the final seconds of the episode, Kaldur kissed a young Atlantean. Leave a comment if you all know who Kaldur’s boyfriend is.

I’ve been waiting for such a moment ever since the new Aquaman came out as gay in the comic books. It was about time the animated series followed suit.

As for Kaldur (from the animated series) being completely gay like his comic book counterpart, I’m not sure. However, the point remains he isn’t straight. That’s a huge step to take for queer representation in a superhero animated series.

Greg Weisman took to Twitter to explain the situation a bit. While there are certain fans who feel Weisman should have sensitivity readers to go over the scripts and that he should know about Kaldur’s definite sexuality, as far as my opinion goes, the Young Justice team gets points for taking such a step.

The third season of this show debuted back on January 1, 2019. A fourth season is in the works.

The current season also introduced a new character named Halo who is supposed to be queer, too.

Previous:“The Death and Return of Superman” Complete Film Collection Releasing This October!
Next: “Portal Knights MMO” Has Been Announced!