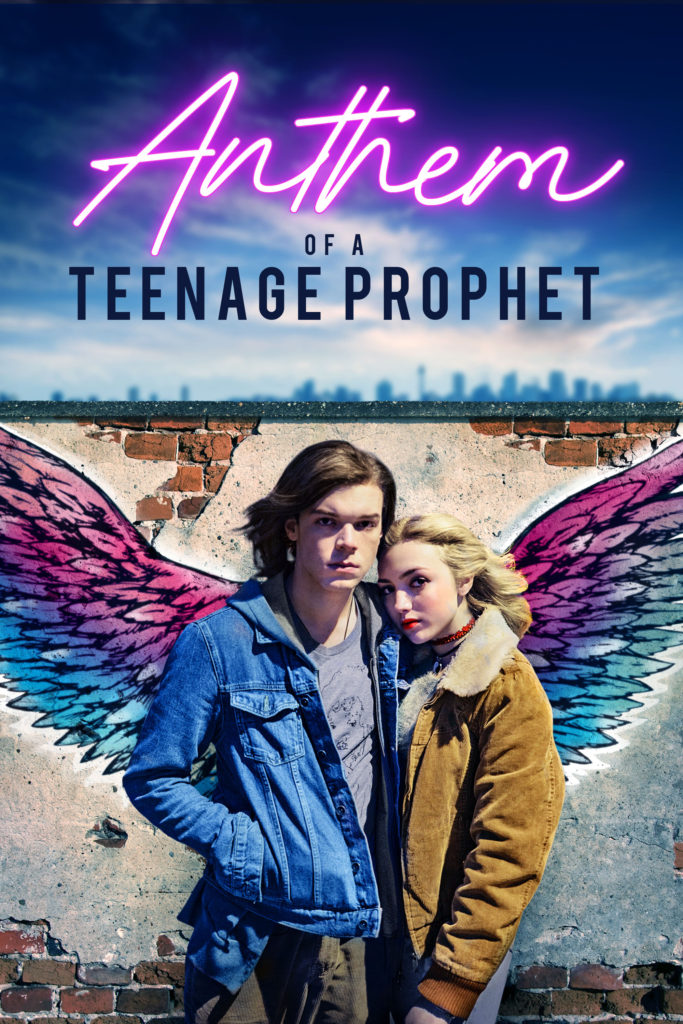 Certain issues aside, I enjoyed watching Anthem of a Teenage Prophet as it took me on a journey following a teen who can predict death.

I was provided an online screener for Anthem of a Teenage Prophet for review. The opinions are my own.

Even if you aren’t a fan of Gotham or Shameless, you have to admit Cameron Monaghan is a very versatile actor. I am looking forward to his growth. And even though I would have liked more explanation about his ability to predict death in this film, Monaghan does an impressive job as Luke.

It isn’t easy being a teenager. Add to that having the power to see upcoming deaths while thinking you might have something to do with causing them is a lot for anyone to shoulder. I haven’t read the book this film is based on. So, I don’t know how much of Luke’s characterization was cut or changed. However, I liked seeing what Monaghan displayed onscreen.

Directed by first-time feature director Robin Lea Hays and produced by Sepia Films’ Tina Pehme and Kim Roberts, ANTHEM OF A TEENAGE PROPHET follows Luke (Cameron Monaghan), a teenager who foresees the death of his best friend. When this premonition becomes reality, Luke must deal with the trials and tribulations of being dubbed “The Prophet of Death” and being titled a freak by the entire town. It doesn’t help that he’s fallen in love with Faith (played by Peyton List), his best friend’s girlfriend. Academy award-nominee Juliette Lewis also stars as Mary Hunter, an intuitive mother whose wisdom, grace and humor helps her teenage son Luke navigate the unique challenges of his world.

Based on the award-winning novel by Joanne Proulx set in Stokum Michigan in 1997, Anthem expertly navigates that often rocky and at times inspiring road to adulthood. The film authentically balances the teenage experience of confusion, angst and desperation and with those exceptional moments of clarity, self-discovery, humor and hope. Anthem explores the need to belong, the isolation of youth, and the powerful brew of fear, truth and music and noise that plays inside us all.

The rest of the cast also does a commendable job. For me, the best performances were delivered by Juliette Lewis as Luke’s mother and Grayson Gabriel as Fang. As soon as the film began you could tell something happened between Luke and Fang to make them drift apart. Turns out, Fang has been dealing with being queer and it was refreshing to see Luke reach out to him. There isn’t a lot of media showing queer men having straight male friends. More of that, please!

As for Peyton List as Faith, I’m not sure how healthy it is to have a relationship with the girlfriend of your dead friend, but List and Monaghan did convey a lot of chemistry. Also, people coming closer due to the loss of a loved one is something that happens. So, I can understand Faith and Luke being together during such a time.

Set in the ’90s, I appreciated how the film was directed, the settings chosen, the costumes, and the score. Peyton List performs an original song, too. The runtime is good. Considering this is Hays’ first feature film as director, I am impressed.

The issues I have with Anthem of a Teenage Prophet deal with the writing. Luke’s abilities aren’t explored. I would have liked to know more about his maternal uncle and how it connected to what Luke was experiencing.

Furthermore, I don’t know if a scene was cut during editing, but I was expecting something to happen when Luke kicked away the box Fang left for him. Did Luke or his parents not notice the contents in the morning? The items meant a lot to Fang and seeing them being ignored didn’t feel right to me.

Anthem of a Teenage Prophet will release in theaters and on-demand on January 11, 2019, with the DVD release following on February 5, 2019.

It has certain writing issues, but I still enjoyed it immensely due to the pacing and the impressive cast.

Previous:Wednesday Webcomics: Nothing Special Is So Cute I Can’t Stand It