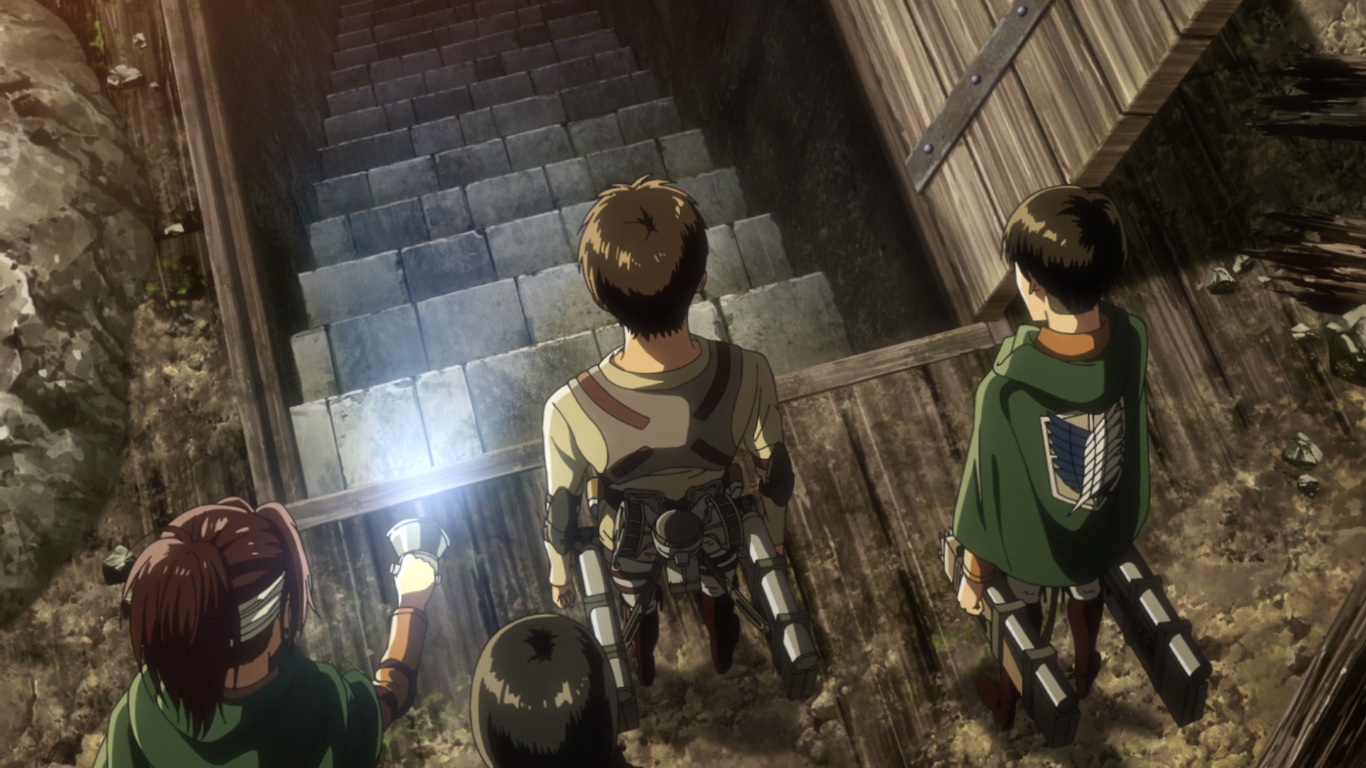 After last week‘s lack of an OP to highlight the somber tone of the episode, “The Basement” went straight into the OP without a cold open, quite possibly to hype you up for the reveal three seasons and something like six years in the making. At last, after countless struggles, we have reached the Yeager basement. This is the Prince-That-Was-Promised of the Attack on Titan world, except we actually got it. 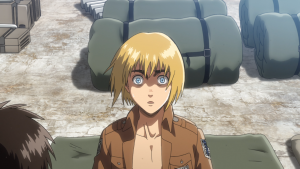 Granted, we didn’t get it right away. Because in some shows, actions actually have consequences, poor Armin has to deal with the knowledge that they saved him instead of Erwin, and that he is now a Titan shifter and sort of ate Bertholdt. Obviously, Armin has trouble dealing with this information, and falters under the weight of expectations. Luckily Hange is there to remind him that she, too, has some big shoes to fill.

I thought Eren’s and Mikasa’s flashbacks to their youth in Shinganshina were masterfully done. The colors bleeding over the ruins gave the scenes a surrealistic quality and made everything look idyllic.

And I’ll admit, for a few seconds there when the key didn’t fit, I thought I was in for the world’s biggest fakeout. All of those references, all that planning, and the key doesn’t even fit in the lock. But then Levi just kicked down the door and save us from, like, three episodes of filler. 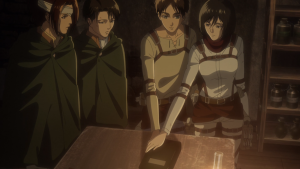 But we know now. We know what’s in the basement. And it’s bigger than I expected. Now it makes sense how Beast Titan knew terms like “perfect game” and “pitch”. We knew there were people outside the walls, as that’s where Ymir comes from, but that the two societies are so vastly different technologically is just astounding. It wasn’t until they held up the photograph from the book and no one could recognize it for what it was that I realized just how far behind the civilization inside the walls is. There was a zeppelin! An actual zeppelin!

Now that we know this… What is this all for? What happened a hundred years ago and why is such a small portion of the population trapped behind the walls? Are they trapped? Who made the Titans? Why?

We thought the basement was the end of the mystery when in reality it’s only the beginning.

Have you seen “The Basement”? What did you think?