Ellen DeGeneres Wants Kevin Hart to Host the 2019 Oscars! But Why Him? 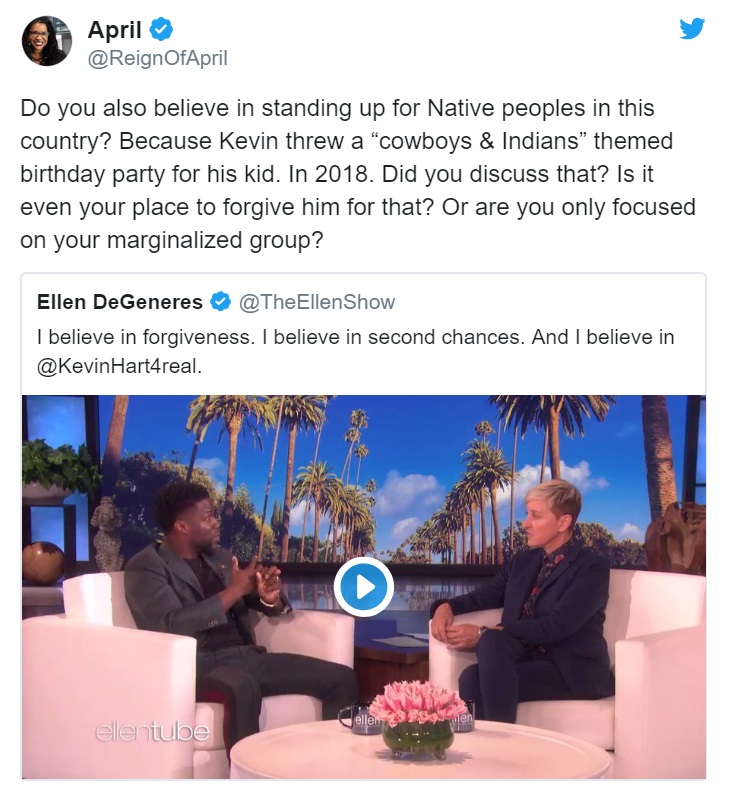 When Kevin Hart was announced as the host for the 2019 Oscars, his old homophobic tweets resurfaced which led to an understandable outcry and Hart deciding to step down from the hosting gig. However, his latest interview with Ellen DeGeneres seems to show the Academy still wants him for the job and Hart is on a ‘not-really-sorry’ PR cleanup tour.

I have watched Kevin Hart’s interview with Ellen DeGeneres and I have to say I found it very uncomfortable. It was as if DeGeneres had Hart on to give him a platform to say what he wanted without holding him accountable for what he said. As the interview progressed, Hart decided to play the victim card, and frankly, I kind of tuned out after that.

Regardless of someone deciding to dig up his old tweets as an attack or not, the fact is he put those tweets out in public due to his weird and hateful sense of humor. And painting the members of the LGBTQ+ community who were vocal during the backlash as mere haters and trolls was very dismissive.

Also, I see people saying he has apologized continuously for his past tweets. However, they fail to give actual sources showcasing his apology. The only actual apology I have seen from Hart are the tweets he sent out back in December. But even those don’t hold up anymore because during the interview he basically said he is sorry if people were offended by what he tweeted instead of taking responsibility for his words.

And yes, I understand it is a good thing to forgive and forget. But as far as my opinion goes, apologizing for something doesn’t mean you have the right to get back what you lost because of your behavior. Also, no one is owed a second chance, especially if their actions haven’t shown their growth or remorse.

From where I stand, Hart’s apology doesn’t equate to him getting the 2019 Oscars hosting gig back.

Harts says he has apologized and has grown as a person. And you know what? Good for him! We should all grow for the better. But again, that doesn’t mean people, primarily from the LGBTQ+ community, want him as the host at this year’s Academy Awards and he should understand that.

Furthermore, certain people have not taken kindly to DeGeneres supporting Hart in such a manner and coming across as someone who has the power to forgive Hart on behalf of the LGBTQ+ community.

My thoughts on Ellen and this absolving of Kevin Hart. pic.twitter.com/tn7Amh6oDv

Even if we keep Hart’s homophobic tweets to the side, there is the issue of the theme he selected for his kid’s birthday party which was insensitive toward Native Americans.

Currently, I’m just baffled at the support Hart seems to be getting. Is the DeGeneres interview the first stop of a PR campaign with the end goal of the Academy asking Hart to come back?

Is there literally no other comedian of color worthy of hosting the Oscars? What is Whoopie Goldberg doing?

At this point, I wouldn’t mind Sandra Oh and Andy Samberg being asked to host after they’re done making us laugh during the 2019 Golden Globes ceremony on January 6, 2019.

Who do you think should host the Oscars 2019 ceremony? Feel free to share your thoughts with us.