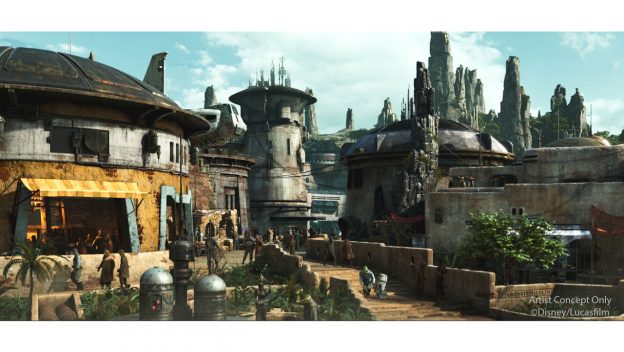 According to a recent interview, Disney CEO Bob Iger has announced that the new Star Wars themed land, Galaxy’s Edge, will open this upcoming June.

The new section of the park, as well as a similar themed section in Disney’s Hollywood Studios in Florida, were announced back in August 2015.  We’ve known they were both scheduled to be open sometime in 2019, but the exact opening date has been a tightly held secret.  All we had to go on was “summer” for Disneyland and “fall” for Hollywood Studios.  But now we can narrow it down a set of just 30 days instead of an entire season.

Barron’s: Do you still feel like you can bring more people through the parks, or is it more about growing ticket prices?

Iger: In some, you get more repeat visitation and increased length of stay because there’s more to do. You get more capacity. When Star Wars opens in Anaheim in June and in Florida later in the year, that’s adding capacity. You’re adding 14 acres of land [each], more rides, and more things for people to do.

This works out particularly well for me, as I attend San Diego Comic-Con every July.  San Diego is just a couple hours down the freeway and traveling between the two locations is fairly quick and easy.  Adding an extra day ahead of my annual convention trip seems like a pretty straightforward option this year.  And I’m certainly not going to be the only geek extending their California pilgrimage to see the new attractions.  I expect the park to be packed with fellow geeks in town for the con.

Galaxy’s Edge looks like it’s going to be a Star Wars fan’s dream.  There are two main attractions scheduled to be opened, Smuggler’s Run and Rise of the Resistance.  I’m sure lines for both will be incredibly long.  Way back in the day when Indiana Jones opened I distinctly recall waiting in line for almost four hours to ride it.  But honestly if I go and only get to do these two attractions, I’m totally fine with that.  Two years ago I spent the majority of my time exploring the Marvel attractions in California Adventure and it was totally worth it.

In addition to the two attractions noted above, there will be themed shops and restaurants, including Oga’s Cantina.  Oga’s will supposedly be serving alcohol, which will be a first for Disneyland.  California Adventure has been serving alcohol since it opened, but the original park has thus far remained booze free (except for the exclusive Club 33).  Disney security can be fairly strict against people causing a scene at the Happiest Place on Earth, so Drunk Disneyland may not be too wild.  But Moderately Buzzed Disneyland sounds like a fantastic summer adventure.

Previous:Ellen DeGeneres Wants Kevin Hart to Host the 2019 Oscars! But Why Him?
Next: Gotham 5×01 Review: Year Zero