So, I ended up watching Frozen 2, with the one the reasons behind my decision being finding out whether or not Disney finally did something with queer representation and Elsa. Well, I have some thoughts to share!

This article includes certain spoilers for Frozen 2. I’ve tried not to mention anything huge. But I do apologize if I did. Anyway, consider yourself warned.

The House of Mouse has been talked about a lot this year with regards to how the studio has continued to handle queer representation on the big screen. Marvel’s Captain Marvel film initiated an interesting conversation. Then we had that debacle with Avengers: Endgame featuring a gay character no one noticed. And now, we have Frozen 2.

Ever since Queen Elsa graced cinema screens around the world in 2013’s Frozen, certain audience members were quick to pick up on the queer subtext surrounding her character. The film gave us the ‘Let It Go’ (queer?) power anthem and the fact she didn’t have a romantic interest in the entire movie.

For people starving to see actual queer representation on the big screen from Disney (a company the LGBTQ+ community has always supported), such subtext was enough to brand Elsa as a member of the queer community.

Back in 2013, my opinion about Elsa was that she was canonically nothing as far as her sexuality’s concerned. So, I was interested in seeing where Disney would take her in the sequel.

Well, I’m kind of disappointed (yet not surprised) to share that Disney is still not courageous enough to take a strong step for our beautiful Snow Queen.

In Frozen 2, the studio has continued to not label Elsa’s sexuality. However, of course, the film does feature scenes that can play a part in someone interpreting Frozen 2 as having a lot of nods to the queer community.

The sequel is clear to show us that even while living in Arendelle, Elsa has continued to feel out of place. As the story progresses, a feminine voice calls out to Elsa. Her journey to make sense of her power and her family’s past allows her to embrace her true self.

She literally gets a new transformation complete with an outfit that’s inspired by a rainbow (specifically, the Northern Lights).

A rainbow is never just a rainbow when it comes to media. If you think that, then I can’t help you.

There’s also a small interaction between Elsa and a new character named Honeymaren. Apparently, the novelization of this story amped up their interaction’s queer subtext compared to what was featured in the film. 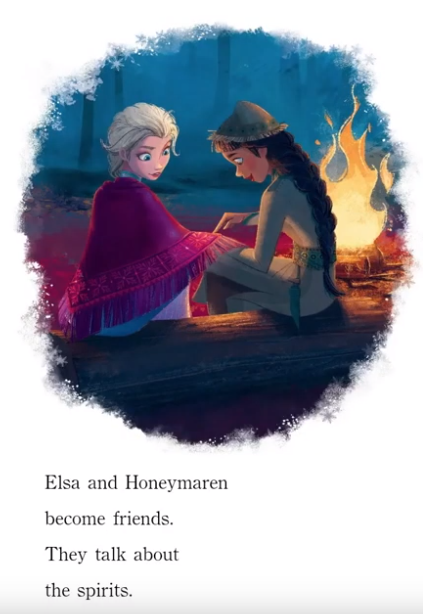 Not only that, Elsa is a magical being. And history has countless examples of homophobes connecting magic to sexual deviance (read, any sexuality other than being straight).

The film has Elsa (now fully embracing her magical self) standing up to her grandfather who is afraid of magic.

With such nods in Frozen 2, you can’t really blame the queer community for thinking that Elsa is indeed a member.

And for those who don’t want a character’s sexuality to be part of a kid’s film: do you all not realize your homophobia?

Your so-called arguments about sexuality needing to be erased in kid-centric content don’t hold when Anna and Kristoff are shown in a romantic relationship in the same movie.

Anyway, the point is, Disney’s Frozen franchise is perfect for being viewed through the queer lens.

And you know what? Disney knows that.

I never got queer nods from Moana or Merida (Brave). I think we can all agree that women wanting to be more independent and not having a love interest during a particular stage of their personal story doesn’t automatically make them queer. But if you think Disney added queer nods as far as Moana and Merida are concerned, then more power to you.

However, with Elsa, especially in Frozen 2, the queer nods felt more deliberate to me.

From 2013 to 2019, I have talked to many people I know (many of them ended up becoming parents) about their take on Elsa. Considering how, for a majority of Pakistanis, the sexuality spectrum only includes the L, G, and T, even they couldn’t help but think Elsa’s not completely straight. And I’m very excited to hear what they think of her after how she was handled in Frozen 2.

Again, as I said, the queer nods are quite deliberate. There deliberate in the sense that even certain non-US viewers are going to notice that something is up with Elsa.

But, unfortunately, I think the studio will continue to queerbait instead of making an official statement.

I wouldn’t be surprised if Elsa’s sexuality is never stated as long as this franchise exists because Disney wants to play both sides.

She’s queer enough for ceratin audience members to not be surprised if Elsa ends up with another woman in Frozen 10: Frozen Forever. Similarly, if Elsa ends up with another man in Frozen 3: Chilling Heteronomtivity, her subtextual queerness will still make sense because (big surprise) people can still be queer even if they marry someone of the opposite sex. And, in the same manner, she can still be queer if she doesn’t hook up with anyone at all.

I see what you’re doing Disney. I see you!