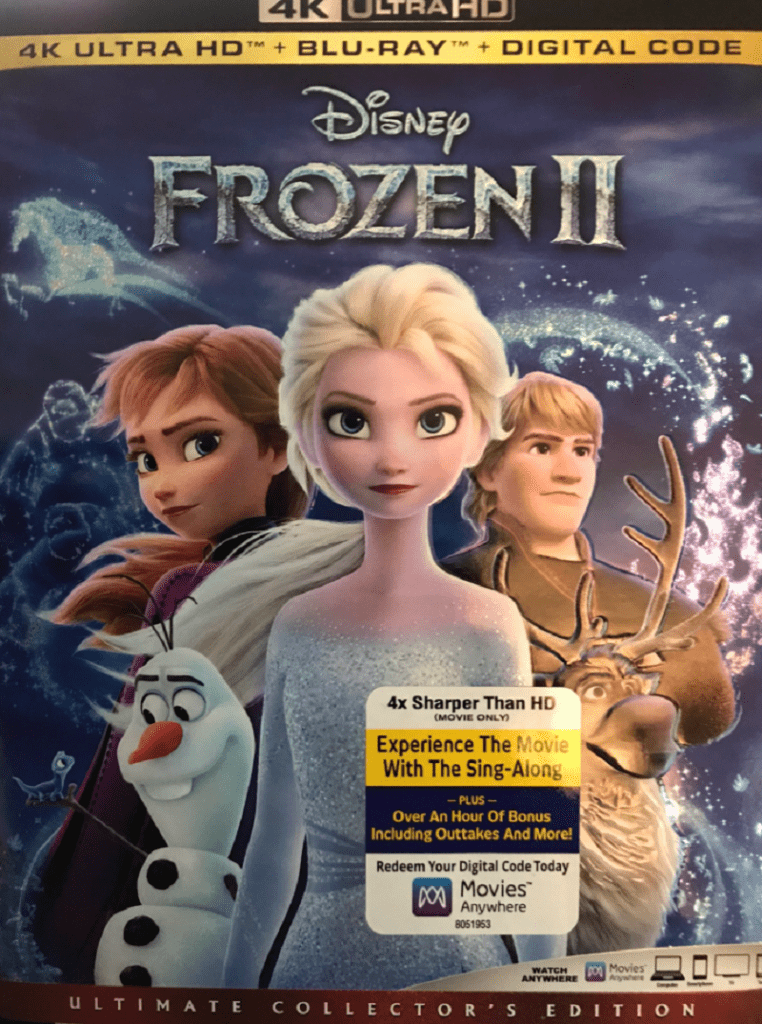 You can go ahead and purchase the Frozen 2 4K UHD, Blu-ray, and DVD home releases right now. Of course, these versions contain a lot of bonus content for fans to enjoy.

I was provided a free Frozen 2 4K UHD Combo Pack for review. The opinions shared in this article are my own.

When Disney released Frozen back in 2013, it took the world by storm. The animated feature quickly made Elsa and Anna into merchandise juggernauts. Everyone wanted a sequel, and after six years, Disney gave us Frozen 2 in 2019.

The sequel opened with a flashback to share a story Elsa and Anna’s father told them about the Enchanted Forest. Turns out, their grandfather, King Runeard, signed a treaty with the people of the Enchanted Forest. The King even made a dam in the forest as a gift. However, a fight between the two communities occurred and the spirits (earth, water, fire, and air) got angry. The spirits trapped everyone inside the forest, but Elsa and Anna’s father was able to escape.

The movie then jumped three years after the events of Frozen and we got to see a very uneasy Elsa trying to make sense of a voice calling out to her. The rest of the plot dealt with Elsa, Anna, Kristoff, Olaf, and Sven journeying to the Enchanted Forest to figure out what happened wrong all those years ago.

While there isn’t really much of a plot in Frozen 2, I enjoyed it focusing more on character development and opening doors for another installment. All of the main characters had certain stuff to address. Along with Elsa and Anna learning the truth behind Elsa’s powers, Elsa realized her purpose in life. Anna had to make a tough decision about setting the past right by making a huge sacrifice in the present. Kristoff didn’t necessarily have much to do, but I still liked seeing a fictional man demonstrating that it’s okay to be vulnerable. Olaf had to accept the fact the world’s changing (and growing older) around him.

There have been talks about the film having a message about climate change and how everyone should learn how to adapt to nature. Yes, I could see where such opinions came from. It also touched on how a person’s sense of entitlement, while being fearful of something they don’t understand, can cause a lot of harm.

As for the possible queer representation concerning Elsa, that’s a whole other topic.

Coming to the Frozen 2 4K UHD, Blu-ray, and DVD release, the visuals are stunning! You will be able to see every freckle on Anna’s face and every intricate pattern on Elsa’s clothes. The animation team really outdid themselves here. It’s incredible work!

I didn’t encounter any issues with the audio presentation. The dialogues were clear and the songs, especially ‘Into the Unknown’ and ‘Show Yourself’, were powerful. I could feel my sound system vibrate with each note.

One of the things I was looking forward to was the ton of extra content in this home release. And there really is a whole lot for fans to go through!

I would have liked a director’s commentary track, but I guess it might be released for the Disney+ streaming service (if said commentary exists)? Let’s see.

Also, according to the Press Release I got: 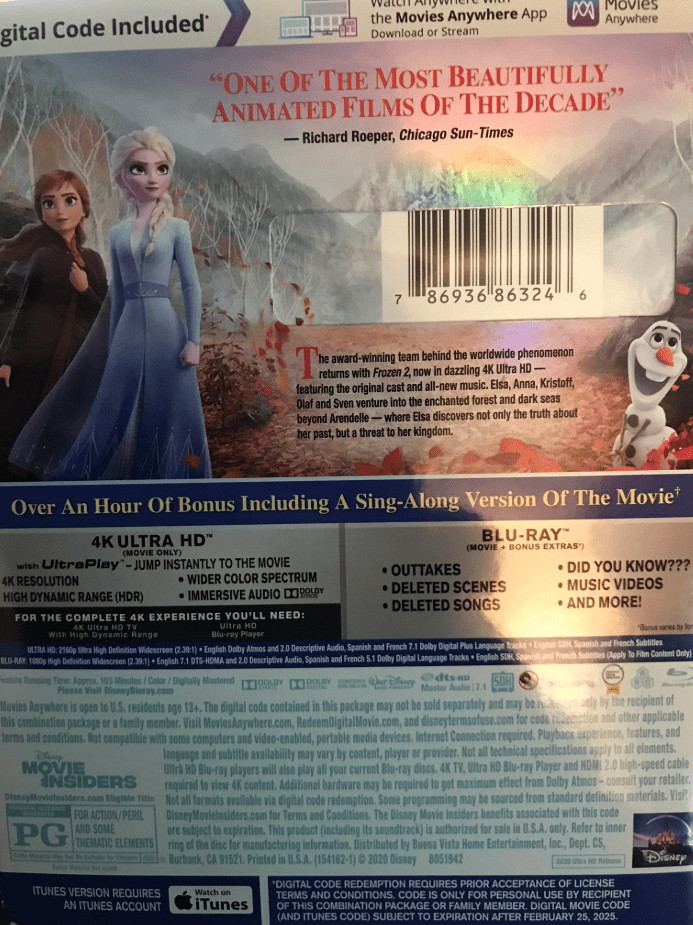 Frozen 2 has an approximate running time of 103 minutes. It has been rated PG in the US. The film has gone on to gross more than $1.4 billion at the global box office. With how things ended in the sequel, I wouldn’t mind getting another installment. Here’s to hoping we don’t have to wait another six years to get one, though.

All in all, the Frozen 2 4K UHD, Blu-ray, and DVD home releases offer a lot to fans. It’s a great way to rewatch the film due to the impressive visual and audio presentation. The list of extra bonus content justifies the price tag.

Previous:March Art Madness: An Interview with Previous Winners
Next: Heidi Klum and Tim Gunn Are Back in New Trailer For Amazon’s “Making the Cut”