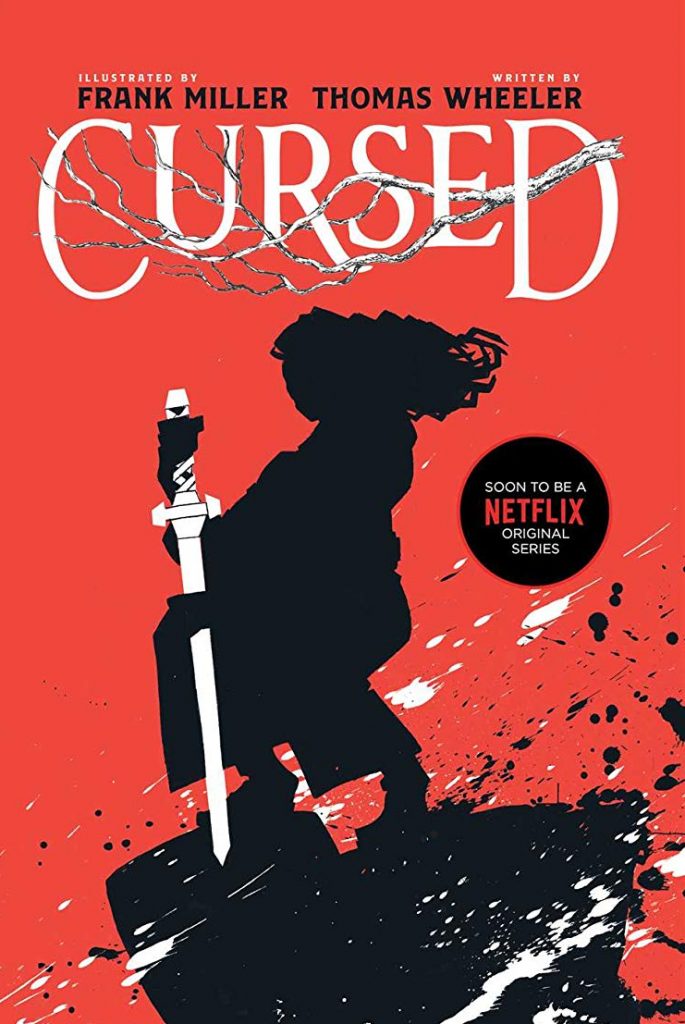 There have been many reimaginings of Arthurian legends over the years (we at The Geekiary are rather big fans of BBC’s Merlin), but none of them quite take the stance that Tom Wheeler and Frank Miller’s Cursed does. Optioned as a Netflix series (currently in production) before even being published, Cursed tells the story of Arthur from Nimue’s perspective.

When I heard about Cursed at this year’s Book Expo, I couldn’t help but be excited, because it sounded amazing – a retelling of Arthurian legend from the point of view of Nimue, peppered throughout by art in Frank Miller’s iconic style. Add to that the fact that it’s already going to be a Netflix series! I caught the panel at New York Comic Con earlier this month and my excitement grew after seeing the first stills from the series projected on the screen. And Daniel Sharman is in the show! Count me in!

Sadly, when I finally got around to reading the book, I was disappointed. While the plot is interesting, if a bit disjointed, and there are some rather creative ways of inserting traditional Arthurian characters into the story (Guinevere, in particular, though she shows up extremely late), on the whole, this book just falls flat. Perhaps my expectations were too high, or perhaps I’m too attached to other interpretations of this story, but I just couldn’t get into it. It just skimmed the surface of what it was capable of, never delving too much into the lore or the mythology of the characters it was portraying. For example, Nimue is Fey, and there are various tribes or species of Fey represented, but there isn’t a whole lot of explanation of their magic or how they came to be or how they’ve coexisted so long beside humans only for trouble to arise now.

Nimue as a main character is also lacking. From the cover art, from the description I was given of the book, it makes it sound as though Nimue is this great leader, and she’s not. There’s nothing wrong with that; sometimes the best leads are those who stumble blindly through the forest and accidentally end up doing something amazing. But Nimue is very one-dimensional, driven by the power of the sword and very rarely making her own decisions, instead being led by those around her. Arthur and Merlin are also not very developed, and Uther had a brief moment where he became interesting that lasted a few pages only and then he was back to being boring. Morgan, Lancelot, and Percival had potential but didn’t really get the chance to show it. The villains are stereoptyically, cartoonishly evil, and torture they inflict on the Fey (including children) is nauseating and extremely violent.

Learning that this was designed to be a television series makes a lot of sense. The author is a screenwriter, and the writing style is very basic and seems to be meant to only give you the bones of the story rather than the rest of it. It felt like there were gaps in the story between chapters, and sometimes it was difficult to tell whose head we were in, as there was a lot of bouncing back and forth. Also, I know Miller is one of the most well-known comic artists probably ever, but the art really wasn’t doing it for me. The art felt like it belonged with a completely different story. They didn’t complement each other very well at all.

Basically, Cursed is lackluster. I could deal with the cultural anacronysms if the world itself were fleshed out better, but there just isn’t enough magic in this traditionally mystical tale for me to forgive issues like the fact that burning witches is not really a thing that happened in Arthurian England. I could deal with the book’s treatment of female characters if Nimue herself were less, for lack of a better term, basic. Since this is obviously meant to be on television, I have much higher hopes for the series.

Cursed by Thomas Wheeler with illustrations by Frank Miller is published by Simon & Schuster Books for Young Readers and is currently available wherever books are sold. The Netflix series of the same name starring Katherine Langford will premiere in 2020.

Previous:“Boruto: Naruto Next Generations” 1×129 Review – ‘The Village Hidden in The Leaves’