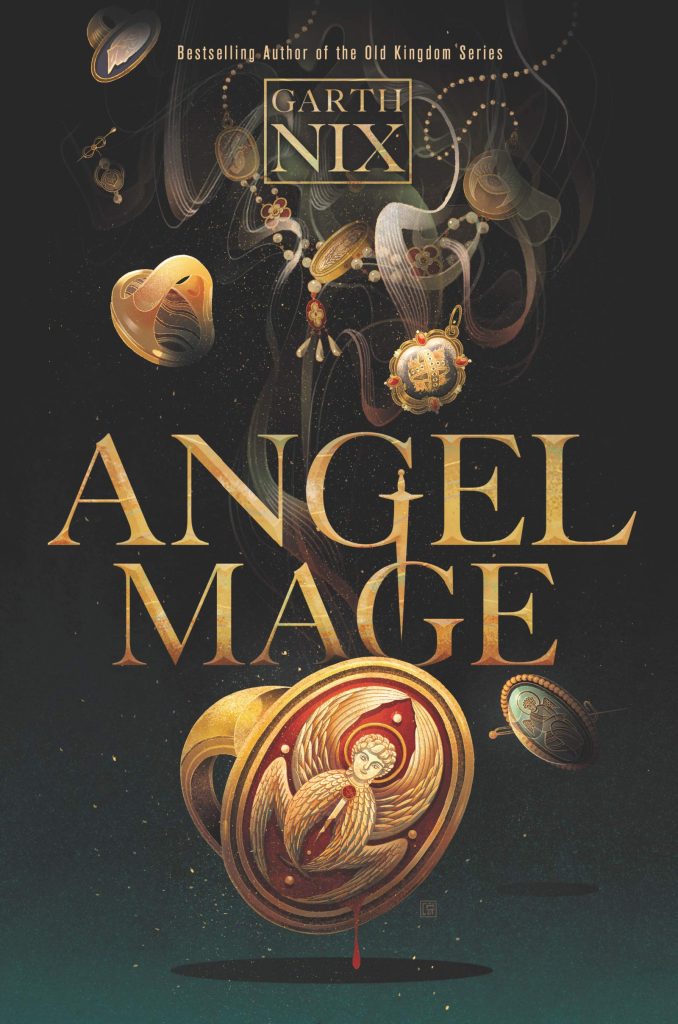 It has been over a hundred years since Ystara fell and Liliath, the angel mage, disappeared. Now, she has returned, looking not a day over the age of 19 and still able to wield the power of angels without suffering the consequences the way others do. She is ready to manipulate everyone to her purposes in order to reunite with Palleniel, the angel with whom she has fallen in love.

Despite the fact that I own a copy of Sabriel, Angel Mage is actually my introduction to Garth Nix. It’s a rather stellar introduction – a feminist, fantastical, magical reimagining of The Three Musketeers. In this alternate France called Sarance, power is split up between different groups who answer to various leaders. The ultimate ruler is the Queen, and there is a constant battle to have her ear. The Cardinal commands the angels on behalf of the country, and reporting directly to the Cardinal are Rochefort and the Pursuivants. D’Artagnan is the Captain of the Musketeers, while the Watch and the army just sort of exist. Fighting between groups is so bitter they must only drink at the tavern on specific days, so as to avoid brawling.

One of the most amazing things about this book is that the Cardinal, Rochefort, and D’Artagnan are all women. In fact, most of the important characters in this story are. And it isn’t a big deal, because it shouldn’t be. It’s nothing of note in this world that most of the powerful positions are held by women, because why shouldn’t they be? This is also a world where it seems that everyone’s sexualities can be labeled as “flexible.” Nothing is explicitly said in terms that we use, but it’s mentioned multiple times that several of the characters aren’t at all, shall we say, discerning when it comes to taking a romantic partner. Again, it’s nothing of note because it’s just the way it is.

Now, I enjoyed this story very much. The world Nix has created is richly described and quite easy to picture in your mind’s eye. The history is explained enough for you to be able to piece together what is going on. The audience has more information than the characters as to who Liliath is and what her ultimate plans are, but it’s still a fascinating journey to realize just how much Liliath has prepared for this and how well she manipulates everyone. You will probably spend much of the book desperately hoping for someone to cotton on to her schemes. I know I did.

My major issue is that, as this is a standalone, I feel that there is an excessive amount of buildup and not enough payoff. Angel Mage is over 500 pages, which allows for a wonderfully in-depth story that is magnificently crafted and planned, but most of those 500+ pages are laying the groundwork, with the climax starting in the last 50 or so pages and only leaving about 10 for the aftermath. In general, the pacing of the plot is rather well done; the ending isn’t rushed so much as anti-climactic. Once I got to the last page, I thought, “That’s it?”

It was also difficult to feel a connection to any of the characters. Nix’s style in this book is to jump back and forth between the characters, though we spend the most time probably in Liliath’s head. So while the characters are fairly well fleshed out, with enough features and flaws to distinguish them, and their motivations and backgrounds are all accounted for, I just didn’t particularly care about any of them. I was invested enough in the story to make up for it, but my attachment to the characters was clinical at best, and the only real emotion I felt for any of them was a burning desire for Liliath to get her comeuppance.

In short, this is a very well-written, engaging book. It is a standalone, though Nix has hinted that may change at some point, and I kind of hope it does. While I’m not particularly attached to any of the characters, the lore is so intriguing that I wouldn’t be opposed to more stories set in this world.

Angel Mage by Garth Nix is published by Katherine Tegen Books and is currently available wherever books are sold.