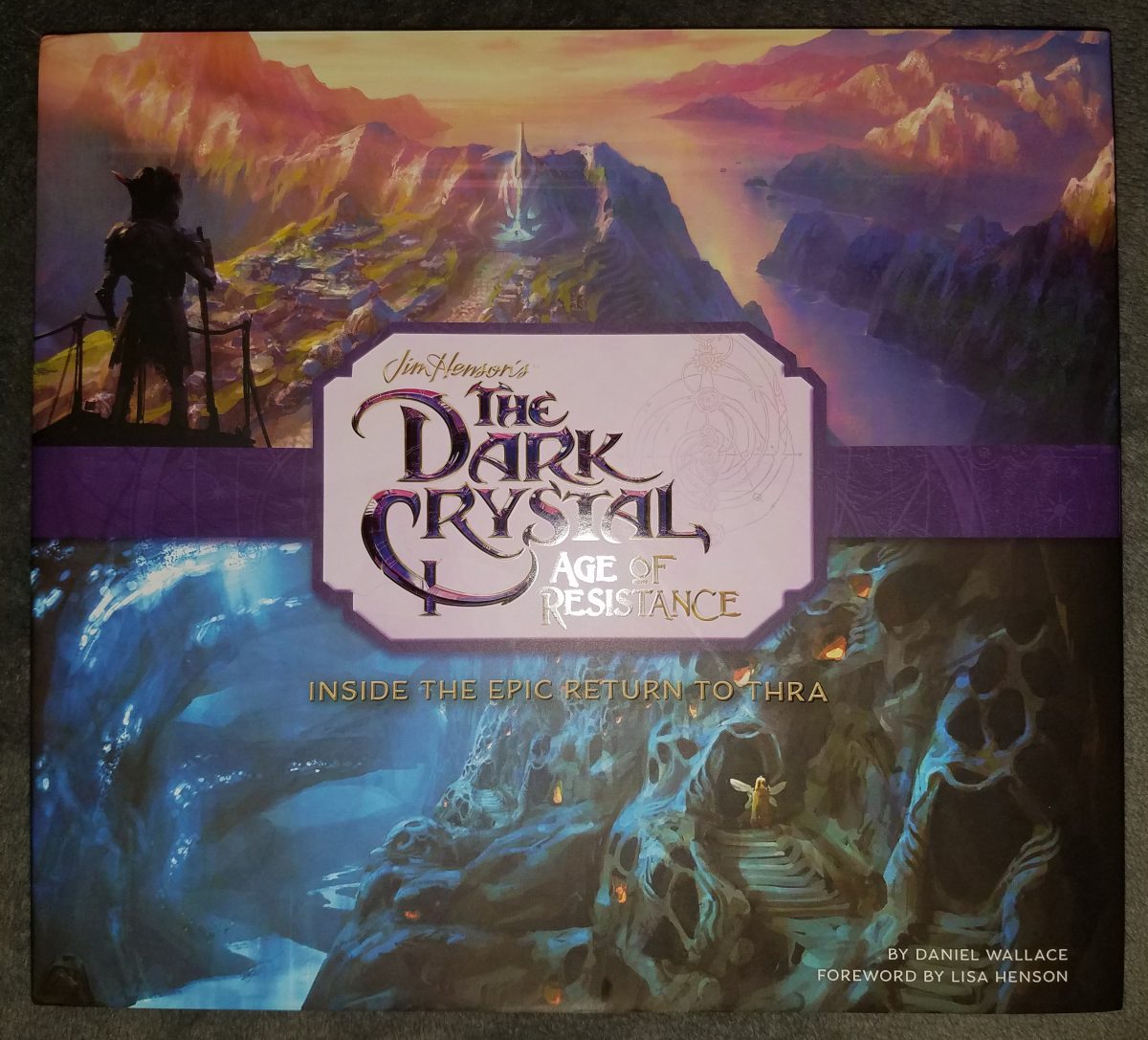 This book measures 10×11 inches and is almost a full inch thick.

For those of you who watched the making-of documentary on Age of Resistance and couldn’t help but want more, this book is for you. Inside the Epic Return to Thra is as epic as the title implies. This almost 200-page behemoth, published by Insight Editions, is full of as much wonder as the show itself. It’s 192 pages of concept art, behind-the-scenes photos, storyboards, and more as it details the insane amount of work that went into making the industrious, visionary series. It’s a deep dive, featuring exclusive interviews with the creative forces behind the show – the designers, the puppeteers, the voice cast, and more.

The book is divided into five sections (with a foreword by Lisa Henson and an afterword hinting at the possibility of a second season), breaking down the various aspects of building the show – the history, the narrative, the character design, the set design, etc. Each section is introduced with a gorgeous two-page layout with concept art (except for “Part IV: The Shapers of Thra”, which features a still of Aughra) related to the topic.

For the purposes of this review, I’m going to talk about my two favorite sections, which focused on character and set design. 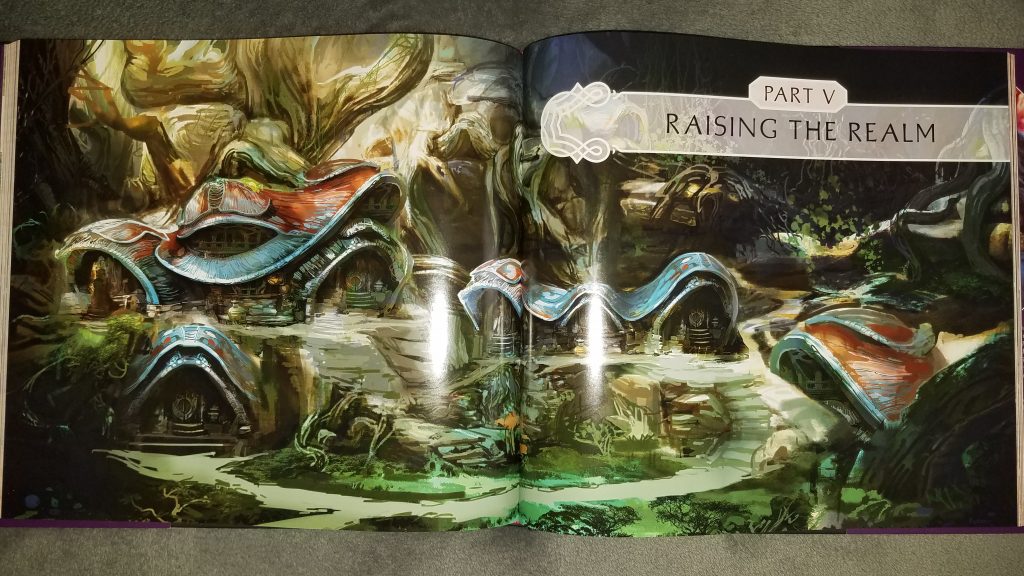 “Part V: Raising the Realm” talks about building the world of Thra.

My favorite section is probably “Part V: Raising the Realm”, which talks all about building the world itself – the various cities and sets and buildings. I love world-building; it’s always been my favorite part of writing and usually where I tend to get held up the most. (I have so much fun creating the world that I forget to tell the story.) It’s hard not to get caught up in the sheer mastery of skill involved in crafting Thra. I remember from the SDCC panel and press room that every detail was handmade, and it’s unbelievable seeing the behind-the-scenes photos of the process – the miniatures and the 3D-printed map and the multiple re-designs some of the buildings went through.

Anyone interested in set design, or any artists or illustrators out there, will find this section a helpful source of inspiration. (Writers, too! Can’t forget y’all.) Or you may just find yourself enamored with all the gorgeous pictures, the way that I was. 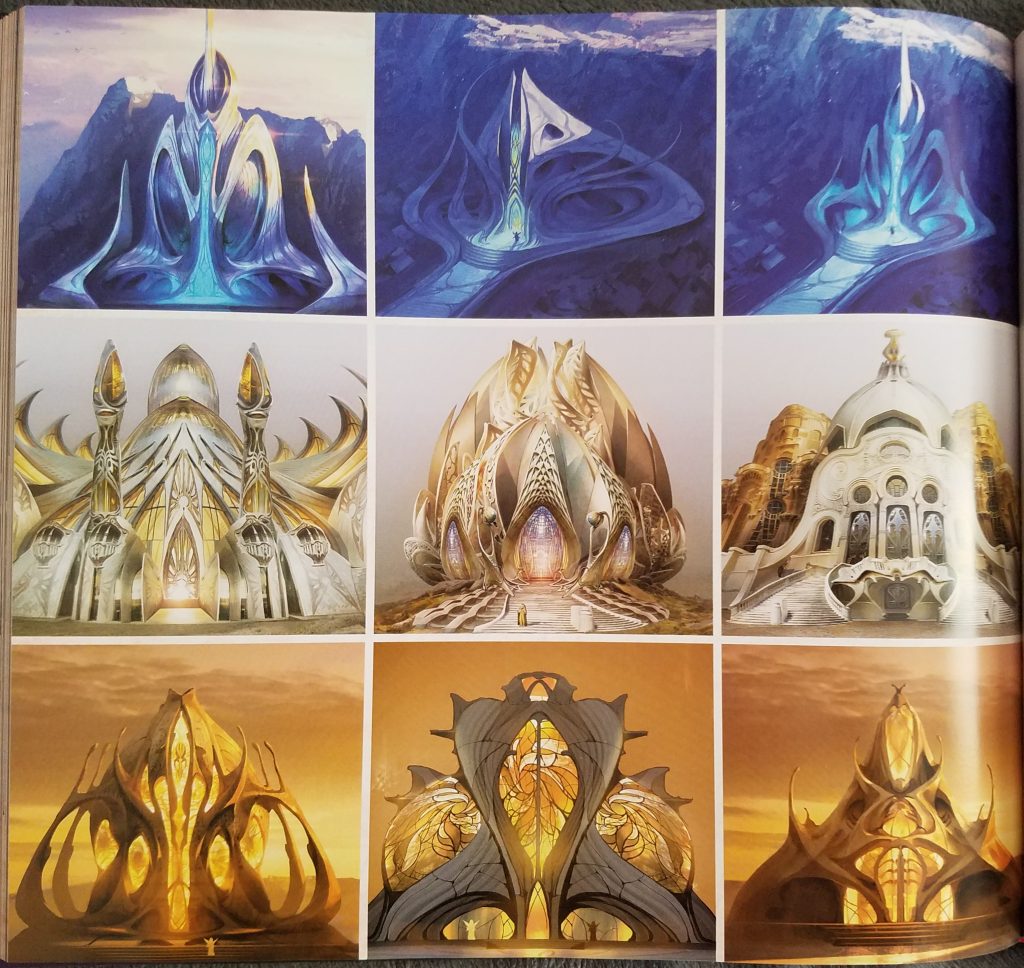 Concept work for the Ha’rar citadel.

In “Part IV: The Shapers of Thra”, each major character gets their own section – some longer than others – exploring how the creative team arrived on their appearance, personalities, and mannerisms. These sections are often accompanied by concept art, stills from the series, and sometimes even diagrams or storyboards. One of my absolute favorite images in the entire book is in this section – a two-page layout of photos showing every single page of Brea’s journal.

There is also a great explanation of the differences between the seven Gelfling clans, and what into making the looks so unique and identifiable, even for the Spriton clan, which is barely featured in the series at all. (Yet!)

Cosplayers and aspiring costume designers may want to spend some time poring over this section. 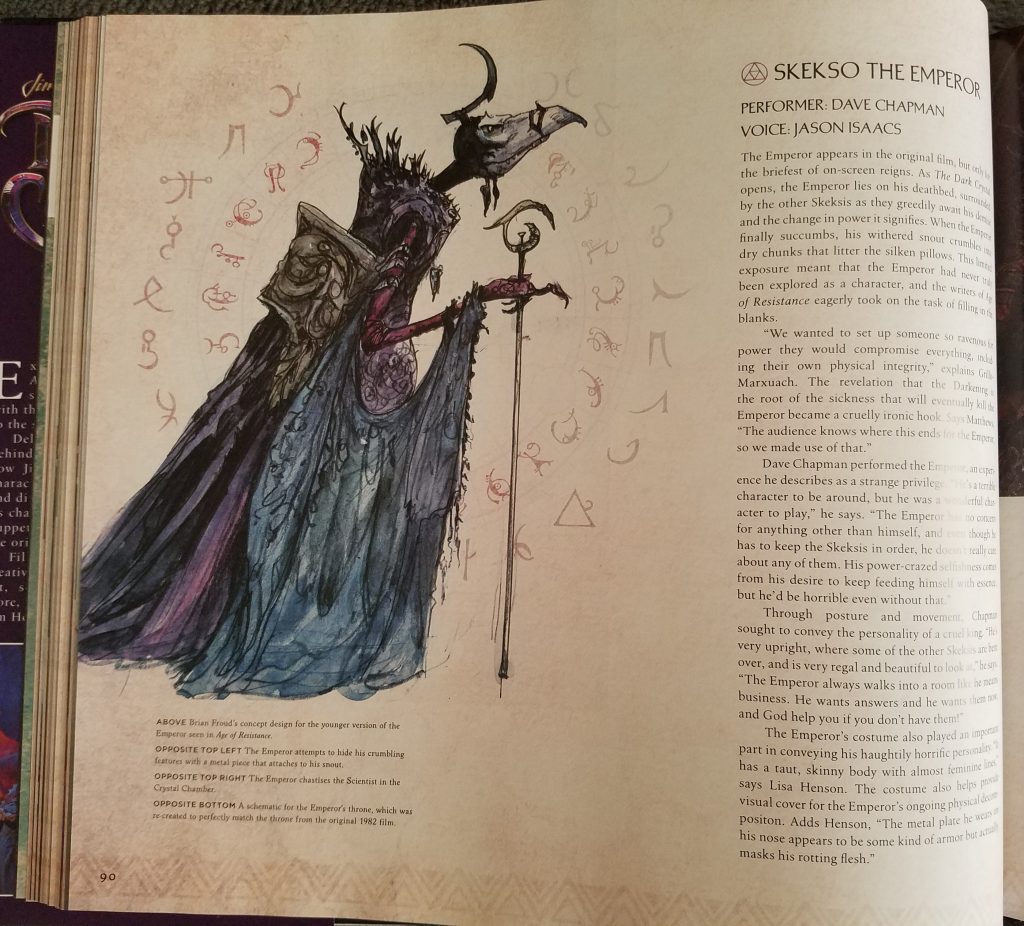 Section for Skekso (the Emperor). 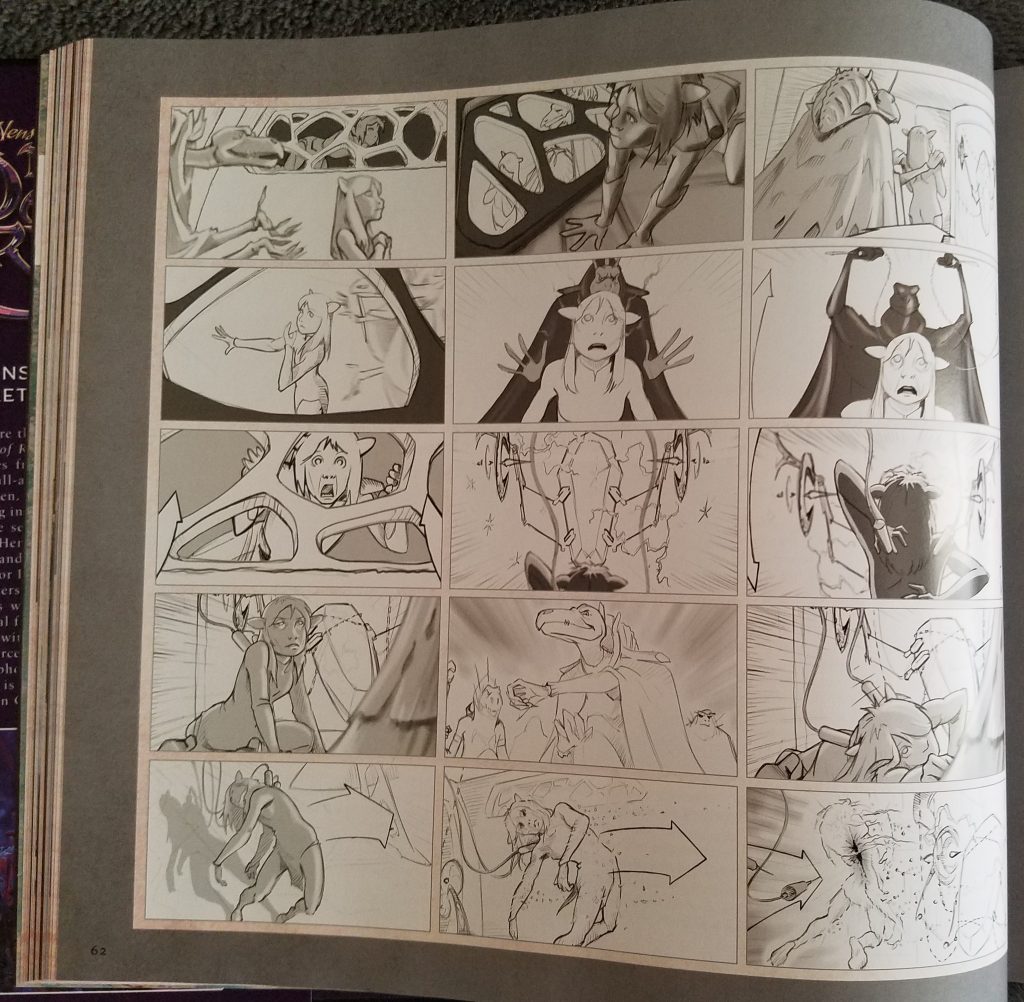 Storyboard of the scene where Rian watches the Skeksis drain Mira of her essence. 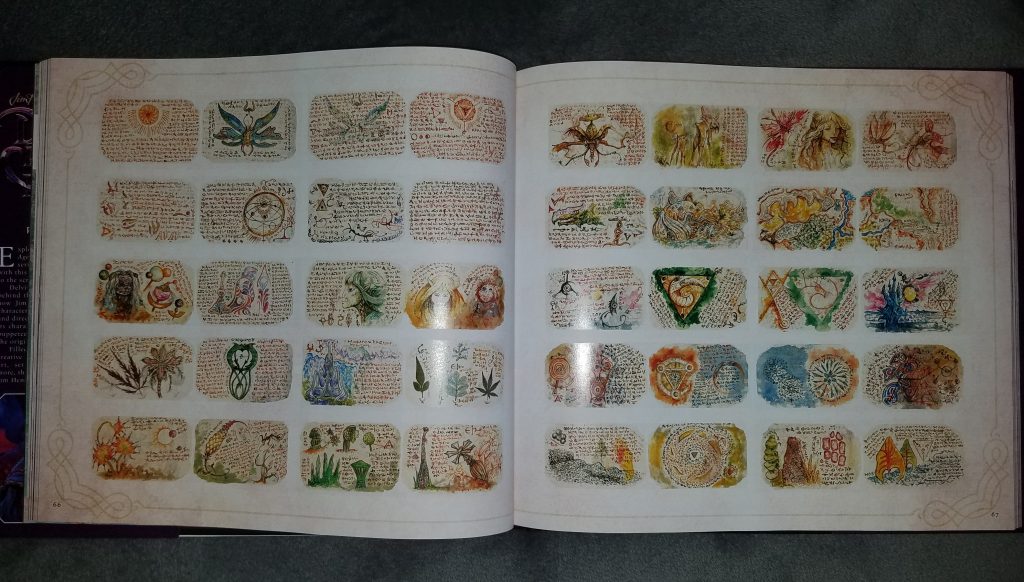 Remember in my review, how I mentioned that graphic designers created an entire language for the Skeksis that only existed on a few props? You get to see photos of those props – and a look at the written language – in the pages of this book. (I actually have a photo I could share, but come on, I can’t show you all the good stuff!)

Inside the Epic Return to Thra is a must-own for any fans of the series, but it’s not just that. Anyone interested in various aspects of filmmaking – costume design, set design, storyboarding, even puppetry – will want to get a copy of this book. You learn a lot of inside information from the creative team about all aspects of the work involved – for example, that it took three people to operate a single Skeksis – in addition to getting to see amazing images like the ones I’ve featured in this review. Honestly, the first time I read the book I didn’t even read it – I just flipped through and looked at all the pictures, and it still took me, like, an hour. It’s such an immersive look at the series, I got swept up in all the unbelievable details in every image.

Some people may blink at the price tag (it retails for $50 USD, $70 Canadian), but as a person who owns many books such as this, it is well worth the cost if you are a fan of the series. This book is a joy from start to finish and a perfect addition to the coffee table that I don’t have.

Inside the Epic Return to Thra by Daniel Wallace (with foreword by Lisa Henson) is published by Insight Editions. It will be available November 12 wherever books are sold.

*I was provided with a copy of Inside the Epic Return to Thra by the publisher in exchange for an honest review. All opinions are my own.*

Previous:ComiXology Original “Liebestrasse” Queer Romance in a Time of Fascism Releasing Tomorrow!
Next: Wednesday Webcomics: There Are 1001 Reasons to Love “The Wrath & the Dawn”