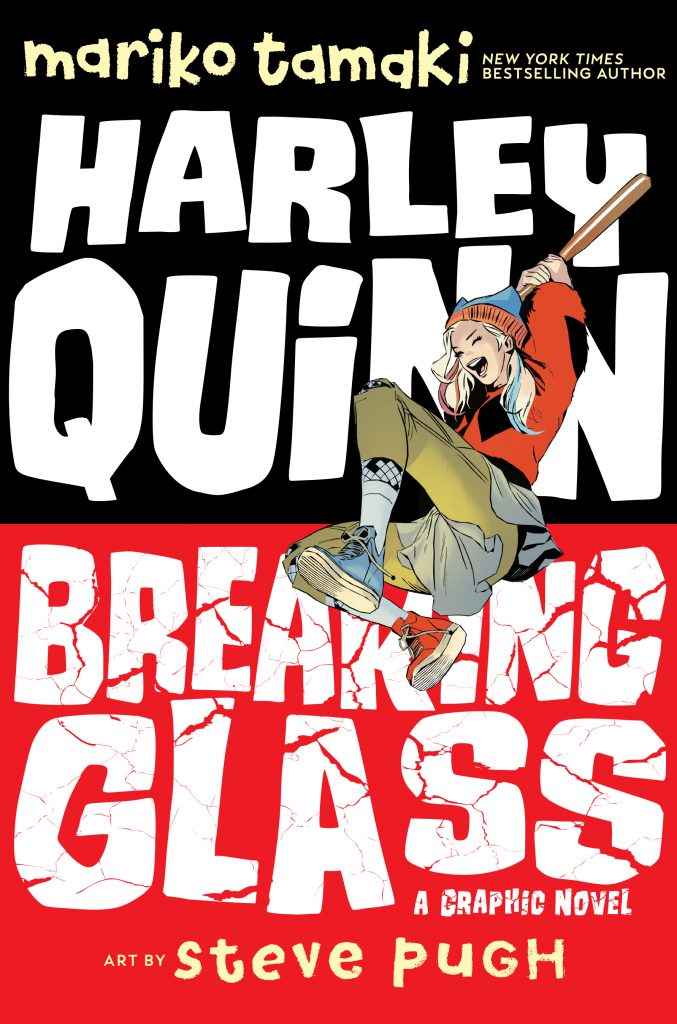 I haven’t been all that impressed with the offerings from DC’s new YA imprint, DC Ink. Using YA authors to reboot iconic characters as teenagers seems like a good idea in theory, but so far the titles have been hit or miss. I was not a fan of Mera: Tidebreaker or Under the Moon: A Catwoman Tale, but I did enjoy Teen Titans: Raven. And now I can add Harley Quinn: Breaking Glass as another tick in the “win” column.

Mariko Tamaki’s Harley Quinn: Breaking Glass reimagines the popular villainess as a down-on-her-luck teenager, sent to live with a grandmother that turns out to be dead. She is immediately adopted by the group of drag queens who live in her grandmother’s apartment building and attends Gotham High School, where she meets the activist Ivy, who teaches her about intersectionalism and environmentalism. But when Kane Enterprises starts having all the buildings in their neighborhood condemned in order to build their new condos, Harley decides to be a little more proactive.

One thing Tamaki nails is Harley’s voice and personality. She narrates the novel as though she is telling a fairy tale, and her tone and word choice are on point. I also appreciated how much agency Harley has in this; depictions of Harley can be problematic, but this is a portrayal I can get behind. I don’t know if I’d go so far as to call her a role model – what with the criminal activity and all – but she’s far more relatable in this book than in almost anything else I’ve seen her in. She wants to make a difference, and she’s fiercely loyal to her friends.

I wasn’t particularly a fan of Steve Pugh’s art style (I found the faces kind of creepy) but that’s a personal preference. I realize that I am in the vast minority on that point. I can acknowledge that it was very well drawn, the backgrounds are quite beautiful, the character designs are great (creepy faces notwithstanding), and the black/red/gray color palette works well with Harley’s style.

Honestly, the weakest thing about Breaking Glass is the Joker. You’ll most likely be able to predict his alter ego fairly quickly, and he’s far from compelling. He’s an amalgamation of every straight white male stereotype and is the most frustrating foil primarily for that reason. I have never liked the Joker, but he makes a good villain, and part of that is because of the chaos he creates. This Joker just seems like an entitled jackass. I am glad that Tamaki didn’t go the romance route with Harley and Joker, that Harley retains her agency by the end of the story.

This is a solid introduction to the character of Harley Quinn. It can be a little preachy at times, but it’s refreshing to encounter a story that deals with gentrification, an issue that many people are currently dealing with. I’m unsure if this is a standalone or if there will be more in the series, so I’m not sure whether or not to be annoyed by the open ending.

Harley Quinn: Breaking Glass by Mariko Tamaki and illustrated by Steve Pugh is published by DC Ink and is currently available wherever books are sold.