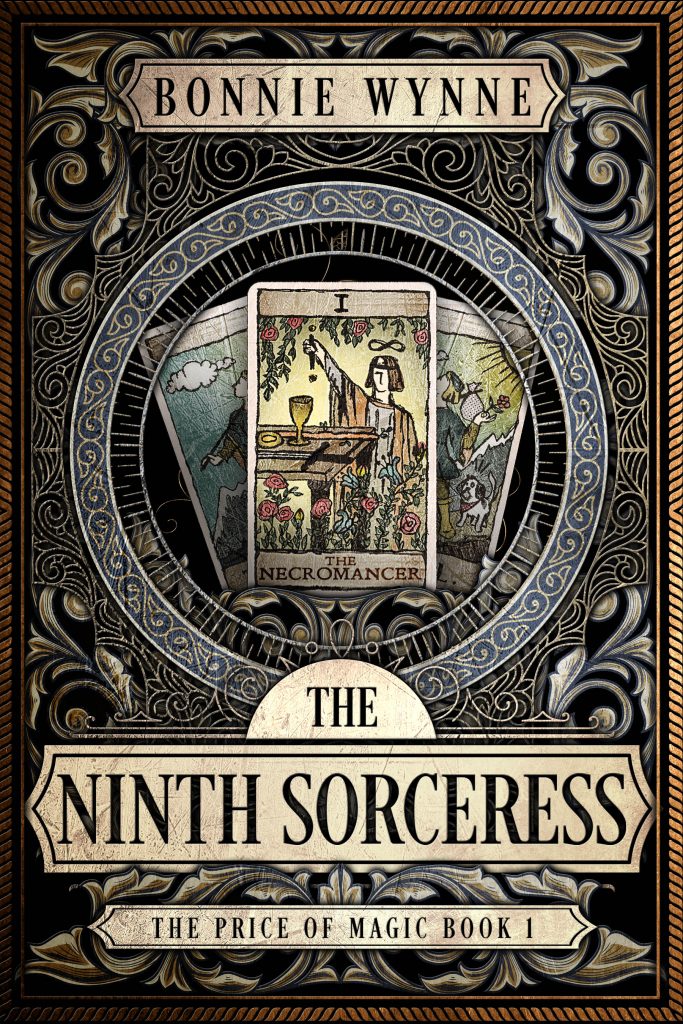 At its core, The Ninth Sorceress by Bonnie Wynne is a story about a teenage girl named Gwyn who thinks she’s ordinary, but it turns out she really is special. She’s hunted by a goddess she didn’t believe existed, has powers she’s always been afraid of, and there’s a war on the horizon she’s intimately involved with. And isn’t that what we all needed to read at seventeen years old?

I was provided a free copy of The Ninth Sorceress e-book for review. The opinions are my own.

I’ll admit that it took me a little while to really get invested in Gwyn as a main character. The bulk of the story is framed with a few interludes, where a sometime-in-the-future Gwyn is being held prisoner by wizards. They want information out of her that she refuses to give, but she is willing to tell her story to the man tasked with interviewing her.

I was into Gwyn here; despite being trapped in a prison, she was taking control of her circumstances as much as she could. She chose how much information to tell the wizard, she chose what to leave out, and she decided when to scare him (often).

The Gwyn in the bulk of the story was different — she was letting life happen to her without doing anything more than feeling upset at circumstances beyond her control. She let the adults in her life buffet her from place to place, scary situation to scary situation, letting all of them tell her what to do and when to do it.

I was getting frustrated with her. It was like the plot was happening to her and not the other way around. It wasn’t bad enough for me to stop reading, because I was loving the world and the magic system, but I was mentally begging Gwyn to make some of her own decisions. I finished the first part of the book (about halfway through) before I finally realized that she’s a seventeen-year-old girl, she’s afraid, and her whole world has been flipped upside down. Of course she’s not going to take her future into her own hands — she doesn’t know how yet.

Once I finally realized part of the story is her growing up and learning to take control of her own destiny, I was able to really enjoy the rest of the novel. Although the world itself seems large (there’s a map and everything, I love that), the cast of characters is pretty small, so I had ample opportunity to get to know each character as well as Gwyn would let me. I wouldn’t describe her as the most observant main character, so I had to guess at some character details.

There are only a handful of characters that Gwyn regularly interacts with: Alcide and Severine, siblings who seem to have very different reactions to Gwyn for no reason she can determine; Ascepis, her father-figure; Lucian, a shapeshifter with an awkward Scottish brogue who I assume (and hope a little) will be her love interest later in the trilogy; Idris, who mostly just mystifies her; and Faolan, who teaches her magic even though neither of them seem that into it.

I wish we’d been able to get to know the characters better. They feel like they should be main characters, but Gwyn is (understandably) more concerned with herself than with really getting to know these new people where we can see it. I know she spends time with Lucian because she tells us he visits her to chat, but we don’t get to see most of those chats. Our time is mostly spent trying to figure out the stuff she isn’t being told or, more often, learning magic.

Wynne has built a system of magic for The Ninth Sorceress that I’m a big fan of, and maybe that’s me being a nerd instead of a geek, but I love the detail she put into it. There are five schools of magic (if you count necromancy, which Gwyn’s teacher obviously does) and each school of magic has six individual signs students have to learn. Gwyn struggles with this — she’s not learning fast enough, her teacher doesn’t trust her enough — but this is how magic has always been taught. As far as the people around her are concerned, there’s no other way to do it.

Minor problems aside, I enjoyed this book overall. It’s something I would have read in one sitting at seventeen, and read in just three days more than a decade later. Gwyn’s backstory is interesting, her future is unclear but really tweaks my curiosity, and I’m dying to know how the rest of the world reacts to everything that happened over the course of this novel.

The Ninth Sorceress by Bonnie Wynne, the first book in her The Price of Magic trilogy, is published by the indie publishing house Talem Press and will be available February 13, 2020 in Australia at talempress.com, and internationally at Amazon.