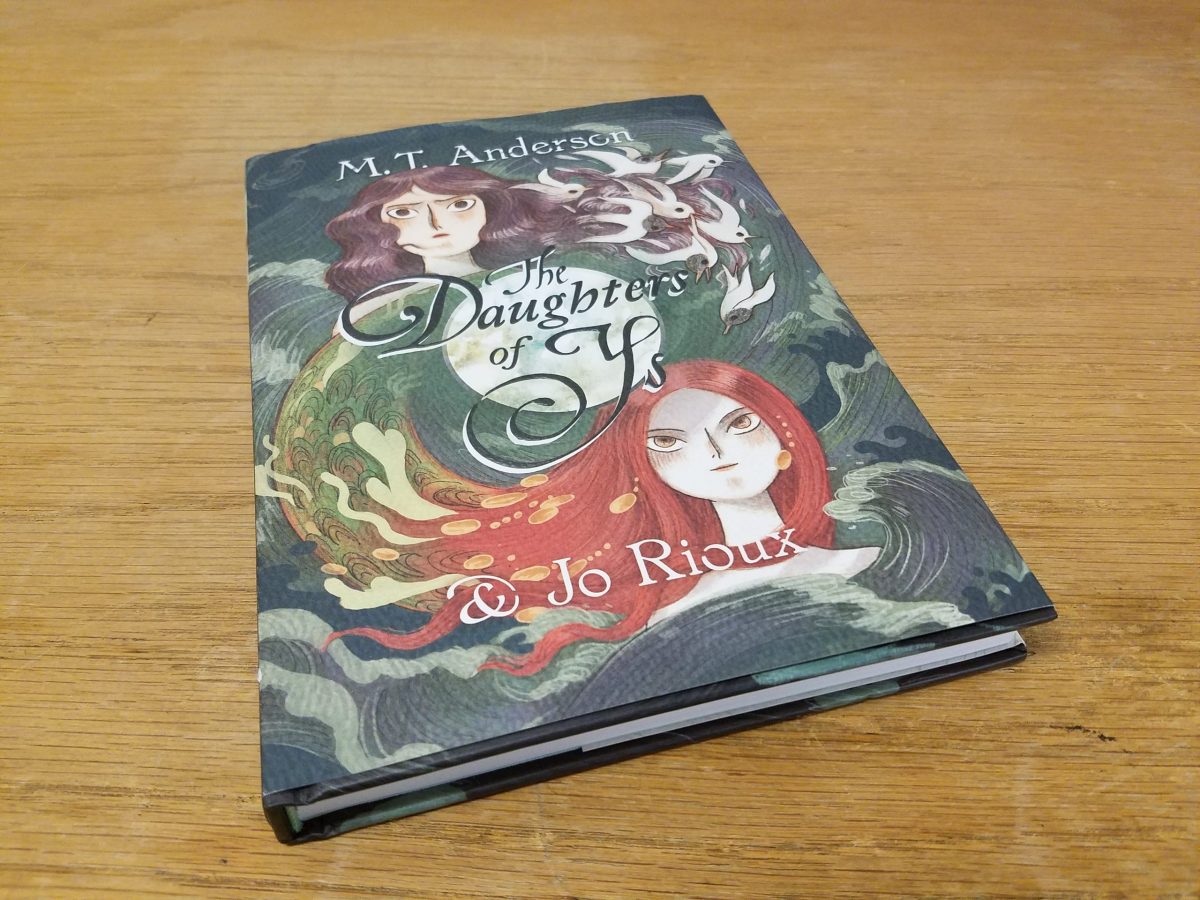 “For every enchantment, there is a price.” Two sisters, disillusioned with their father after their mother’s death, embark on very different destinies in The Daughters of Ys, written by M.T. Anderson and illustrated by Jo Rioux.

The Daughters of Ys is a retelling of a classic Breton folktale about the mythical city of Ys, which once sat upon the coast of Brittany but was swallowed by the ocean. In Anderson’s version, Ys is built by the magic of fae Queen Malgven; after her death, King Gradlon cannot deal with his grief, and his daughters, Rozenn and Dahut, strike out on different paths. Once very close, their bond is irrevocably shattered, and so they seal Ys’s doom.

From the cover, I was not expecting this to be as dark as it was. This is not a happy fairy tale to lift your spirits, which if I knew anything about the legend of Ys, I would have realized. The Daughters of Ys is dark and melancholy, both in content and in atmosphere – one of those stories where even those with “happy” endings aren’t really happy at the end. Nonetheless, it is a glorious, haunting tale of love, loss, grief, and the destructive power of secrets.

Rozenn and Dahut represent classic dichotomies in the portrayal of female characters. Sweet, innocent Rozenn, disgusted with the grand trappings of their majestic city, seeks a simpler life among the animals and people on the moors. Ambitious, calculating Dahut does whatever she must to ensure the survival of her city and her people, even though she is not heir to the throne. On the surface, this seems to be yet another story warning of the evils of sin, punishing women who have the gall to be cunning, ambitious, or sexual while rewarding those who lead chaste, honest lives.

However, while the original legend does clearly punish not just Dahut but everyone in Ys for her “wicked” ways, in Anderson’s tale, Dahut is simply fulfilling a contract that was started by her mother, in which the dark monsters of the sea serve at Dahut’s beck and call, but only if she pays them tribute. I think she takes what pleasure she can, but it is clearly not a joy for her to do these things, and she resents Rozenn for fleeing and leaving her to do all the dirty work.

That said, a key element of the story is the relationship between the two sisters, which I found to be sadly underdeveloped. Rozenn and Dahut spend much of the book apart, with Dahut bitter about Rozenn’s lack of concern for their kingdom and Rozenn bitter about Dahut’s seemingly selfish and shallow love for court intrigue. They interact only sparingly, and mostly once they’re fully grown. I think the story would have greatly benefited from detailing more about their childhood, or at least showing them together more often.

Rioux’s art masterfully complements the Celtic atmosphere of this story, with character designs that resemble old English tapestries and colors the invoke the sea. The use of color throughout is magnificent. It’s absolutely stunning – warm when the story calls for it and foreboding when it needs to be.

I devoured The Daughters of Ys. I could not put it down. I was captivated by the art and the story and ambiance. It’s beautiful and haunting and well worth a read.

The Daughters of Ys, written by M.T. Anderson and illustrated by Jo Rious, is published by First Second Books and will be available August 11 wherever books are sold.

*I received a free advance copy of The Daughters of Ys from the publisher in exchange for an honest review. All opinions are my own.*