Pride Reads: “The Gentleman’s Guide to Vice and Virtue” by Mackenzi Lee 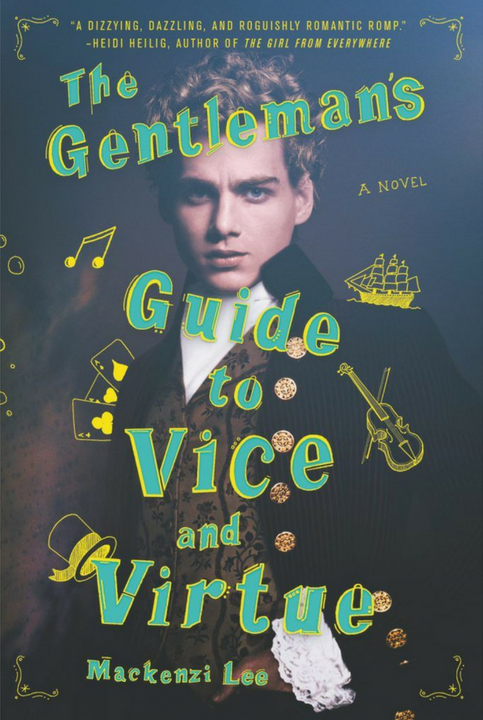 I knew a little bit about The Gentleman’s Guide to Vice and Virtue when I added it to my list of intended Pride Reads, but I was not expecting quite such an adventure-filled romp! It kind of gets ridiculous after a while, but it was a good time and a fun read.

The Gentleman’s Guide to Vice and Virtue is set in 18th century Europe and follows Henry “Monty” Montague, a 17-year-old member of the British aristocracy, as he gallivants across Europe on his Grand Tour with his best friend, Percy, and his sister, Felicity. Things go pear-shaped in Paris, when he steals a seemingly innocuous object from someone in the French government. Soon, the three of them find themselves with no money, on the run from a powerful man who wants them dead.

Monty as a narrator is self-absorbed, narcissistic, and blatantly unaware of his own privilege, especially when it comes to Felicity and Percy. He is also unapologetically bisexual in a time when that was a very dangerous thing to be. Pretty much every bad thing that happens to the three protagonists is directly a result of his impulsive, reckless behavior. He does grow, but some people may be turned off by him before he gets to that point.

Percy and Felicity, on the other hand, are two cinnamon rolls, too good for this world. Percy is a biracial epileptic, off on one last hurrah before being sent to an asylum for the rest of his life (unbeknownst to either Monty or Felicity). He also plays the fiddle, and though he plays it very little, that fiddle case sure comes in handy a lot. Felicity is bright and inquisitive, suffocating under the oppressive aristocratic lifestyle that denies her a proper education because of her sex. Neither of them are afraid to give Monty an earful when he starts acting like an ass.

Now, I said that it gets kind of ridiculous, and it does. It all starts when Monty swipes an ornate box from the Duke of Bourbon; he thinks it’s just a trinket, but it actually contains a powerful and highly sought-after object that could potentially cure any disease. Naturally, the Duke wants it back. Our main trio are set upon by highwaymen, robbed, flee to Spain, stowaway on a ship, get abducted by pirates… Basically, their simple European trip turns into a soap opera adventure where anything that can go wrong does. At some point I couldn’t help but stare down at the book and go, “Are you serious right now?” That said, I’ve read far more ridiculous things that were far less entertaining.

The Gentleman’s Guide to Vice and Virtue also features enough pining to drive you mad with it. Monty and Percy are both in love with each other and have been for some time, but neither knows how to make that leap, considering the consequences if they’re discovered. At times, it was difficult for me to understand just what exactly Percy saw in Monty, but that doesn’t make the pining any less endearing.

There are a lot of heavy topics touched upon in this book – gender, race, sexuality, disability, physical abuse – but it never comes across as preachy. It raises questions for which there are no easy answers. But it is, at heart, an adventure, and it’s a pretty good one at that.

The Gentleman’s Guide to Vice and Virtue by Mackenzi Lee is published by Katherine Tegen Books and is currently available wherever books are sold.