Pride Reads: “This Is Kind of an Epic Love Story” by Kacen Callender 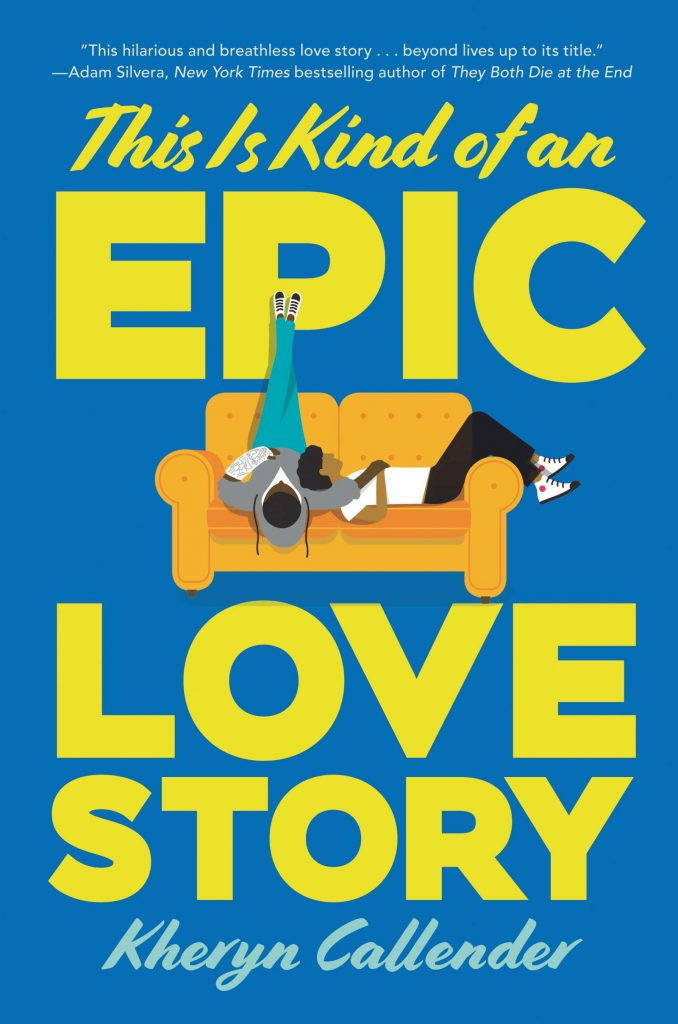 I had high hopes for This Is Kind of an Epic Love Story, primarily because with a title like that, it had better deliver. Unfortunately, this potentially cute rom-com-esque book was cut off at the knees by flat, frustrating characters and a lack of resolution.

I feel like I have to be honest here: I sometimes think that I need to relax my standards when it comes to books with LGBTQ+ protagonists. I want to support them because if you don’t read the books that are currently out there – even if you don’t like them – they may stop publishing them and we’ll never get better ones. But I don’t want to recommend a book that I didn’t like just because it’s LGBTQ+ and our options are limited. But then people have different standards and tastes and just because I didn’t like something doesn’t mean no one else will. Hence my dilemma with This Is Kind of an Epic Love Story by Kacen Callender.

From the summary on the back of the book, I was expecting a cute rom-com. Nate “doesn’t believe in happy endings” because he’s seen “too many relationships” (read: two) crash and burn, which is a terribly overdramatic and pessimistic outlook on life, but whatever, he’s a teenager. Flo, his best friend (and ex-girlfriend), is determined to hook him up with someone, and all of a sudden, his childhood best friend (and crush), Ollie, is back in his life. It can’t be a coincidence!

Sounds adorable, right? I waffle back and forth on the childhood-friends-to-lovers trope, because I hate it in television and movies (except for very rare cases) but I love it in fanfic for some reason. But this had the potential to be just a really sweet, fluffy read about a boy who is still hung up on his childhood crush. I very much liked the idea of it. I very much did not like its execution.

I could not connect with any of the characters. They were all very frustrating and kind of terrible people, and there was a general disrespect for relationships that really bothered me. Nate and Flo only recently broke up because she cheated on him with Lydia; he still has feelings for her and is lying about it, and she kind of strings him along throughout most of the book. When Ollie moves back to town, he has a boyfriend, and yet their friend Ashley still wants to make a move on him, even though she’s in love with their friend Gideon. And when Flo finds out that Nate likes Ollie, she encourages him to go for it, even though they know Ollie has a boyfriend. That’s just terrible. Never go after people in relationships, it shows a complete lack of respect for their feelings and wishes.

Nate as a main character is not very sympathetic. He makes so many 180s that I got dizzy reading, and he runs so hot and cold that I’m kind of surprised Ollie wanted anything to do with him at all. Plus, Nate’s hang-up of not believing in happy endings doesn’t make any sense considering he spends the first half of the book wanting to get back together with Flo. Flo is pushy and obnoxious and hypocritical, and their other two friends are afterthoughts with absolutely no development.

However, This Is Kind of an Epic Love Story is still an LGBTQ+ book. Nate and Flo are both openly bisexual, Ollie is (presumably) gay, and this is a world without homophobia because no one ever gives them crap for it. (Although to be fair, the only real characters in this book are Nate and his friends, his mother and sister, Ollie’s mother, and the dogs.) Not only is it a queer romance with queer main characters, it’s an interracial romance. Nate is black, Ollie is Hispanic, and Flo is biracial (black/Asian – I believe Taiwanese). Ollie is also deaf and often speaks in ASL, the motions of which are described in the book. I can appreciate the importance that a book like this exists even if I really disliked it.

As for the title, it’s actually explained in the book that a love story doesn’t need to be epic to be epic – that a relationship can be epic just by being normal and healthy. I think that’s a great attitude to have, especially because Nate’s whole deal is that he knows that love isn’t going to be like the movies. It doesn’t need to be like the movies. That’s the point. But at the same time, I think that if you’re going to call your book This Is Kind of an Epic Love Story, it should at least have a halfway decent relationship that is based on mutual trust and communication, which literally none of the relationships in this book are.

This Is Kind of an Epic Love Story by Kacen Callender is published by Balzer + Bray and is currently available wherever books are sold. (Note: This book was published under the author’s former name.)