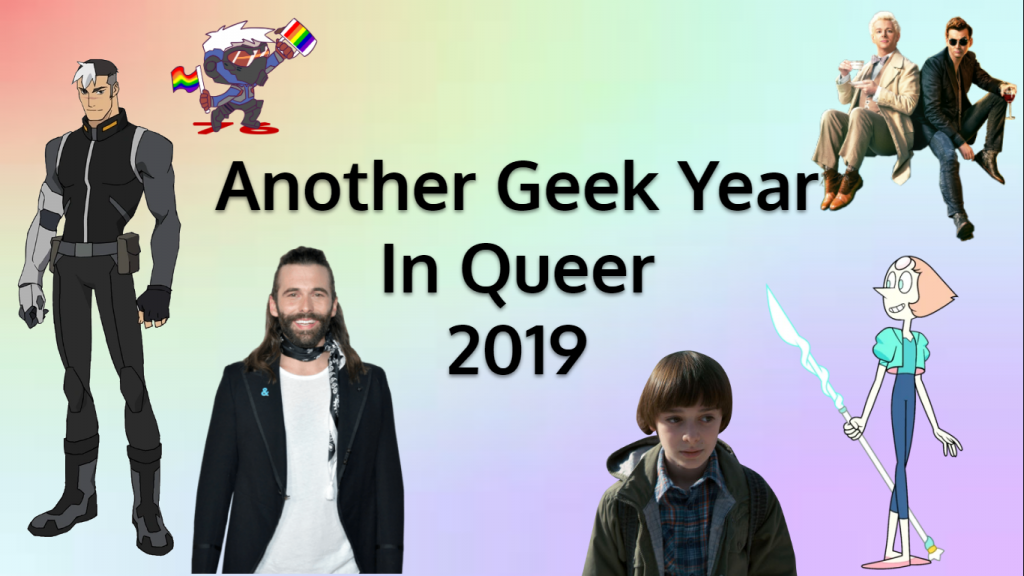 Another year of Comic Con Honolulu has past, and Another Geek Year in Queer panel has happened.

This year marks the second team up between Di and myself as we attempted to cover all the queer geek happenings over the past twelve months. There was so much, we barely had time for our usual Q&A at the end.  We’ll try to speed things along next year, we promise! Because talking to you all is one of our favorite parts.

A lot has changed over the past year.  Last year we excitedly reported that Voltron was adding LGBTQ+ representation, only to have all those hopes and dreams blow up.  We were also happy with The Magicians continued representation, but that had a major issue this year, too.  There was a lot of problems with things that felt fairly solid just twelve months ago.  Primarily the Buy Your Gays trope getting rammed into what was a fairly good chance at representation.  Can we stop that, please?

But it hasn’t all been a disappointment!  We highlighted Studio MAPPA, the studio behind Yuri on Ice! and Banana Fish.  It’s amazing to live in a time where an anime studio is so willing to bring us such quality LGBTQ+ content! We also talked about the incredible announcements regarding queer representation in the MCU (while making note that their first attempt sort of fell short). Good Omens brought some quality representation and Stranger Things also did fans a solid.  And, of course, there was Rocketman.  Overall, it’s been a great year for queer geeks, even if we can’t shake our unfortunate trope problem.

Branching out to general pop culture, we discussed Taylor Swift’s “You Need to Calm Down,” analyzing both sides of the debate regarding the video.  We also dipped our toes into the world of sports, fangirling over both Megan Rapinoe and figure skaters Karina Manta and Joe Johnson.  (Hey, sports fandom is still a fandom, and it got hecka queer this year!).

Basically? Queer stuff all around!

But enough talking about the panel!  Let’s watch it.  Buckle up because we have a solid hour of LGBTQ+ representation discussion!

Thank you to everyone that came out to our panel and we hope to see you all next year!  And we’ll try to make more room for Q&A next year as well.