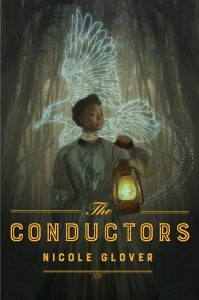 In an alternate Reconstruction era, Hetty and her husband Benjy, former conductors on the Underground Railroad, work together to solve a series of connected murders in Nicole Glover’s The Conductors.

I received an eARC of The Conductors from NetGalley and Houghton Mifflin Harcourt in exchange for an honest review. All opinions are my own.

The Conductors by Nicole Glover (out from Houghton Mifflin Harcourt on March 2, 2021) takes place in an alternate world where people practice magic. White people do sorcery, colonizer magic from Europe, using wands to cast spells. Black people practice celestial magic, which originated from Africa, drawing sigils of astrological signs to summon their power. These magic systems are segregated, and Black people caught doing sorcery are punished.

In this alternate history, white slave owners collar their Black slaves who practice or even teach sorcery. Hetty and her sister Esther escape from the South, only to be separated along the way. After joining and marrying Benjy and helping runaway slaves escape to the North, Hetty works as a seamstress in Pennsylvania, navigating the Black social circles in the city.

The Conductors isn’t centered on the trauma of Slavery. The magic systems are a part of everyday life, demonstrating the wielding of power and what it means for the user. Glover shows the intersectionality and perspectives of Black people post-Civil War. Among the supporting characters are Queer, Trans, disabled, working class, and higher class Black people. One character is white passing. The novel mostly focuses on the interpersonal relationships between Hetty, Benjy, and the people they know and encounter.

Hetty and Benjy work through their relationship while investigating the mystery behind the murders. The two are married, although for convenience, and they find themselves falling in love with each other as the story progresses. The relationships in this novel naturally culminate, and the characters come off as humans with their own flaws and desires.

As a reader, I find the mystery unpredictable. I thought I had the person behind the murders figured out, but then it turned out that it was the last character I’d expect. Glover knows how to keep her readers intrigued with her initially unnoticed hints.

The Conductors is a steadily paced murder mystery that takes unexpected turns. Glover’s atmospheric prose and clever storytelling will draw you in.