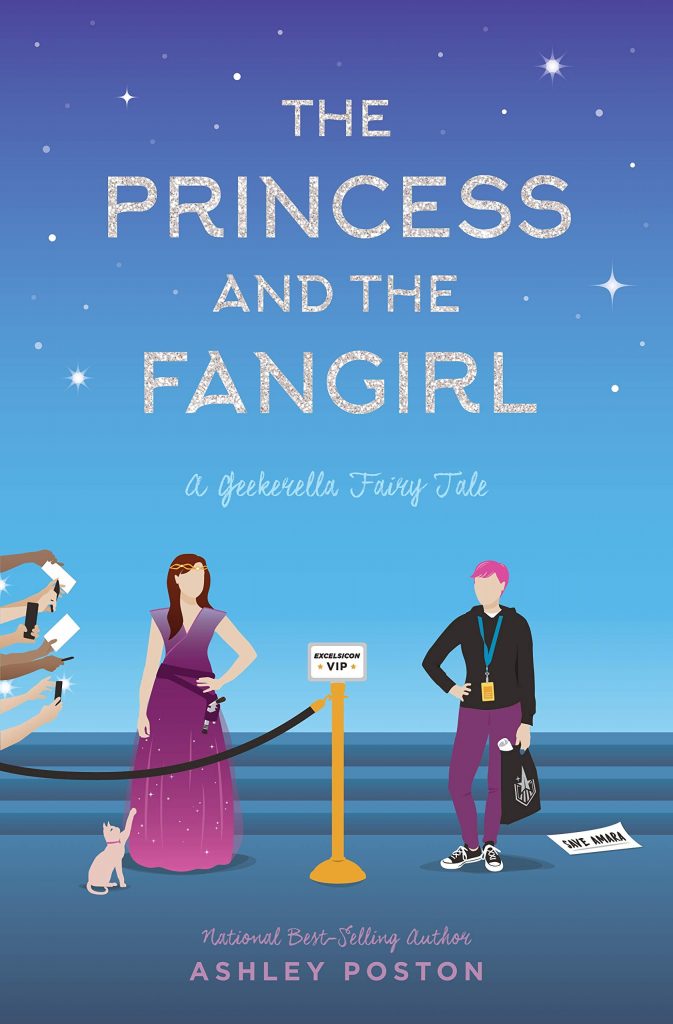 Return to ExcelsiCon in The Princess and the Fangirl. This modern-day geekified version of The Prince and the Pauper is a sequel to Ashley Poston’s Geekerella and has a similar charm and sense of whimsy.

While it isn’t necessary to have read Geekerella to read The Princess and the Fangirl, it will probably help, as one of the POV characters in this story is Jess, Darien’s co-star from the first book. Jess wants to be a “serious” actress and resents the popularity of Starfield. Her character, Amara, was killed at the end of the first movie, and she’s eager to return to films with more gravitas. But she is in a holding pattern as the studio waffles about bringing her character back. The “pauper” in this tale is Imogen, the founder of the #SaveAmara campaign, whose online petition has over 50,000 signatures. She also happens to look a lot like Jess, which is how she accidentally ends up sitting on a panel at ExcelsiCon in Jess’s place. Later, when Jess discovers that someone stole her copy of the Starfield sequel script and is leaking it on Twitter, she proposes to Imogen that the two switch places so that Jess has the time to track down the thief.

The Prince and the Pauper isn’t quite as ubiquitous a tale as Cinderella. I’m sure everyone knows the basic premise, and as the concept has been repeated many times, there is no one singular canon to adhere to, so there weren’t that many cheeky nods to the original story as there were in Geekerella. One thing that made me sad was that the people closest to Imogen recognize Jess immediately, but very few people who know Jess can tell that Imogen is not her. I tried very hard to suspend my disbelief, but for much of the book I sat there wondering just how much Imogen actually resembles Jess if that many people were fooled by the switch.

The Princess and the Fangirl, like Geekerella, features a romance between two women (actually, a couple!). However, in this book, it’s one of the main characters instead of two side characters. Jess, forced to man Imogen’s convention booth, ends up falling for Harper, her booth partner. There are no sexuality crises in this story – both girls are openly queer (Jess reveals in the first book that she’s dated women) – and the main conflict comes from the fact that Jess feels guilty for lying to Harper. Not only is one of the POV characters in a same-sex relationship, many of the side characters are as well. Imogen has two moms, her brother has a boyfriend, and Sage and her girlfriend make an appearance as well.

Extra points are awarded because both romances (because you know Imogen has one, too!) are interracial – Harper is black and Ethan (Jess’s assistant and Imogen’s love interest) is Asian-American, but both feel a little less natural than the one between Darien and Elle in Geekerella – probably because Geekerella took place over several weeks whereas this book is only a few days (it is set entirely at the convention). Also, the characters weren’t quite as endearing this time around and actually come off as judgmental in the beginning. Imogen decides she’ll use the opportunity to save Amara – over Jess’s wishes – and Jess is extremely dismissive of everything about the convention and Imogen in particular. They do eventually both come around, but for a while I wasn’t sure I would ever grow to like them, and that made reading the earlier parts of the book an exercise in frustration.

One great thing about The Princess and the Fangirl was that it dealt with a very serious issue that many actresses in sci-fi franchises (such as Daisy Ridley and Kelly Marie Tran) have to deal with – vitriol from the fans. The main reason Jess hates Starfield is that she only sees the vile parts – the hateful comments about her body, her face, her acting, the allegations that she is ruining the franchise – and this is something that Imogen faces while impersonating her. It isn’t solved in the course of one convention, but there are some pretty satisfying confrontations. This book also, like its predecessor, reminds its readers that celebrities are people, too, and that the image you see of them in the media is not always the truth.

While not quite as sweet as Geekerella, The Princess and the Fangirl is still a cute and entertaining read.

The Princess and the Fangirl by Ashley Poston is published by Quirk Books and will be available April 2 wherever books are sold.