Grab Your Glass Slippers and Your Convention Pass in “Geekerella” 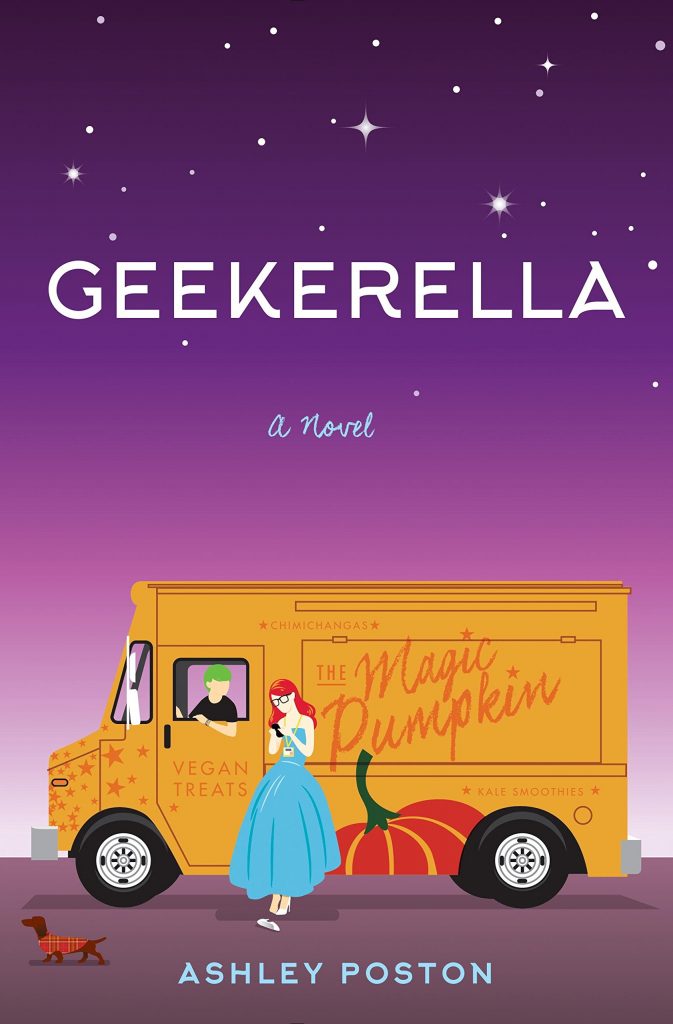 One of my favorite tropes in fanfic is the “famous AU” – when one of the characters is famous and the other one is not, and they meet through some bizarre coincidence. This is why I was so entertained by Geekerella, a modern-day Cinderella story with a geeky twist.

Geekerella is the story of Elle, who lives with her stepmother and two stepsisters and devotes much of her time to her blog about Starflight, the show she shared with her late parents. Her dad even started a convention devoted to it – ExcelsiCon. When she discovers a soap opera star has been cast as the lead in the movie reboot, she writes a blog post passionately arguing against it that causes her blog to blow up. Unfortunately, it catches the attention of Darien, the soap opera star who has just been cast in the movie reboot of Starflight, his favorite TV show. With the fandom so avidly against him, he tries to cancel his upcoming appearance at ExcelsiCon by texting the founder – only it’s Elle who has the phone. They begin to text each other when they need to talk about all the issues in their lives, though neither knows how connected they really are.

One thing I think author Ashley Poston did well was incorporate elements of the original story (or, at least, the Disney-fied version of the story) into her modernized one. There is no royal ball to attend, but there is a cosplay competition and masquerade that Elle is desperate to win for the prize money. She doesn’t have talking mice or a fairy godmother, but she does have Sage, her aspiring fashion designer coworker, who reworks Elle’s parents’ cosplay. There is no pumpkin turning into a coach – just the pumpkin-themed food truck in which Elle and Sage work. Not everything makes sense – I’m sure there’s an in-character reason why Elle’s shoes need to be “glass” but that’s never really specified – but most things were incorporated fairly well.

Some of the characters are stereotypes; Elle’s stepmother and one of her stepsisters are just horrid, not for no reason, but for a pretty stupid one. Darien’s agent/father is just as manipulative and conniving as you would expect a Hollywood stage parent to be. However, Elle and Darien are genuine and endearing – Elle clings to the fandom that is her last connection to her parents and Darien is fighting to be allowed to himself instead of just his image – and I really liked Sage, once Elle got over her preconceptions and gave the girl a chance.

Geekerella also touches on a topic that myself and many other female geeks deal with on a regular basis: gatekeeping. Truthfully, most of the gatekeeping is done to Darien – in a scripted talk show appearance, he has to miss a trivia question that he actually knows the answer to, and he spends the rest of the book defending his geek cred to people who dismiss him as a soap star. Even Elle does this as she takes whatever she sees in the tabloids as gospel. But there is an instance at the masquerade where a guy criticizes Elle’s cosplay and then assumes that she only became a fan because a cute actor was cast in the movie. My only gripe about this scene is that it is Darien, not Elle, who puts the creep in his place. Elle does eventually stand up for herself, though, so all hope is not entirely lost.

This story is wish fulfillment at its finest. I would never presume to speak for everybody, but I’m sure a fair few of us have fantasized about a situation like this, where a chance encounter lets us become friends with a celebrity. Put your skepticism aside and just enjoy this delightful and innocent romance peppered with enough geeky references (both real and fictional) to make you smile.

Geekerella by Ashley Poston is published by Quirk Books and is currently available wherever books are sold.

Previous:WonderCon 2019 Preview
Next: Assassin Nation #1 Review: This is Lit!