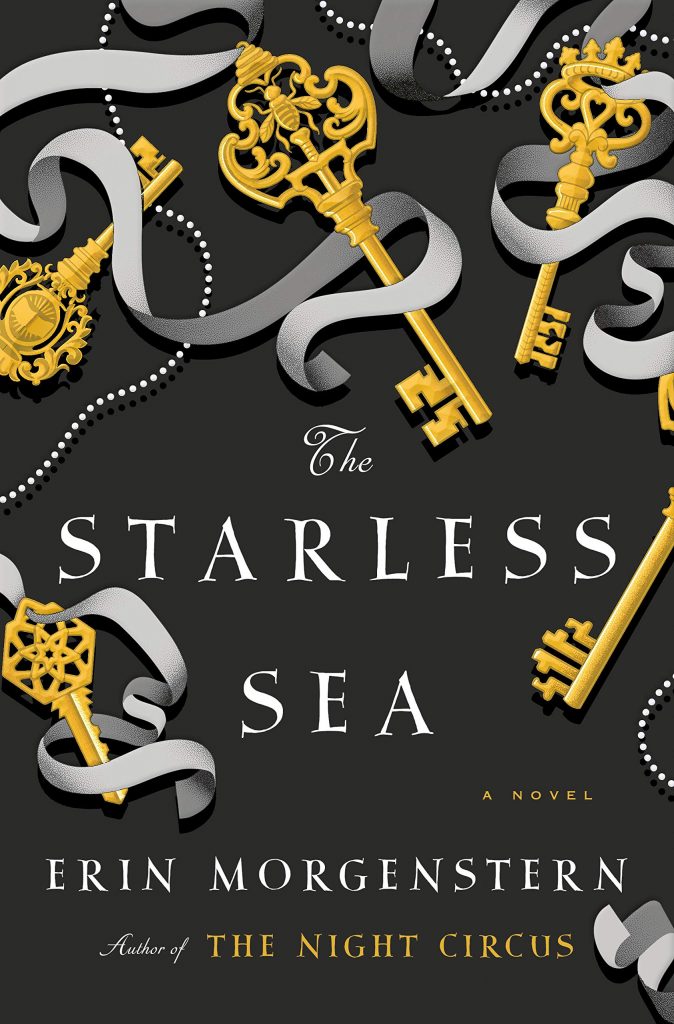 One of the books I was most looking forward to in 2019 was The Starless Sea, the long-awaited second novel from Erin Morgenstern, author of The Night Circus. Getting my hands on a copy was nearly an adventure worthy of the Harbor, and I’m very pleased that this book was worth the wait (and the frustration!).

The Starless Sea is a finely crafted lyrical fantasy about stories and how they can grow and change and take on a life of their own. The main story is about a grad student named Zachary Ezra Rawlins, who discovers an odd book hidden in the stacks at his university library which tells the tale of an endless library sitting on the edge of the titular sea.

There is no information on the book, and his quest to learn more about it tumbles him headfirst into a secret world of magic, bees, swords, and owls.

Interspersed with Zachary’s story are countless other fairy tales and legends relating to the sea and its many harbors, almost all of them featuring characters that eventually pop up in Zachary’s. They are all charming in some way – irreverent or comforting or wistful.

Everything is connected somehow, often in a way that doesn’t make sense until the very end of the book. It’s a very different take on the “chosen one” trope prevalent in many fantasy stories.

Zachary as a protagonist is not anything too remarkable, but that’s probably why I like him so much. He’s an introvert who likes books and video games, and one day he becomes so obsessed with something he ends up in another world. It’s entirely too relatable.

As for the other protagonists, I really wish we had gotten to learn more about Dorian. His backstory is occasionally touched upon but never really explored, and it all sounds so fascinating. It’s a shame we know so little about him.

Mirabel comes across as very “manic pixie dream girl” until you start getting into the roots of her history and discover that she has a very good reason for being like that.

And I realize that it’s sort of “the point” of the whole story, but I really wish there were more scenes of Zachary and Dorian together, because they are super adorable, and their story is at once tragic and inspiring and lovely. If you’re a fan of pining, this is pining with a side of angst and a dash of magical realism and wibbly-wobbly timey-wimey stuff.

One of the many things I loved about The Starless Sea is that it emphasizes the importance of choice. Fate does play a role, but only in giving Zachary options, never making his decisions for him. It also lingers briefly on the nature of the “right moment”; as a child, Zachary encounters a door that would have led him to the Harbor, and he chooses not to enter. When he’s in his twenties, he makes a different choice, and that may have made all the difference to the story.

It’s a sentiment I don’t see expressed very often, that just because you missed out on something once does not mean you won’t get the chance again.

This is a book for readers and writers and everyone who understands that stories are more than just words written down on a page. They can be sewn into our clothes or etched into our very skin.

The nonlinear storytelling might throw some people off, but I think it helps lay the groundwork for the climax quite well. I had a few “aha!” moments while reading that I don’t think I’d have had if this was laid out more traditionally.

The Starless Sea by Erin Morgenstern is published by Doubleday Books and is currently available wherever books are sold.