I’m just a little bit behind on The 100. So when The 100 Season 6 trailer dropped earlier today, I had to go read some recaps to find out what I’d missed. Whoo boy. Looks like I need to catch up before April 30.

The 100 has never not been a post-apocalyptic action series. From the very beginning, these people have had to fight every step of the way just to stay alive. The 100 Season 6 trailer however, seems to indicate that we’ll be slipping into a horror film. From the chilling music to the voiceover from a dead character to the too-good-to-be-true city actually named Sanctum, the next season of The 100 has scary movie written all over it. 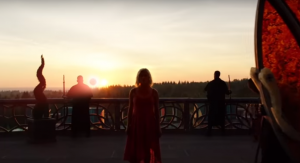 One thing I can tell from The 100 Season 6 trailer is that this looks almost like a completely different show, and it’s not just the different vibe the trailer gives off. Considering the native species of this planet looks exactly like humans, The CW has managed to create a world that just appears different. Perhaps it’s the use of color when the Earth we’ve seen for the past five seasons has been so dark and colorless. Perhaps it’s the lighting. Perhaps it’s the general atmosphere. Whatever the reason, this trailer shows us a new world and I totally believe it’s alien. 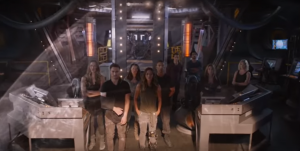 The fighting is something that I could honestly do without, mostly because I’m over it, but the idea of the characters fighting their inner demons is fascinating. A lot of these characters need to atone for their actions – not just Clarke, who is getting the bulk of the bile in the trailer – and I would love to see them face what they’ve done. No one has the moral high ground among this group, and they all need to realize that. Perhaps uniting against a common enemy will force them to get over their individual issues with each other.

Honestly, I was starting to lose interest in this show. It was devolving into misery!porn and I was tired of watching everyone suffer constantly. Season 6 doesn’t look like it will be any happier for our characters, but it looks far more interesting than the past few seasons have, and I am intrigued and excited in a way I haven’t been since before season 3. For the first time in years, I am very much looking forward to the season premiere.

My one complaint about The 100 Season 6 trailer is that it’s too long. This has been my issue with previous seasons as well. They could have cut about two minutes and still conveyed the overall arc of the season.

Have you seen The 100 Season 6 trailer? What did you think? What are your predictions for this next season? What do you hope to see?

TOPICS the 100The CW

Previous:Dark Fantasy Action RPG “Warlander” Announced For PC!
Next: Touch Up Your Cosplay for “The Princess and the Fangirl”