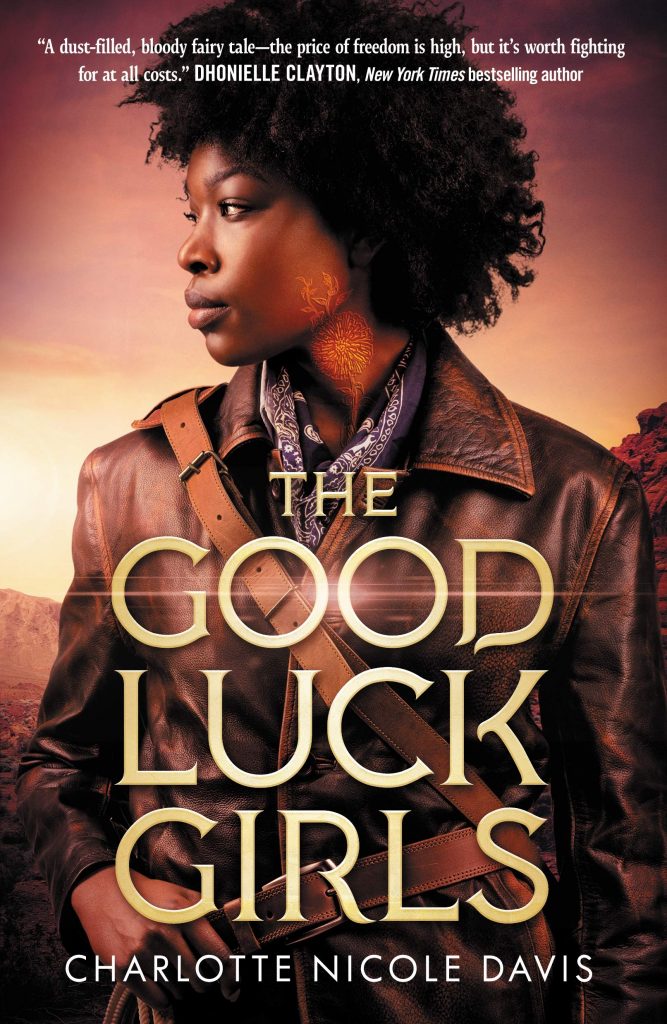 In this time of political uncertainty, it feels like women – particularly women of color – are being attacked just for their very existence. Join the fight with a group of girls who are ready to take back their future – The Good Luck Girls.

The Good Luck Girls, by Charlotte Nicole Davis, is the story of five teenagers who are “employed” by a “welcome house”, but it’s more accurate to say that they were sold into those lives. Branded with cursed markings that both prevent them from leaving and identify them to everyone in the country, Aster, Clementine, Violet, Mallow, and Tansy make a break for it after Clementine accidentally kills the young man who bought her “lucky night”. Pursued across Arketta by the dead man’s family as well as the supernatural security guards from the welcome house, the five girls are chasing the barest wisps of a fairy tale that may be their salvation but may also lead to certain doom.

It seems to be a popular theme in YA literature of late – Handmaid’s Tale-esque stories where young women are forced into the modern-day slavery of non-consensual prostitution. Sex trafficking is a very real issue and makes a disconcerting premise, at least for me. On the whole, it feels so hopeless to be unable to combat what is (and has been for years) an ongoing, global issue, so sometimes it’s actually cathartic to escape into a world where the girls are able to fight back. In the case of The Good Luck Girls, they are smart, resourceful, and determined, taking the opportunity presented to them by Clementine’s accidental homicide.

The girls’ story is a mashup of many different genres, with a wild west setting for a non-traditional fantasy story. This is what would happen if Thelma and Louise found themselves in the Republic of Gilead. Featuring supernatural antagonists and a political system we’ve just barely scratched the surface of, Davis has created a world where the girls’ options are extremely limited, but there is still hope to be found. It’s plot-driven as well as character-driven, and focuses on the relationships between the five girls rather than any romance. (That said, there are two romances – one between Clementine and Zee, a young man looking for his sisters who offers to guide the girls through the wilderness, as well as one between Mallow and Tansy.)

Davis has crafted some extremely wonderful heroines with distinct voices and personalities (although Mallow and Tansy are always together and as such often treated as a unit). Despite the horribly misogynistic situation in which these girls find themselves, there is still a powerful feminist message. This world is brutal and hard, but these girls fight for each other, they stick together, and they’re determined to get each other through – even when they don’t necessarily like each other. This is a story about young women seizing their power back from men at any cost, and they’re willing to die free rather than lives as slaves.

This is a book revolving around uncomfortable subject matter, but there’s an undercurrent of power and hope as well. With a diverse cast and a little bit of queer representation, this is a fantasy for young girls who need some heroes to look up to.

The Good Luck Girls by Charlotte Nicole Davis is published by Tor Teen and is currently available wherever books are sold.

Keep your eyes peeled for our interview with author Davis from NYCC 2019!

Click here to learn how you can help victims of sex trafficking.