Age of Resistance Review: THIS Is How You Do a Prequel

I don’t think I’ve ever been more excited for a streaming series than I was for The Dark Crystal: Age of Resistance. The 1982 film was a huge part of my childhood (it’s as old as I am), and knowing that so much of the original creative team was returning for The Dark Crystal Netflix series heightened my excitement. There was no way this was not going to be an outstanding marvel of creativity set in an epic fantasy world.

The Dark Crystal: Age of Resistance is a prequel series set many years before the original Jim Henson film. This is the world of Thra before it has died completely, strangled under Skeksis rule. Now, in The Dark Crystal Netflix series, we get to meet the Gelfling, who have not yet been hunted to extinction, and learn more about their society. Gelfling society is matrilineal and consists of seven very different clans, each ruled by a Maudra, who are then ruled over by the All-Maudra. (It’s so refreshing to see a series full of so many amazing female characters. It’s also refreshing that no one thinks twice over the fact that Deet has two dads.) The ten-episode first season centers on the idea of rebellion, fostered and led by three Gelfling – Rian, Brea, and Deet – from different clans who come together with one simple truth: they have been lied to all their lives. 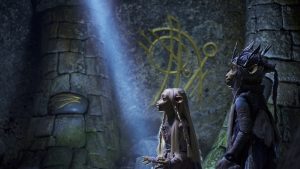 Those who have seen the film understand the weight of this knowledge, but for any who are unfamililar: the Skeksis have corrupted the Crystal of Truth, harnessing its energy to extend their lives. Once they realize that the crystal is no longer providing, they turn to alternate methods: draining essence from living creatures, particularly Gelfling. In the first episode, “End. Begin. All the Same.”, Rian (Taron Egerton) discovers this terrible secret when he watches the Skeksis drain his girlfriend, Mira. Meanwhile, Brea (Anya Taylor-Joy) has a vision of a symbol after demanding to know the truth, and Deet (Nathalie Emmanuel) is told of the Darkening by the Sanctuary Tree, guardian of Thra.

This first episode sets the tone for the entire series. I thought I knew what this series would entail; it’s the story of a Gelfling rebellion, rising up against Skeksis rule, but you know that they were ultimately unsuccessful. There are only two Gelfling left in the film. I was so surprised, watching this series, with how much hope they were able to infuse in a story that should be very hopeless. The Dark Crystal Netflix series manages to be incredibly nostalgic – watching this is so very like falling back into the original film – and also incredibly relevant. It’s about rising up against an unjust society, but it also explains how such corruption is able to occur. The Skeksis lied to get into their positions as “rulers” of Thra; they turned the Gelfling clans against each other and gaslit all the characters. They spread lies to curtail the effect of the truth. It’s so frustrating watching characters like Seladon (Gugu Mbatha-Raw) buy into the lies, dismissing the words of people she loves and trusts because it goes against what she’s always believed. It feels very much like what is happening now, which makes it honestly all the more depressing when you remember that, eventually, they lose. 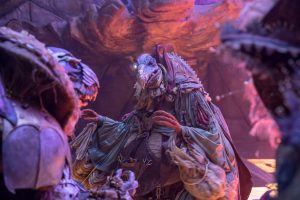 It’s a very dark series – darker perhaps that the movie – and there are elements of that failure, particularly in the final episode, “A Single Piece Was Lost,” which can both ties into the film and sets up a second series. The stakes are very real, and even though I know the outcome, I couldn’t help but root for the Gelfling. But there is a darkness in this series that I think is heavier than it was in the original film. You know the Skeksis are evil, but to see their cruelty and their callousness in this fashion is almost off-putting; this is not a series meant for young children, and I wouldn’t recommend watching it before bed, either. I have been terrified of The Dark Crystal for much of my life, and this series only amplified that fear. The Skeksis are monstrous in more ways than one.

There are moments of levity, however. Throughout the series there are little patches of humor, but “Time to Make…My Move,” when the main Gelfling trio journey to the Circle of the Suns and meet the Heretic (Andy Samberg) and the Wanderer (Bill Hader), is almost a comedy. That was probably my favorite episode; their puppet show of the history of Thra (puppets using puppets!) is one of the best sequences in the series.

Everything in The Dark Crystal Netflix series was built. It’s a world designed virtually entirely by Brian Froud, and the entire family (including son Toby, aka the baby in Labyrinth) was involved in bringing Thra back to life. The character designs are based on those from the original film, especially the Skeksis, many of whom are characters you recognize from the movie. But it’s more than just the puppets, it’s the sets, it’s the costumes, it’s everything. Nothing is in this series that isn’t purposefully put there. Graphic designers created a written language for the Skeksis that would simply feature on a few props – like the book that Brea is reading in the first episode. But there was also a spoken language created for the Gelfling and the Podlings. (The Podling language was actually created by YA author J.M. Lee, who writes The Dark Crystal books.) The craftsmanship on this series is astounding; the care and the level of detail are absolutely mind-boggling, and the final product is such a culmination of creativity and ingenuity that it will surely inspire others. The rewatch potential is huge; I can’t wait to watch it again and see what I missed the first time. 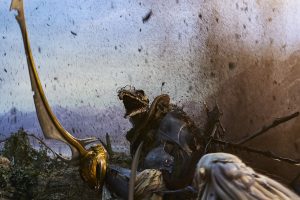 And you wouldn’t think that a movie where the main cast are puppets would be so action-packed, but there are some amazing action scenes that when you watch, you’ll sit there and wonder, “How did they do that with puppets?” The puppeteers are unbelievable; there is so much emotion and soul in these characters that are made of latex and fabric. A lot of credit will go to the voice acting, but the puppeteers deserve as much credit as possible for bringing these characters to life.

Still, though, the voice acting is phenomenal. I have to give particular props to Simon Pegg (Chamberlain) and Donna Kimball (Aughra) who sounded so much like Barry Dennen and Billie Whitelaw that I still have trouble believing it wasn’t them, even after seeing the behind-the-scenes documentary showing Pegg in the recording studio. (P.S. I highly recommend checking out the documentary, The Crystal Calls Making the Dark Crystal: Age of Resistance.)

So much of The Dark Crystal: Age of Resistance harkens back to the original film. It’s more than the characters; it’s also in the score, which is beautiful and haunting. (I watch with closed captioning and most of the time it just said “foreboding music”.) Some of the questions from the movie are answered: Where did the Garthim come from? What is the deal with the Shard? Why did they start draining Gelfling? Even the episode titles serve as callbacks; some of the titles come from the prophecy (“What Was Sundered and Undone”, “By Gelfling Hand…”) but some are quotes from the film (“Prophets Don’t Know Everything”). This is a series that is very aware of where it came from.

The Dark Crystal Netflix series is an enthralling, all-encompassing journey into Thra. You will feel for these characters. At times you will probably forget that they’re puppets. You do not want to miss out on this completely engaging fantasy series. Honestly, other studios should take note: this is how you do a prequel. It’s obvious that this series was a product of love and that everyone involved was committed to making it the best that it could be.

The Dark Crystal: Age of Resistance is currently streaming on Netflix.