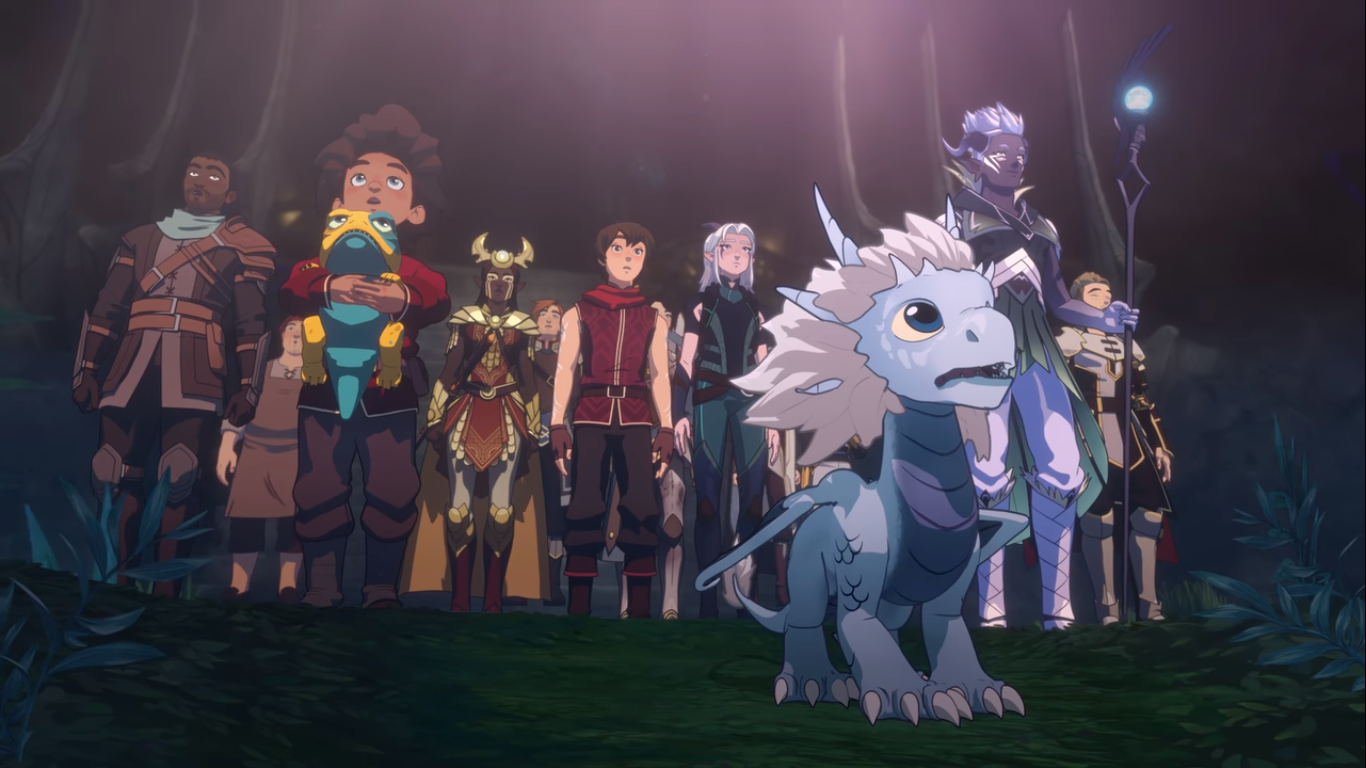 The Dragon Prince Season 3 is full of action, adventure, romance, humor, and above all, the message that even though it is often the more difficult route, working together is better than fighting each other.

The Dragon Prince Season 3 jumps back and forth between Rayla and Callum trying to get Zym back to his mother and the power struggle happening in Katolis. At times, the point of view switch could feel a little jarring, but on the whole, I think they were able to find the balance pretty well.

I love that they expanded the world and that we finally got to see Xadia. Both stories were equally compelling, and both focused on different aspects of the same thing.

The important moral imparted by this season is overcoming preconceived notions and looking past your biases to find what you have in common. The two sides you thought were going to exist after the trailer dropped turned out to not be exactly the case. 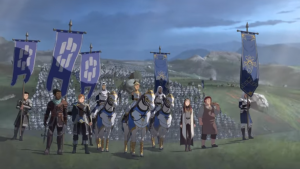 On the one side, you have Xadia, the kingdom of Duren, and those from Katolis who laid down their arms, united in their goal to stop a war. Unfortunately, they must fight the war in order to stop it.

I don’t know if they’re trying to say that sometimes war (or conflict) is inevitable, but I do believe that the fact that enemies – humans and Elves – joined together for a common good is the important thing to focus on.

This was mostly achieved by being truthful and brave and kind. The dragon that our heroes freed in season 2 came back to help; Amaya tried to warn the Sunfire Elves about Viren, which led to her winning them over. Ezran wanted to make sure people didn’t have to fight if they didn’t want to, which led to them rallying to his cause at the end. And Soren fought against his family because he saw through his father’s machinations.

Also, yay for Aanya coming back! 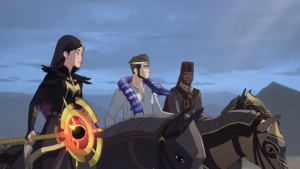 On the other side, you have most of the human kingdoms, led by Katolis – in this case, led by Viren, and by Aaravos. As Soren said, Viren is very good at convincing people, and the more power he gets, the more people will believe him and follow him.

Viren is an extremely good villain, because he sounds so reasonable you don’t even realize that his motives aren’t pure. He is a very good example of how detrimental populism is in leadership, as well as being an example of how simple it often is for dictators to come to power.

It’s even more obvious than it was last season that he’s being set up as the main villain, especially after that last scene. He’s being manipulated a bit by Aaravos, who seems to be calling most of the shots, but I think in his case, he’s willing to be manipulated, because it gets him what he wants.

Aaravos, of course, is still shrouded in mystery. We haven’t learned much more about him other than the fact he is at least several centuries old and the late dragon king imprisoned him somewhere.

I still think we’re not learning the whole truth of what happened to Sarai. Viren is not the most trustworthy person, as we know, and now we’ve learned he literally stole Sarai’s last breath so he could do a spell to defeat the dragon king. It makes me wonder if he had more to do with her death than he told Harrow.

I wonder how long Viren has been on the quest for more power. Harrow was reluctant to mount an offensive against Xadia and disrupt the peace until Viren convinced him to do so. 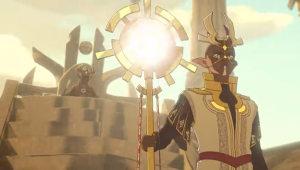 We did get to learn more about Sunfire Elves in The Dragon Prince Season 3, which I was very excited about. We got to see their kingdom and meet their queen, and we learned that apparently Aaravos had something to do with the death of their former queen.

We also got to meet more Moonshadow Elves, and Runaan’s husband (!). I liked getting to see the contrast between their societies. I wish we’d gotten to see more Moonshadow Elves than just Ethari, but it was still very interesting to see how they hide their village, even in their own land, while the Sunfire Elves have a giant citadel that is rather ostentatious and obvious.

I also thought it was very clever how Rayla was made a “ghost” because they thought she’d abandoned her comrades.

Speaking of contrast, I can’t get over the contrast between Callum experiencing Xadia and Claudia doing so. When confronted by the adoraburrs, Callum took some with him, yes, but it more seemed that they were accompanying him.

Claudia, meanwhile, captured one in a jar. The look on its face when she trapped it told you all you needed to know. Knowing Claudia’s penchant for crushing things to siphon off their magic, I don’t think anything good happened to that poor thing.

I wish there had been more of Callum learning magic. I was expecting that to be a bigger part of this season. Although, mage wings… pretty cool.

Before I get too far away from it, I obviously have to talk about the added LGBTQ+ content in The Dragon Prince Season 3. They gave Runaan a husband! Yes, he was only in one episode, but at least he’s still alive, which is more than I 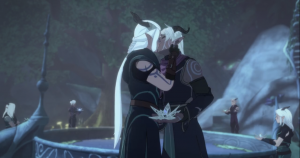 can say for the queer characters introduced last season.

Runaan is still alive (I loved the focus on his flower thing in the fountain) and trapped in the coin (and now Rayla knows about it), so I expect him to come back at some point, which hopefully means Ethari will return, too.

And two men kissed! Yes, they’re Elves and not people, but two men kissed in a children’s cartoon. (We… don’t talk about the other time that happened.) It was very casual and natural, exactly the way it would have been handled if Runaan had a wife and not a husband. I hope that when Runaan is freed, he becomes an important part of the story.

On a related note, even though I suspected someone would find Gren after they discovered the hidden staircase, I was still surprised when he just showed up at the Breach. I half-expected it to be some sort of trick to get to Amaya. 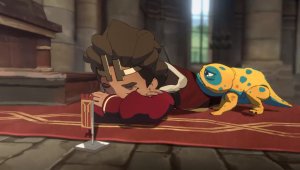 Rayla and Ezran had similar arcs this season about living in the shadow of their parents. In Ezran’s case, he didn’t want to repeat his father’s mistakes and seek vengeance, resolute and sure in his quest for peace. In the end, he abdicated the throne in order to spare his kingdom a war, only to have Viren lead them straight into another one.

Rayla, meanwhile, has long believed that her parents fled their posts, so she, too, did not want to repeat their mistakes. Only they actually died trying to save the egg, which led to her wanting to live up to their example.

I really liked Soren this season. I wasn’t sure to feel about him in the first two seasons, and I worried about him after what Claudia did to heal him at the end of season 2. In retrospect, I shouldn’t have been surprised. He was questioning his father’s orders from the beginning, although he still attempted to carry them out, and he really came into his own in The Dragon Prince Season 3.

Claudia, on the other hand, is still blindly loyal to her father. She believes that he is only doing what he needs to do to save humanity.

I found the romance subplot to be fairly well done. I’ve sort of been expecting it. Rayla and Callum’s growing feelings for each other haven’t exactly been subtle. At the same time, I wasn’t sure if it would actually happen, at least not this soon. But I thought it was a natural progression, and there were a couple of false starts that made it feel more realistic. 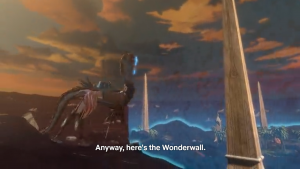 There was a lot of humor this season. Last season had that great Lord of the Rings joke, but this season seriously made a “Wonderwall” joke and an Indiana Jones reference. I laughed out loud at both, even though I was currently on an airplane and got weird looks.

I’ve never been a fan of some of the more juvenile humor (fart jokes are not my thing) but there is enough clever humor in this series that I can overlook it. Also, it is meant for children, who tend to find that kind of stuff funny.

All in all, The Dragon Prince Season 3 proves that this series is constantly improving. With added representation, more backstory, and expanding the world, we’re seeing just how big this story is going to get.

I am extremely excited to see where we go from here. Does Rayla figure out how to save Runaan? Will the transformed soldiers go back to normal? Just who is Aaravos? I can’t wait to find out!