After watching Chapter Two of The Mandalorian, I have to say that Chapter Three didn’t go quite as I’d expected – but for the most part, that was a very good thing. 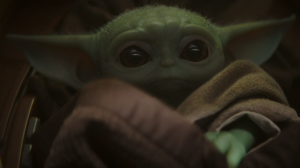 I mean, I can’t be the only one who was surprised that he actually delivered Baby Yoda to The Client, right? Especially after seeing that adorable ‘child’ play with a little ball from the top of a lever in his ship?

Yes, yes, I know it had to happen, but who wasn’t angry when the Mando just walked away with his payment, rather than changing his mind right then and there? Was this show TRYING to break my heart with that moment when he and Baby Yoda locked eyes (so to speak) at [what I couldn’t possibly believe was] their final goodbye? No wonder this episode was titled “The Sin”.

Chapter Three continued with the titular character turning his payment over to his fellow Mandalorians, a scene that also featured some more flashbacks of the Mando’s past. Everything there’s a bit by the book, if you ask me, but at least we got a tiny bit more insight into this Great Purge.

So the Mando earned an awesome new getup, but instead of taking off to actually collect his next bounty, he had a change of heart about leaving Baby Yoda behind (which was, let’s be honest, expected). And what happened next was, in my opinion, a huge turning point for The Mandalorian – not just in terms of story and character development, but in the overall mood of the show.

Seriously, the second half of this episode was absolutely amazing. Close-quarters fighting with Stormtroopers followed by a big bounty hunter firefight in the streets? Let’s just say that I’m a much bigger fan of these kinds of action scenes over Chapter Two’s beast-centric one. 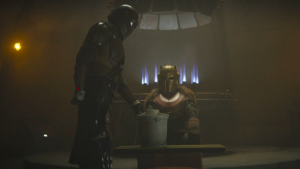 Of course, the Mando was going to survive (it’s only the third episode, after all), but there was still great tension in these scenes – and the mystery of HOW he would survive when it seemed like the odds were completely stacked against him.

Enter his fellow Mandalorians, who helped him escape despite the fact this means they will have to move their hideout, because “This is the way.” It was a great rescue, gave viewers just a bit more insight into this secretive group, and yes, I was maybe too amused by the Mando’s quip about needing a jetpack.

And when the Mando gave the little ‘not a toy’ ball back to Baby Yoda? Be still my heart.

Overall, while I felt like Chapter Three was a bit slow to start, the second half of the episode more than made up for that. It didn’t even really end on a cliffhanger, but the fact is, it didn’t have to – not to keep me from wanting more.