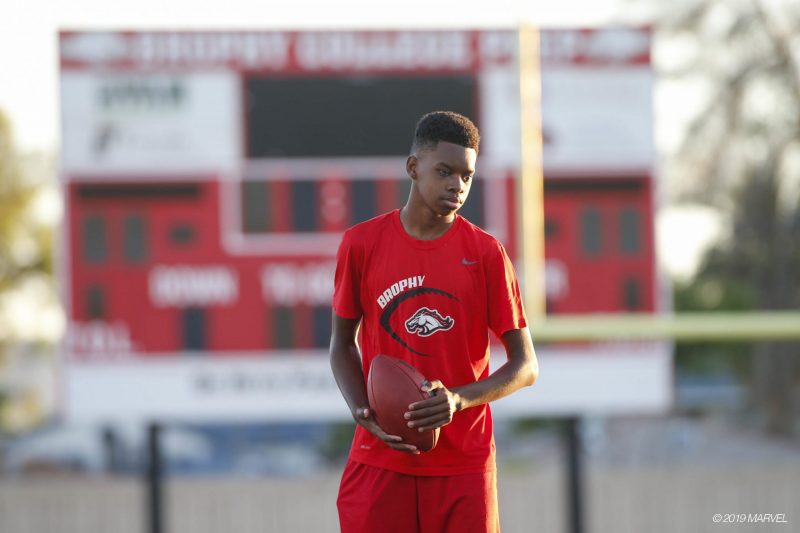 As much as I’ve been enjoying Marvel’s Hero Project, I was a little unsure going into ‘Unstoppable Adonis’. Marvel has been great so far about hyping these kids’ accomplishments without crossing the line into sensationalism, but I wasn’t sure how that would work with this story.

We do get free screeners for Marvel’s Hero Project from Disney+. The fangirling is all me.

First off, I want to give everyone a head’s up. This is one of the more intense Hero Project episodes. ‘Unstoppable Adonis’ is something Adonis made himself into through force of will and determination. He has a focused intensity about him that, while it’s very compelling, keeps the emotional impact high. So, you know. Be aware.

Adonis’ parents, Veronica and Marvin, seem loving and intensely supportive. The whole family has a playfully competitive vibe. Despite how close they seem now, Veronica and Marvin do not cut themselves any slack when talking about how badly they took his early years of blindness. They’re very upfront about the dozen or so surgeries Adonis had before he was ten, and how badly his dad took the diagnosis of glaucoma.

Veronica stares right into the camera as she lays out where they were at one point: “There’s a time in our lives where we look at our family pictures and there’s no family pictures. There’s no pictures of Adonis, because we didn’t want to take pictures of him blind. We were waiting for him to get his eyesight back.” 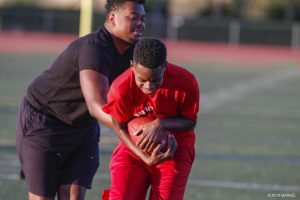 Older brother Jordan running plays with his brother is both inspiring and intellectually interesting.

Wow. I mean, to put that kind of raw struggle out there… I can’t help but think of how this is a healthy way to present their situation. It’s not the smug “look how amazing we are for caring for our disabled child, aren’t we great” attitude you see sometimes. It’s not a Pollyanna-ish “everything is easy when you love your kid” motivational story. They had trouble, they fought through it, and in the end, they realized that Adonis himself needed to be their guide in how to proceed.

What Veronica and Marvin share feels like something that will connect with similar parents, something that will tell them, “Hey, we’ve been there, we’ve done that, but having a disability is not the end of the world you think it is, and if you just listen to your kids maybe you’ll see what you’re doing is for you and not them.” The episode rightfully focuses on Adonis, but I think it’s really brave for his parents to share this with the whole Disney-watching world.

At one point Adonis and Veronica discuss how he put his foot down about more surgeries. He talks about how they were making him miss his life and the things he loves. Adonis hits on a big thing here: sometimes we’re trying so hard to fix things we see as wrong with ourselves instead of just trying to be good people and move forward with what we want in our lives.

Something else stands out in ‘Unstoppable Adonis’. Everyone keeps enthusing about how brave he is to be running down a field he can’t see, and real talk that’s amazing. But there’s another kind of bravery that shines through in every scene he’s in. Adonis is someone who seems to be comfortable, or to have made himself comfortable, with connections.

That’s physical connections, like when he casually reaches out to get a hand over to a huddle, and emotional connections, which we see when his friends talk about how they can turn to him for advice or support. He’s a super competitive dude in a highly physical sport, but he’s not afraid to build those relationships and community supports that will help him succeed. 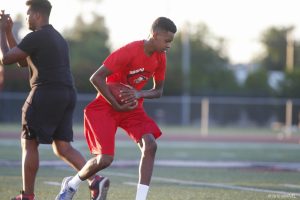 Watching Adonis, you get a sense that he knows every inch of the football field through sheer practice and memorization.

Probably what a lot of people are wondering is, how does a blind dude play football with sighted people? I assumed he was doing the same thing blind runners do- that is, using a pole or a hand guide. Adonis does that when he’s running races or walking around the field between plays. But during the games, he’s alone. How does that work?

A camera person asks about this, specifically how he learns plays. Adonis says casually, like it’s nothing, “I just listen to them. Based on the descriptions, I imagine them in my head. It’s about just practicing and figuring out where I’m supposed to be at what time.”

Dude, how even. So much respect here, because Adonis is putting an incredible amount of mental and physical work into his game.

Moving on to the comic- here’s where I struggled. I’m a big fan of audio comic shows like The Comicstorian, but aside from niche outlets like that there just aren’t a lot of resources for visually impaired comics fans. There really are no good places for blind geeks to get comics easily. I wasn’t sure how Marvel was going to present Adonis with his comic in a way that was meaningful and respectful to him.

In a producer segment, Joe Quesada and Stephen Wacker do talk a little about the challenges in putting ‘Unstoppable Adonis’ together. For one, Braille needs so much more space than straight text. For another, the panels need to be described in a clear, compelling way. That adds to the amount of text the creators have to fit in. 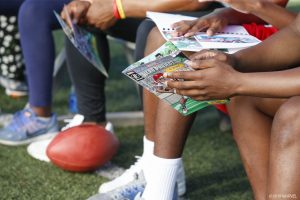 There’s a traditional comic Adonis can show his sighted friends, but also something tailored to him that looks like something Marvel could do for more trade collections.

I won’t spoil what they came to, but I think it’s a cool solution. Though I don’t know if it would work for weekly issues, I could see something similar being possible for trade collections.

Adonis seemed a little stunned by the presentation. “It was just surreal, knowing that the same people who were doing Black Panther and Avengers was like, working on a whole thing just for me.”

He had a little surprise at the end that I think blew his mind. Kid’s stoic in the way that a lot of high-level athletes are, but there’s a moment where you can see him light up from the inside.

I almost did a little eye roll at the surprise- almost. Really, I think it was handled well mostly thanks to the person in question, who played it chill and didn’t talk down to Adonis.

That’s kind of my feeling about the whole Hero Project as it evolves, actually. So much of this could be cloying, it could be sensationalized and condescending. Instead it feels real and grounded and personal, and that’s mainly thanks to Marvel’s decision to let the Heroes and families speak for themselves, however they want to do it.

Victoria and Marvin wanted to talk about how they couldn’t accept Adonis’ blindness for three whole years, so that’s what we see (and what makes their current support so impactful).

Jordan even gets to read the presentation letter because that would matter to Adonis, even though Jordan seems a little self-conscious (you did awesome, my dude).

This is how you responsibly tell stories with real emotional impact.

If you want to know more about Unstoppable Adonis you can check out his comic.  There is an audio version, too, for this and all the Hero Project comics. Also, look at our other reviews to hear about Incredible Elijah and Sensational Jordan.