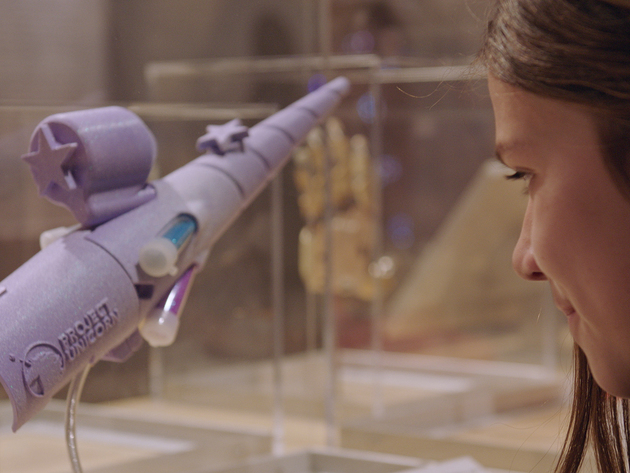 I have had zero chill about Marvel’s Hero Project from the moment I heard about it. Who doesn’t want their own comic book, and how cool is it to see that dream happen to kids who are doing a hero’s work in the real world? Now that the first episode, ‘Sensational Jordan,’ is available for streaming, I’m happy to report that the show lives up to the hype.

I was provided a free screener of ‘Sensational Jordan’ by Disney+ for review. The opinions are my own.

First off, ‘Sensational Jordan’ surprised me by being, well… not sensational. I’m not saying Jordan herself isn’t amazing, because she really is. She’s awesome. Five minutes into the show you get the idea she’d be fun to hang out with, and she has an unexpectedly sharp wit. I laughed out loud when she was imitating The Look people give her when they notice her arm.

Maybe instead of “not sensational” I should say, “not sensationalized.” That’s such a relief. If you read our earlier coverage, you know I had a concern that Hero Project would be one of those fawning, “look how amazing these people are for living their lives, brave little soldiers” shows that abled people make to feel better about themselves. Watching “Sensational Jordan” put those fears to rest for me.

There is a little framing bit at the beginning where a team of Marvel talent and executives introduce the episode. We see Sana Amanat, Stephen Wacker, Sarah Amos, and Nick Lowe discussing Jordan’s project.

They compare her to Shuri, which… yeah. I see that. Shuri would love Jordan. Those two would disappear into a lab for a week and come out having planned a free engineering summer camp in Wakanda. Maybe they’d also invent something to solve global warming, just as a side project.

Beyond that, it’s all Jordan and her family. We don’t have a narrator telling us what to look at and how to feel. The only time we even hear from the creative crew is when they’re talking about putting her comic together. (There is one part where a camera person asks Jordan about something she said, but other than that they’re quiet.)

For the rest of the episode, Jordan and her parents talk about her life, how she came to design her incredible glitter cannon, and how that led to helping other kids follow in her footsteps. Jordan comes off as generally positive and determined, but the producers don’t try to make her too… can I say Disney-fied when this show is on Disney+? You know what I mean, though. She just seems like a smart, regular kid — a little nervous or unsure sometimes, super embarrassed when she’s given an awesome gift on stage, happy where she is and interested in doing more. Giving her the agency to tell her own story, the way she wants to tell it, is the difference between the show being inspiring and the show falling into the ableist abyss.

Phew. Bullet dodged there, so let’s move on to reviewing ‘Sensational Jordan.’

I think the scenes where Jordan is adjusting and improving her glitter blaster have a strong early Iron Man-style to them. Seriously — the one that’s like a ring of smaller barrels reminds me of the arc reactor Tony built in the cave, and when she’s focused on designing she has that “absorbed genius” thing going on.

Her mentor, Sam, also comments on her drive during the episode: “She’s greeting me with ideas before we can even say hello to one another.”

Jordan is straightforward about where her insight comes from: “I think by me growing up and having to figure things out in a different way than anyone else has given me the design thinking and the maker thoughts.”

Accurate, girl. She hit on exactly why we need to promote inclusivity in design schools and projects. Diversity creates a wider pool of experience, which leads to better design for everyone.

There are some family moments sprinkled in that are unexpected but perfect. I know it’s a TV show, but I don’t know that people could fake being so cool and connected with each other. Jordan’s family is very personable and funny.

I thought it was great that her brother Cameron is in support mode. My siblings would be trying to sneak some of the spotlight for themselves (they’re obnoxious and I love them), but Cameron just hangs out with his sister. The most he even says is, “My sister is a superhero. I mean, she already was, but now we have proof.”

The scenes where Marvel VPs are going over the plan for Jordan’s comic and pointing out the ways they tailored it to her personal preferences did come across as kind of scripted. I’m going to give them a pass on that, though. It looks like they put a TON of work into trying to make a comic Jordan herself would feel represents her. There’s just no way to point all those things out casually.

The Big Marvel Reveal happens at an event for limb-difference designers during the Cambridge Science Festival at MIT. Fancy, and also thematically appropriate. Jordan has just finished her presentation when Jen, her mom, steps out to do the presentation. That creative choice shows sensitivity. The spotlight is on Jordan and her work instead of Marvel going, “Hey look at us doing this cool thing, aren’t we awesome?”

Because we get to focus on Jordan and her family for the whole episode, this moment is really moving. You can hear the pride in Jen’s voice as she reads the letter. You can see Jordan’s mixed embarrassment and happiness when she sees the comic book.

Speaking of that letter, though… wow, was it long. Lots of cool stuff, but SO MANY WORDS! Jordan saw the Marvel logo and immediately got excited, then had to stand there on stage dying a little waiting for what came next. At least the box doesn’t show up until she can open it.

Once the box is opened, the other kids come up on stage to get their own copies of the comic and they sit around reading it. One girl gets excited over a mannequin in “Jordan’s lab” that has one arm. That’s where I realized what I probably should have earlier… this happened at an event for kids with limb differences. The comic is about Jordan, but it’s also for all those kids. There’s now an official Marvel superhero — actually official because you can go to the Marvel website and read this comic — that looks like them, and that’s important. That’s powerful.

SO. What does Jordan think of this whole thing? In her words: “People see what I’m trying to change in the world. It’s just really cool to know that.”

Watch the trailer for ‘Sensational Jordan’ below. Then just go over to Disney+ and watch the whole episode. It’s definitely something that will make you feel like the world is a better place because people like Jordan are in it and being recognized for the right reasons.

Marvel’s Hero Project is off to a strong start. Check back with us when ‘Incredible Elijah’ drops on Friday, because we have an interview with Elijah himself to share!

What did you think about ‘Sensational Jordan’? Let us know in the comments!